Does a range hood waste a lot of energy? 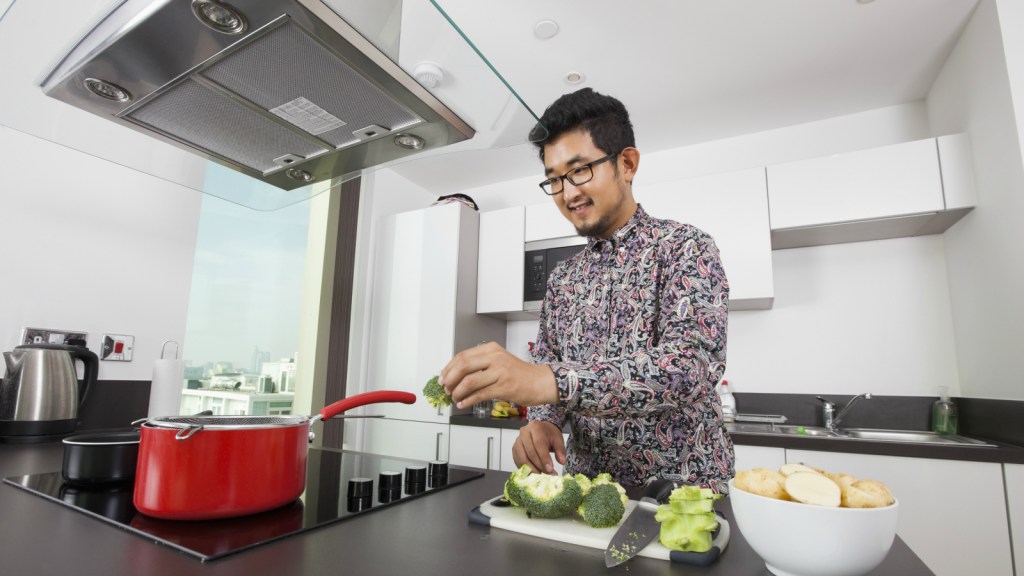 Does a range hood waste a lot of energy?

When I’m cooking and using the vent over the stove, I wonder how much energy I’m wasting. Leaving cooking odors out of the equation, is it better to run the vent and remove cool, air-conditioned air along with the hot? Or allow the heat to escape into the house to be dealt with by the air conditioner?

Once in a great while, I have a hankering for a nice, juicy steak (organic, local, grass-fed, and free-range, mind you). And I cook up a mean one in a cast-iron skillet, if I do say so myself. The secret is searing the meat over blisteringly high heat to lock in the juices — a move that also results in lots of smoke. My neighbors always know when I’m cooking my yearly rib eye by the piercing whine of my smoke alarm. In other words: I know the value of a good range hood.

But there’s a lot more at, er, stake here than annoyed neighbors. Your question pits clean indoor air against the efficiency of your cooling/heating system: Which should we prioritize? Let’s get cookin’.

You’re right, Teresa: Flipping on your range hood (or stovetop vent, if you prefer) will indeed make your AC or heater work harder, depending on the season. If you have the type that shoots your kitchen air outdoors — and I hope you do, as it’s much more effective than a ductless hood that merely recirculates air around your home — that air needs to be replaced with an equal volume from outside. When it’s hot out, the fresh air sneaking in through the cracks of your windows and doors will need cooling, and vice versa in winter. It’s the same thing that happens when you turn on your bathroom fan.

And if you have a tightly buttoned-up, well-insulated home, running a powerful range hood can cause an unfortunate phenomenon called backdraft, in which that makeup air can’t get in through the usual nooks and crannies and instead gets sucked in via your chimney or water-heater flue — bringing soot and contaminants along with it. (Adding or adjusting dampers on these systems can help.)

But even so, I still urge you to use that vent. That’s because a lot more is coming off of your stovetop than heat and the odors from your stir-fry. Gas stoves, with their open-flame combustion, can create dangerously high levels of nitrogen dioxide, carbon monoxide, formaldehyde, and particulate matter. How high? Recent studies have measured pollutant levels that would violate environmental standards if they were found in outdoor air. These icky fumes can exacerbate or cause respiratory and heart problems, just as if you were inhaling them in smoggy city air, and they’re especially problematic for kids and the elderly.

You’re not home free with an electric stove top, either: Cooking itself, on any type of range, emits particulate matter and an irritating substance called acrolein. It’s not the sort of stuff you want hanging around your kitchen — better to whisk it away with a flick of the vent switch. You’ll use a bit more energy, but it’s a justified use in my book. Of course, you don’t want to go nuts; turn off the hood when you’re done cooking, and use an Energy Star–certified model if you can.

And what if you have one of those ductless recirculating fans, you ask? Don’t despair: Such models usually have a charcoal filter that traps at least some of the nasties your pancake recipe has unleashed. If the weather cooperates, it’s also a great idea to open a window while you’re in chef mode. Or you can grill outdoors, where pollutants can disperse and extra cooking heat won’t be an issue for your AC. And there’s always the raw food diet. I do so love a nice bowl of cold peanut soup, don’t you?