Finnish reindeer now have glowing antlers to protect them from cars 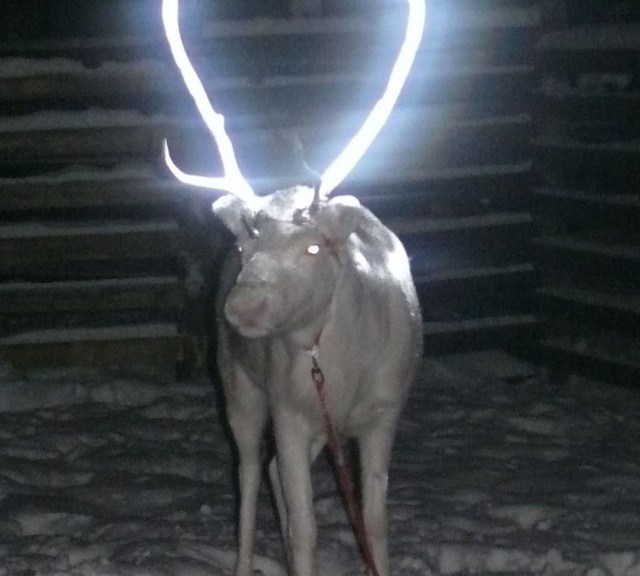 Finnish reindeer now have glowing antlers to protect them from cars

Like deer in the American Northeast, reindeer in Finland are prone to walking onto the road and causing accidents. But, unlike wild American deer, Finnish reindeer actually belong to reindeer herders, who’d like to keep them alive. So the herders are painting their deer’s antlers with a coating that makes them glow in the dark. Bonus: Now ANYONE can guide the sleigh!

The idea of outfitting reindeer with reflective devices has been around in Scandinavia for years. There, reindeer are bred and kept on farms much like cows are in the United States. So the reflectors aren’t just helping keep the reindeer safe, they also help herders keep track of their animals. However, as car accidents involving reindeer have been on the rise, the Finnish herders are taking it to the next level with this new coating idea.

And a Reddit commenter explains why this is necessary at all:

Reindeer are not hunted, but while they roam freely for most of the year, they are owned like cattle. … In addition to danger they pose on the roads as they do not fear vehicles, the herders have an economic incentive to keep the stock alive. If you drive in Lapland, you cannot avoid seeing these animals around roadsides in large flocks. They cause traffic jams just by chilling on the road as well. In the wilderness of Lapland there are few street lights and the nights are tremendously long. I mean polar night.

Reflective coating sounds like a pretty good way of dealing with this — as long as people are alerted of it first. Because if I were driving along in the dark of night, and I saw a bunch of glow-in-the-dark antlers creepily casting light on a herd of reindeer, I might be so freaked out I’d forget to stop.