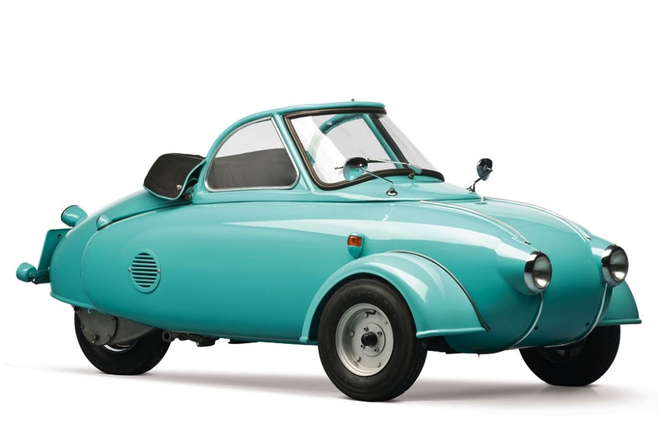 In the 1950s, a German inventor named Carl Jurisch built this car from a motorcycle sidecar. It’s called the Motoplan, seats just one person, and goes, at its top speed, 55 mph. It’s beautiful.

But it was not, as you might have guessed, a particularly popular idea in the ’50s (the era of giant car-boats). This was a prototype, and now it’s a collector’s item — it sold last year at an auction for $103,000.

But there’s something compelling about a car this tiny and cute. Sure, it doesn’t go as fast as cars can, but maybe it goes fast enough. Lloyd Alter, at Treehugger:

If cars were slower, then they wouldn’t need so much protection, air bags and other stuff that makes them heavy. They could comfortably co-exist with bicycles. They would go perfectly with your tiny house.

Plus, it looks like something George Jetson would ride around in — a future past car that only makes sense in the present.