Grab your hats, East Coast -- the worms are back 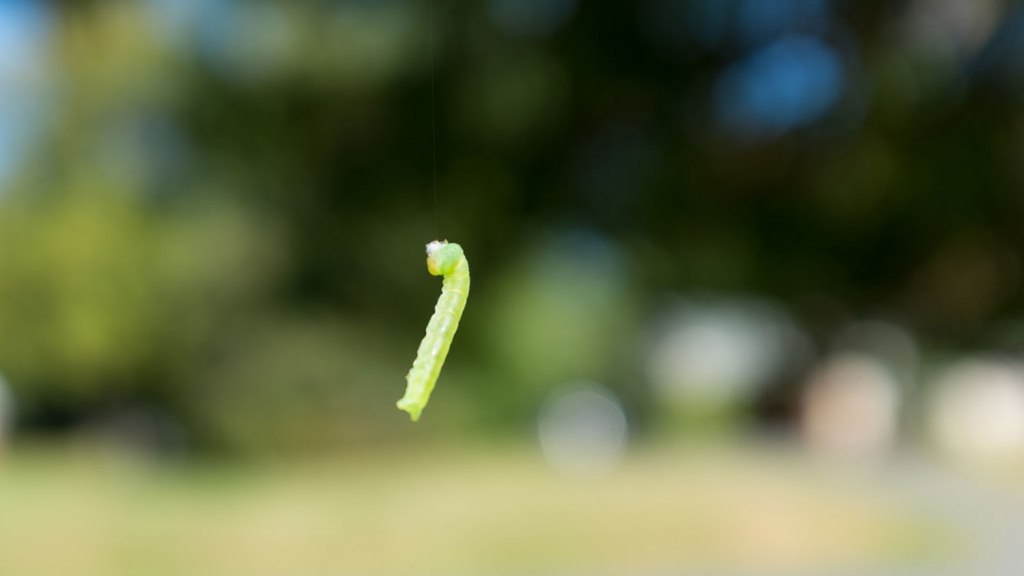 Grab your hats, East Coast — the worms are back

Ahhh, spring! The sky is clear, the sun is out, and after many months of long underwear and wool coats, perfect strangers once again feel compelled to comment on the Donatello tattoo on your bicep (Ninja Turtle, not Renaissance sculptor). If you live on much of the Eastern seaboard, there’s another spring ritual to look forward to: WORM SEASON!

A few years ago, East Coasters started noticing something strange: All of a sudden, there were tiny green inchworms everywhere. Seemingly over night, these worms became as ubiquitous as the bright yellow pollen that coats every house, car, road, and sinus cavity like eraser chalk come April. Millions (maybe billions) of tiny worms with waggling heads and an awful lot of legs were falling from the trees and parachuting onto people’s heads. They covered roofs, porches, picnic tables, garden beds, and shrubs. They hung from your Labrador’s ear and landed in your sweet tea. People waved sticks in front of their faces to break worm silk dangling from tree limbs. It was an invasion. And it’s back.

A quick Google search of “nasty green worms in springtime” reveals these pests are actually called cankerworms. And pests they are. Cankerworms are a type of caterpillar that lays eggs in the fall. Come spring, their eggs hatch into ravenous little offspring that will literally eat every leaf in your neighborhood (and quickly — a swarm can eat the canopy off an oak in just two days). This is obviously not good for trees, but it’s also bad for people: Imagine a July with all the heat and none of the green foliage that makes summer somewhat bearable, or, if not bearable, at least pretty. If cankerworms are left unchecked, we could see a summer with no shade. Shudder.

So how’d these little guys end up taking over the East Coast? They aren’t talking, but we know that the problem is made worse by the lack of biodiversity in urban areas. According to North Carolina State University professor Steve Frank, “Cankerworms did more damage in simple urban environments, where the understory consisted of only a few shrubs, than they did in more complex environments with greater plant diversity.”

And while we don’t know exactly if climate change has anything to do with the booming population of these little monsters, Michael Waldvogel, another professor in NC State’s Entomology Department, told me that insect growth is accelerated in urban heat islands. In other words: Cities, you’re screwed.

Or maybe not. Municipalities with large invasions have tried tree banding, which basically means that you wrap a garbage bag around tree trunks and hope that prevents the worms from crawling into the canopy. This works better than pesticides, Dr. Waldvogel told me, although it also makes your trees look like homeless guy at my bus-stop who wears a Glad bag around his waist. Still, a small price to pay to keep these little green bums from eating all your foliage, right?

Beyond killing trees and hitching rides on your head, these worms have another disturbing habit, which I discovered one night last spring. I was living in Charlotte, N.C., at the time, a city that has been especially hard-hit by cankerworms, and a friend invited me over to her house for a bonfire. “Bring a hat,” she said. That seemed weird, but it made sense when I got there and saw that the fire pit was located directly underneath a stand of willow oaks — the cankerworms’ meal of choice. There was so much worm shit dropping from the trees that it actually sounded like it was raining. After that night, I started taking walks in full riot gear.

Since my last cankerworm spring, I moved from North Carolina to Seattle, and on days in April when I’m still wearing long underwear and I’ve forgotten what it’s like to have dry feet, I think, yes, it may be raining, but at least it’s not raining worm shit. Enjoy spring, East Coast! You may want to spend one of those glorious April afternoons banding your trees.