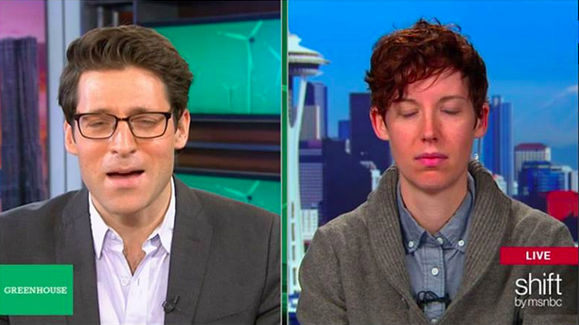 I was recently invited on to the new MSNBC show Greenhouse to talk about a piece I wrote for Grist called “10 New Year’s resolutions for a guilt-free 2015,” which offered impossible, if not downright disturbing, ways to lower your environmental impact. I admit, when I got the request, I was confused — what more was there to say about this list? It was a joke. I don’t really think people should breastfeed until their kids are old enough to get milk out of the fridge themselves. But, hey, I thought, I do like attention, and so I agreed to go on the show. (For the curious, you can watch the clip here.)

MSNBC is based in New York and I’m in Seattle, so the show producer booked a studio here. I wasn’t super prepared for the interview but, I thought, I’ll just wing it. What’s the worst that could happen?

Winging it probably would have been fine but the connection from New York to Seattle was so bad that I couldn’t hear the host. As a master lip reader, I still might have been able to comprehend what he was saying if I had been able to see him, but there was no video feed and so I was basically deaf and blind in front of a camera with eyes cut from a magazine taped to it. It was a strange experience, having a conversation with someone I could neither hear nor see, but I managed to make out every third word or so, and figured if I just nodded a lot it would look like I was paying attention.

After the interview, the producer said it was fine and so I assumed it was and didn’t think much about it. I went to work, did my job, and then caught a train to the airport for a flight to Boulder to see my grandmother, a tough cookie in her late 80s who we all thought was facing imminent death. Hospice was with her, the priest had been called, and my many aunts, uncles, and cousins flew in from all over the country to say goodbye. (Before you send your condolences, know that grandma had a miraculous recovery shortly before I arrived and is now thinking about getting an iPhone. My mom thinks she just needed a good cup of coffee.) While I was waiting for my flight, I watched my Greenhouse segment online.

Most of the segment is fine and except for a short delay, you wouldn’t have any idea that the audio was so fucked up, but there is one part that just, well, it was bad. Real bad.

Item No. 6 on my list of New Years resolutions stated: “Americans use an average of 100 gallons of water per day. Stop this madness by co-showering with friends and loved ones.”

During the interview, I heard the host, Tony Dokoupil, say something about bathing, and, because I remembered the exact text of the resolution, I assumed he said bathing with “friends and loved ones.” Now, it just so happens that I had been to a bathhouse the weekend before with a friend, and so I said, naturally, “That’s one thing that I actually do.” But Tony didn’t say friends. He didn’t even say loved ones. He said family.

That’s right. I said that I bathe with my family on TV. And I realized it while sitting in an airport on my way to see my large extended family, all of whom had seen the show.

I was mortified. Absolutely, completely, 100 percent mortified. But when I finally got to Boulder and told my family the story, the tears of laughter streaming down their faces was worth the humiliation. I might never get invited back to MSNBC, but we were all together, grandma was going to pull through, and there was enough hot water for everyone.