Welcome back to Green Screen, where Grist writers break out their inner film buffs to talk movies, television, video games, and any other heretofore undiscovered screen-based media forms. This week, our star team turn to the newly released Mad Max: Fury Road, from Australian writer and producer George Miller.

The Basics: It’s a symphony of demented action — a single-minded there-and-back-again chase with more kaleidoscopic explosions, deformed tribal villains, and nightmare hoopties of death than you can imagine. Or as comedian, actor, and venerable movie buff Patton Oswalt put it so eloquently:

Why it’s green: Everyone from the Sierra Club to George Miller himself have pointed out that the movie is pretty much set in the climate-ravaged future promised by the IPCC — plus a dash of nuclear wasteland for good measure. The Mad Maxes of the past have always pitched their battles over gasoline, and while it’s a factor here, the maguffin this time around is water — or lack thereof. At one point early on in the movie, the evil King Immortan Joe (Hugh Keays-Byrne), who lords over a plentiful supply of H2O, tells his thirsty and dying subjects: “Do not, my friends, become addicted to water. It will take hold of you, and you will resent its absence.”

Ted: So was it about climate change? I mean, I guess oil is a precious resource, water moreso, and clearly everyone lives under the worst drought ever. But I’m not so sure “climate” is that big of a deal in it. Was I thinking about climate when the opening 45-minute chase culminated with a traffic jam of death getting its shit tossed in an acid trip haboob? Hell, no.

This is a movie that is so single-minded in its pursuit of one goal — basically, braining you constantly with the wildest action scenes you’ve ever seen — that it resists most attempts to tease bigger themes out. Max (Tom Hardy) wears a frightening muzzle chained over his mouth for the first hour, a symbol of his slave status, and like him we’re similarly silenced from making dumb pronouncements on symbolism, i.e. “Wow, those Bullet Farmers really represent climate resilience.” I think this is a strength: The postapocalyptic, ruined-climate backdrop is just that, no extra thinking required, and it’s so much scarier for it when it’s rendered so evocatively. 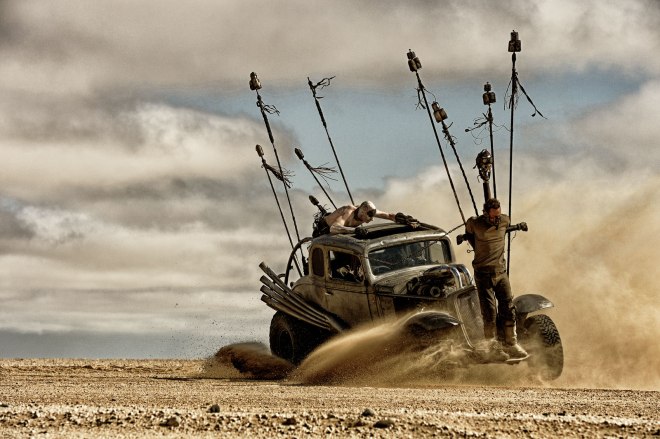 Suzanne: I don’t think this movie is sending any messages, and it doesn’t have to. When the backdrop is an anthropogenic wasteland ruled by a warmonger and his “war boys,” who depend on Gas Town and the Bullet Farm for their two most prized resources, and where women are “breeders,” the earth is too poisonous to farm, and souped-up cars are more important than basic survival, the movie is the message. There’s no subtlety: Humanity fucked up, and now this is life.

Amelia: I agree. It was all so on-the-nose that it’s almost not worth pointing out all the parallels to climate. As you say, they aren’t parallels — they just are. For someone who probably derives too much pleasure pointing out environmental undertones in popular culture, I’m surprisingly OK with that.

Ted: Though speaking of on-the-nose — and mouth, and face, and also in your eyes — there is a scene where Max and a rival hellion, both atop the hoods of racing deathmobiles, each attempt to get out front by spitting gasoline directly into the engine’s air intake. While gripping chrome hood ornaments, they pour glug after glug of sweet petrol into their mouths and then spew it into the war rigs, causing plumes of flame to billow out the exhaust ports. Too much, though, and the car engines will blow. They are literally guzzling gas, attempting to outrace to a grim future by betting that they can swallow just enough toxic fossil fuel to get ahead without killing themselves. I’m not sure there’s a larger point here other than inventive mayhem, but I’m happy to point out a zany spotlight whether Miller intended it or not. 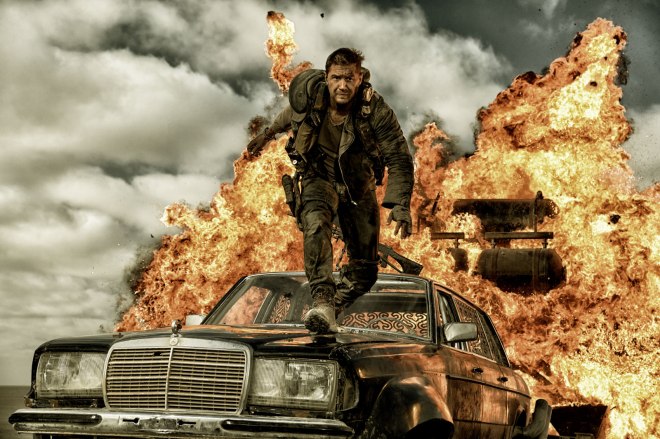 Suzanne: To add to the crazy, King Joe chases Max, Furiosa (Charlize Theron), and the rest of their crew through the desert with, for some reason, a manic, deranged rock star in tow. The dude is standing on his own truck in front of a wall of amps, backed by his own crew of tribal drummers. This character is so unnecessary that viewers will certainly have a what-the-fuck moment when they first see him. But at the same time — why not have an insane rock star jamming out next to you while you chase a “nitro-boosted war machine” through the desert?

Amelia: I definitely care more about the powerhouse driving said nitro-boosted war machine: Furiosa, a buzzcut badass with a prosthetic arm and a killer lack of respect for authority. The environmental backdrop of this movie may be a footnote to the plot, but the triumph of women certainly is not. The plot hinges on the emancipation of the Citadel’s tyrannical overlord’s wives, or “breeders,” who defy the patriarchal bonds of their society to make a radical, ladies-only break for “the Green Place.”

I’ll admit: When I first saw the wives, arrayed across the desert in scanty white gauze like a hazy mirage, I turned to my friend and sighed, “Of course they’re models.” Between Abbey Lee, Riley Keough, Courtney Eaton, Zoë Kravitz, and Rosie Huntington-Whiteley, there is enough collective leg and cheekbone to fill out a Dolce & Gabbana runway. But my initial dismissal of these characters as lissome, helpless eye candy turned out — thankfully — to have been premature.

Over the course of the film, the women toughen up into a guerrilla fighting force in their own right. They are later joined by a gunslinging gang of biker chicks, all over them well into late middle-age and completely fierce. Together, the women fight their way home through a crazed horde of overgrown war boys who are used to seeing women as possessions and assets in a resource-scarce economy. Luckily, the women know they are much more than that. 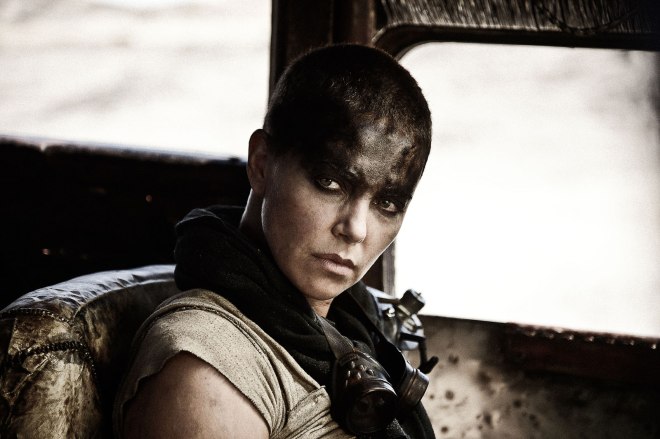 Suzanne: All of this, by the way, has “men’s rights activists” completely up in arms. According to The Guardian, one prominent voice in the “man-o-sphere” has been bitching and moaning about how Fury Road ruined a piece of American culture by turning it into feminist propaganda. That, obviously, just makes this movie so much better.

Amelia: With all these bad bitches around, Max himself is almost an afterthought. He accompanies the women as a kind of helpful chauffeur — taking the wheel when asked and trying not to get shot — but they carry the film. In one telling scene, he aims a gun at a distant car, squeezes off three careful shots that each miss their target. With a wordless exchange between him and Furiosa, he hands over the gun with its final shot, then kneels in front of her. “Don’t breathe,” she says, steadying the gun on his shoulder and sighting along its barrel. He does his job as rifle rest justice, but it’s Furiosa who shoots, and scores.

Ted: That scene was one of my favorites, and the attention to little details — like the whine in Max’s ear we hear after Furiosa squeezes off a kill shot — are as memorable as the wider, brighter splotches of fire and blood Miller uses to paint his violent masterpiece. Those little details act as sharp underlines for some bold and revolutionary-for-Hollywood points (women get old; said old women are usually badasses).

Amelia: Right. In any other movie, these actresses might be pressed into service as lightly sketched grannies and cartoonish spinsters — but here give depth to larger roles as the tough remains of their tribe, mothers who can shoot a man right through the medulla without a second thought. 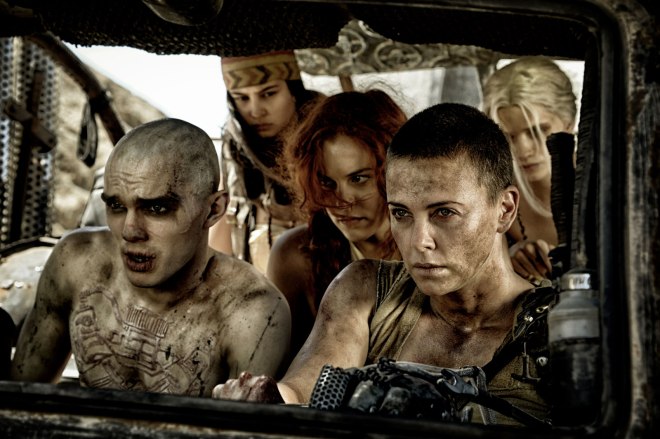 Ted: And if Miller had to populate his movie with porcelain-perfect, damsel-in-distress archetypes (this is still Hollywood, duh), he still gave almost each of them a recognizable character arc and sense of agency. And he did it nearly entirely through kinetic motion bolstered by the occasional terse exchange of dialogue. No obnoxious training scenes where our hero badass shows li’l Missy how to shoot a gun: These are women accustomed to a world where survival requires you know how to sort some bullets. When the wives unclip and drop their fearsome chastity belts into the sand, it was hard not to feel a guttural sense of triumph — this is me uttering a Mad Max-like wordless grunt of approval.

Suzanne: As much as this movie is about awesome chase scenes, crazy gunfights, and bringing down the patriarchy, it’s ultimately a snapshot of a species on the verge of extinction. In Mad Max: Fury Road, humanity has done the irrevocable damage it had long been warned about, and now it’s living out its final days in anarchic, diseased mayhem. Society seems to be left with about five healthy looking women, an army of brainwashed young men who can’t wait to die and enter the gates of Valhalla, a sick and dying general population, and then Max — who is, as the title suggests, mad. It’s hard to believe the species could come back from that. Sadly, Fury Road paints a pretty pathetic and undignified end for us, but on the bright side: All those cars are cobbled together with found pieces and parts, so maybe that means the sharing economy has legs after all.