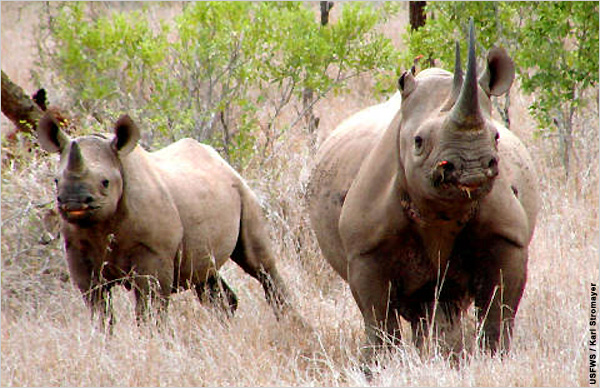 Corey Knowlton is a hunter. He’s been one since he was a kid. It’s not just a hobby, it’s his business; he’s “a consultant for a hunting outfit called Hunting Consortium Ltd and has appeared on several TV hunting shows,” the Dodo writes. And he’s also the guy who won the Dallas Safari Club’s auction of a permit to kill an endangered black rhino in Namibia.

There are only about 5,000 or so of these rhinos left in the world, and Knowlton has spent $350,000 for the permit to kill one of them. The money’s supposed to go towards funding soldiers to protect rhinos from poachers — which sounds ironic, but the organizers said that the rhino hunted would be an old man rhino, one that had lived a full life and wasn’t going to contribute any further to the future of the species.

If you’re going to kill an endangered animal, this isn’t the worst way to do it? (That would probably be to kill a pregnant momma rhino in the prime of her life.) But hunting can be tricky — if you kill an old elephant, for instance, it can mess up the herd’s social structure. The Safari Club says this old man rhino, though, is just an ornery bull and has actually been keeping other male rhinos from mating. That’s Knowlton’s justification, too. These old rhinos, he told CBS, are hunters themselves: “They’re going around looking for other animals to kill,” he said.

Of course, he’s got every reason to make it seems like what he’s doing is exciting, dangerous, and moral all at the same time. It makes a better story — and better TV. And maybe it lets him live with blowing $350,000 on a chance to make a rare animal even rarer.