Excerpted from Satellites in the High Country: Searching for the Wild in the Age of Man, Reproduced by permission of Island Press, Washington, D.C.

We were standing in a circle on a beach of smooth rocks at a bend in the Twisp River. Lynx Vilden was wearing buckskin breeches rolled at the cuffs and a fringed buckskin tunic that showed off her rope-muscled arms. There were curved, inch-long pieces of carved bone in her ears, and a beautifully wrought stone knife in a sheath hanging from her neck. She was barefoot.

“The great thing about learning from the earth is that we can be in communion with everything around us,” Lynx said. “Start looking around, and you probably see a bunch of rocks. But I see a mountain of treasure. Every one is special and beautiful and unique. They are precious for all different reasons. I barely know where to start. All of them, separate beings. There’s fire in some of these rocks — you can smell it.”

When she’s teaching, Lynx’s theater background is apparent. She’s a natural performer, with an actor’s hungry joy when hitting her lines — “a mountain of treasure,” as though she were reciting Robert Louis Stevenson. It was day one of the Basic Skills Course. Our assignment was to gather the materials for a bow drill from what we could find on the river bend.

A bow drill is a tool for making fire — basically, a stick that is spun against a flat piece of wood until the friction creates enough heat to ignite some tinder. The tool consists of a bow into whose string you twist the spindle, aka the drill. The wooden drill spins against another piece of wood, a flat one called the baseboard that sits on the ground. To keep the spindle straight you use a handhold called the socket, usually made from bone or stone. By sawing the bow back and forth you can create enough heat between the spindle and the baseboard to “birth a coal.” 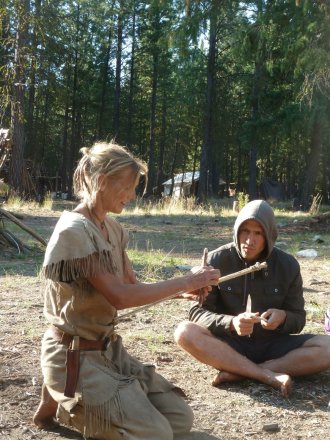 Lynx suggested pliable willow for the bow. A piece of alder would be a serviceable baseboard. Redosier dogwood makes an excellent drill. Before sawing off a demonstration willow whip with her stone knife, Lynx bowed slightly to the plant and said, “Excuse me.” When she had her bow piece in hand, she said “Thank you” to the willow and turned with a nod.

For a socket she suggested one of the thousands of rocks scattered along the riverbank. Soon the 10 of us were spread out on the beach, each bent over a pile of rocks. We spent the next hour or more tapping, pounding, knocking, scraping, and sanding our rocks to hollow out a thumb-sized divot in which to turn our spindles. To the rifle-toting deer hunters drinking beer just downriver, it must have sounded like a Stone Age sweatshop.

During a demonstration, Lynx made fire-starting look effortless. I quickly learned that, for a novice, it was anything except easy. I tried again and again, but couldn’t get it to work. My spindle wouldn’t stay in the socket, and I had to go back and tap out a deeper hole. When I did get the drill to spin, I lost energy before I could get the smoking wood to form a coal. Soon enough the notch in my alder baseboard was deep and polished black, yet I still didn’t have a fire.

My classmates were having an easier time of it. Charles quickly birthed a coal. Then the two Aussies nailed it. Soon after lunch Kat and Shauna both turned coals into fire. But as the afternoon wore on I was still sawing away, and beginning to feel like something of a Paleo failure. 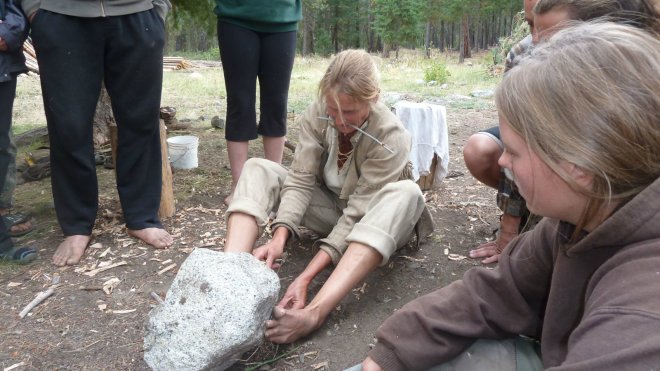 Sometime around my 50th unsuccessful attempt, it hit me: This was one of my wildest adventures ever, and it was by far the most Promethean.

A celebration of human ingenuity, I was coming to understand, is at the center of Lynx’s efforts. She is awed by our ability to reshape the immediate world around us. “Homo sapiens — what does it mean?” she said that day on the beach. “Man the toolmaker. We don’t have claws or teeth, so we had to develop something to have an advantage. And that advantage is tool making.”

Embracing the essential human gift of inventiveness is at the core of the Living Wild experience. It’s not a school for wilderness survival — it’s an attempt at cultural revival, the long-lost culture of living close to the land. And, even more radically, it’s an effort to illustrate that, for most of human existence, wild nature and human culture didn’t feel so separate, for the simple reason that our earliest technologies were birthed straight from the raw earth. By returning to the Paleolithic, Lynx wants to show, we can resolve the Edenic rupture that split humanity from the wild. We can become native with nature once more. 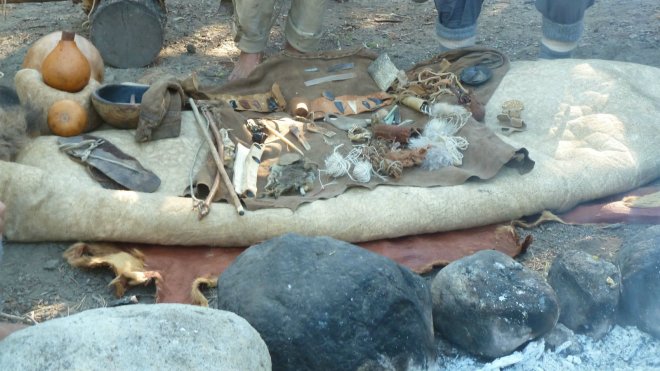 Or, in brief: our fires have gotten away from us. Nearly every technology is a double-edged sword that comes equipped with benefits as well as risks. The most obvious example is, of course, the twisted connection between energy and climate change. Abundant energy is a modern miracle, the very lifeblood of our society. And yet, as we know, when we figured out how to burn coal and dig up oil we ignited what is now a global conflagration. We are, indeed as Lynx said, “man the toolmaker.” But sometimes those tools can backfire.

The wild is supposed to be a refuge from such worries. The legally designated wilderness is an attempt to keep some places free from the dominance of human technologies. It’s an imperfect arrangement: a wilderness boundary can’t keep a wolf in, nor contain a wildfire, nor hold global warming at bay. But wilderness can still keep an engine out. If wilderness remains significant at all, it’s because of the bright line that says, No motor shall pass here. In the wild, if nowhere else, the size of space still matters. By forcing us to negotiate the land by horseback or on foot, the wilderness restores distance and scale. On the trail, a mile is made meaningful once more.

Now, however, this core function of wilderness is at risk from some of our newest inventions. The awesome telecommunications tools of cellphone and satellite easily vault over mountains and rivers. Our information technologies pose a uniquely 21st-century danger to the integrity of the wild as the latest leaps in technology threaten to shrink the mental space provided by wilderness.

Exhibit A: Google is busy making plans for what has been called “universal connectivity.” The information technology giant is expected to spend between $1 billion and $3 billion to deploy a fleet of 180 mini-satellites that will provide an internet signal from the sky. The satellite connection may be augmented by high- altitude balloons and/or solar-powered drones supplying high-speed, broadband service. Someday soon, all of Earth might be a wi-fi hotspot. You’ll be able to check your email and update your status from the farthest reaches of the bush.

Google is also engaged in an ambitious effort to photo-map some of the world’s most remote places, including wilderness areas. In the spring of 2014, the company unveiled “Google Treks,” an extension of its popular Street View program. As part of its “quest to map the Earth,” Google has sent explorers to Australia’s Great Barrier Reef, the Galapagos Islands, and Volcanoes National Park in Hawaii equipped with backpack-mounted, 360-degree, 15-lens arrays to photograph remote scenes. Thanks to Google, you can now raft through the bottom of the Grand Canyon and travel the “road to nowhere” in the Canadian Arctic without leaving the comfort of your laptop.

Perhaps these are modest, well-meaning domestications. Universal connectivity could provide Internet access to billions of people who have never experienced its promise. Photo-mapping the wilderness might provide biologists with important data, or give disabled people the chance to see places they otherwise never could.

But make no mistake: those technological aspirations are domestications nonetheless. It’s a kind of taming by ones and zeroes that threatens to make wilderness obsolete.

Every generation has its own peculiar anxieties about technology. The 20th-century wilderness movement of Aldo Leopold and Howard Zahniser was a reaction to the rise of the automobile. And I’ll bet that when the first telephone was installed in Yosemite Valley, someone called it a sacrilege. Each generation’s complaints about technology eventually seem quaint to its successors, and I’m sure that when every backpacker is wearing some kind of computer embedded on wrist or forehead, my rant here will be a charming anachronism.

Still, the impacts of today’s inventions are different from those of past generations, if only because the velocity of inventiveness has increased. Thanks to Moore’s Law (which says that computational power doubles roughly every two years), future shock is now a chronic condition; the technological baseline shifts every time Apple comes out with a new gadget. To understand how quickly technological change is occurring, consider this: we have just barely started to wrap our mind around the Age of Man, and already some Silicon Valley seers are trumpeting the impending arrival of the “post-human” era. Some futurists predict that we will soon meld the hardware of the human body with digital software to create augmented (or “improved”) humans and, in the process, make a leap forward to a species beyond Homo sapiens. Other futurists imagine something even more grandiose: supposedly, by the middle of this century we will arrive at what has been called “The Singularity” as we begin to upload individual consciousness into computers to achieve a godlike omniscience and immortality.

These techno-utopian fantasies should not be dismissed or underestimated. Some of the smartest minds in America are hard at work making them into reality. To me they reek of insanity. If we ever do achieve the everlasting life of synthetic intelligence, it will mark the final, perhaps irrevocable, departure from our birthplace in nature. At that point, it won’t even matter whether Earth is still habitable for humans—we’ll no longer live here. We’ll be residing somewhere in the mainframe.

If there’s any antidote to the fever dreams of those working for a cyborg future, it seems to me that it resides in the plain old embodiment offered by close contact with the wild. I think you know what I mean: the feeling of wind on skin, of icy ground underfoot, of a hard rain coming down. The visceral experience of wild nature — its implacable physicality — acts like a splash of cold water to the face, bringing us back to our five senses.

In the wilderness, forced to grapple with the uncompromising elements, we are sometimes reminded of original meanings. A web, for example, is something you get stuck in. A net is designed to catch and capture.