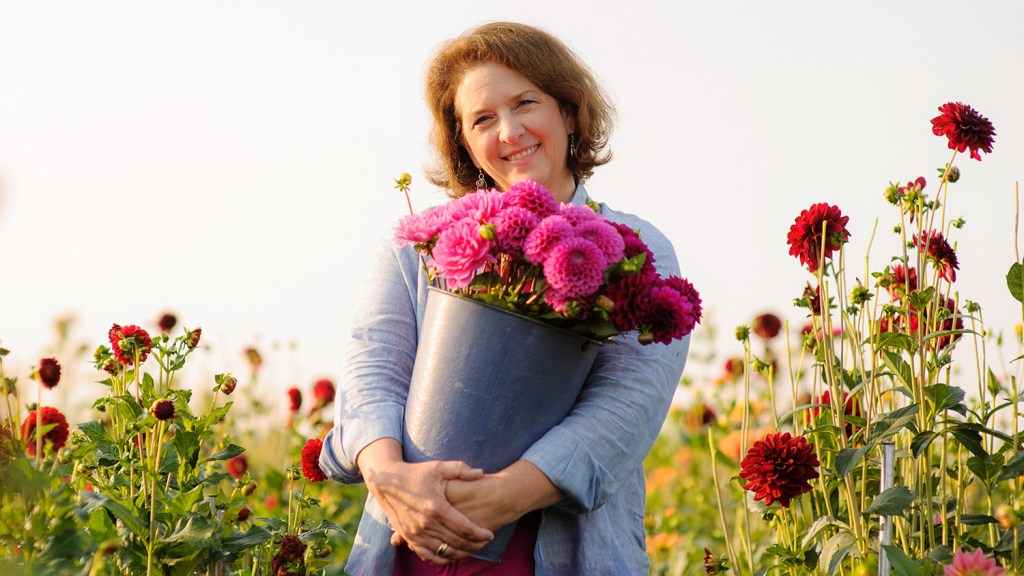 Spring is coming! Which means farmers markets will soon be crankin’ with garlic scapes, leafy greens, and bad acoustic music.

Flower advocate Debra Prinzing is looking forward to the return of local lilies. And for good reason.

Americans typically spend $7-8 billion a year on cut flowers. Chances are, those flowers have racked up more travel miles than George Clooney. According to the California Cut Flower Commission (CCFC), nearly 80 percent of the flowers in the United States are imported, mostly from South America; during peak flower holidays, like Valentine’s season, flowers might arrive on seven daily flights, six days a week to Miami, only to be trucked across the country for retail.

This whopping carbon footprint is a big reason why Prinzing has sparked a “slow flower” movement. The word “slow” is slapped onto a lot of products in our grocery stores, but what the heck does it actually mean? Generally, it refers to foods being grown sustainably. For Prinzing, she would like to extend the definition to mean having been grown locally, too.

“Some people call it the field-to-vase phenomenon. It’s exciting to see that flowers are catching up with where food has gone [in 20 years],” says Prinzing.

Turns out all those imported blooms are significantly cheaper to retailers than domestically grown flowers, thanks to the Andean Trade Preference Agreement. The pact was drawn up in 1991 to help Bolivia, Colombia, Ecuador, and Peru steer away from drug-trafficking and provide other economic alternatives. The South American flower exports boomed as a result, but support for U.S. flower farmers dwindled. By law, florists are not required to label where their flowers are grown, so chrysanthemum-loving consumers remain unaware of their floral footprint. Also, according to Prinzing, the international requirements for flower farming practices are pretty lax and often fraught with workers’ rights issues.

The lack of awareness surrounding these issues has inspired Prinzing to become a triple-threat activist. In 2013, Prinzing published her book Slow Flowers: Four Seasons of Locally Grown Bouquets from the Garden, Meadow and Farm. That same year, she also released “Slow Flowers with Debra Prinzing,” a free podcast in which she tells the stories of American flower farmers and covers all things floristry. In 2014, she launched SlowFlowers.com, an online directory built to connect sustainably minded flower enthusiasts with local florists and farmers.

Prinzing became interested in sustainable flowers after working as a journalist in Seattle for more than a decade. As an avid home gardener herself, she recognized that many of the imported varieties available at the local florist were being grown right in the Puget Sound region of Washington. Like a good journalist (and, er, gardener) she dug into the reasons why. She found out that small flower farmers struggled with gaining visibility and representation in their home states. Now, Prinzing is a member of the CCFC and the Congressional Cut Flower Caucus (yup, another CCFC) and has spoken in Washington, D.C., as a member of both organizations. In the Capitol, she has connected flower farmers with their state representatives and invited the growers to speak on the caucus.

“It became interesting to me that [these farmers] were a forgotten part of agriculture,” she says. “The pendulum has swung so far over to [being] all about food that non-food agriculture had been completely ignored and wasn’t even considered legitimate agriculture.”

The work of Prinzing and the slow flower movement may be blossoming (sorry). The number of small flower farmers grew more than 20 percent across the country from 5,085 in 2007 to 5,903 in 2012. To Prinzing, this is a positive sign that the demand for locally grown flowers is increasing. Also, in 2014, the California CCFC implemented “Certified American Grown” labeling for domestically grown flowers, which retailers can use.

For Prinzing, we have to change the way that we think about buying flowers. In reality, they’re just like tomatoes or beets — they are best when they are in season. And like veggies, choosing seasonal blooms means that you are directly helping your local farmers stay in business.

Now, if you don’t want to support that shrieky folk singer at the farmers market, that’s on you.