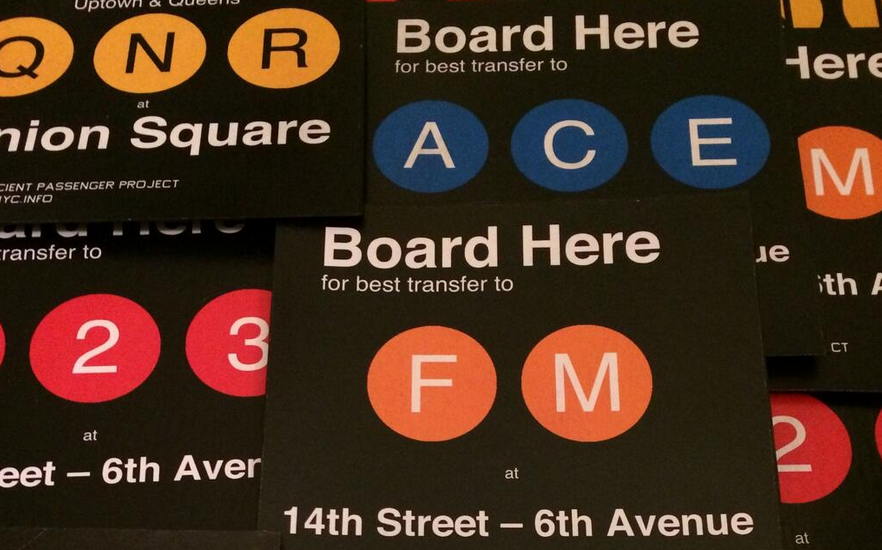 If you are a regular rider of a subway system, there’s no better feeling than getting on the train at exactly the right place so that you can exit directly in front of the stairwell, beat everyone else to the transfer platform, and catch your next train just before it pulls out of the station. You are the master. You are the best.

The Efficient Passenger Project wants to spread that feeling to everyone using the NYC subway system. Gothamist explains:

The Efficient Passenger Project is on a mission to put up signs throughout the subway system guiding commuters to the best spot to board a train in order to make the quickest exit or transfer. The anonymous participants have been placing “Efficient Passenger Project” stickers on and around the turnstiles in select subway stations, signaling the presence of a plaque on the platform that tells you exactly where to stand to make your commute most efficient.

The MTA is less than thrilled about this — if everyone knows which are the best cars to get on, they’re going to get on those cars and crowd them. The system works partly because some people are better at it than others; travelers are rewarded for being frequent users of the system. So the MTA is going to take the signs down. Essentially, they’re the hipster enforcers — they want to limit transfer insight to people who knew about it before it was cool.

Which is too bad, because really, there’s enough variation in the system that most cars are good cars — people transfer to different lines, or they want the car that’s closest to their subway exit. And in New York, it’s pretty good odds that tons of people would miss the signs and just bumble confusedly into whatever car they see first anyway.