Brace yourself: The average American worker needs to earn $19.35 an hour to afford rent for a standard two-bedroom apartment. That’s more than two times the current federal minimum wage. Weeping into your laptop yet? I sure am.

Tanvi Misra from CityLab has the story:

Yes, the American economy is improving, and yes, we’re creating more jobs. But the hourly wages for a lot of these jobs are stagnantat best. According to the Pew Research Center, 30 percent of America’s workforce earns a near-minimum-wage salary—that’s almost 21 million people. As a cruel paradox, rents across the country keep rising.

A new report by the National Low Income Housing Coalition examines how these opposite trends play out regionally. The work maps how much an American worker needs to earn per hour in each state to rent a two-bedroom apartment. It finds that in no state can a person earning minimum wage afford such an apartment at market rent.

In other words, if you’re a single parent trying to make ends meet, good luck with that. Here’s the average hourly wage needed to rent a two-bedroom by state: 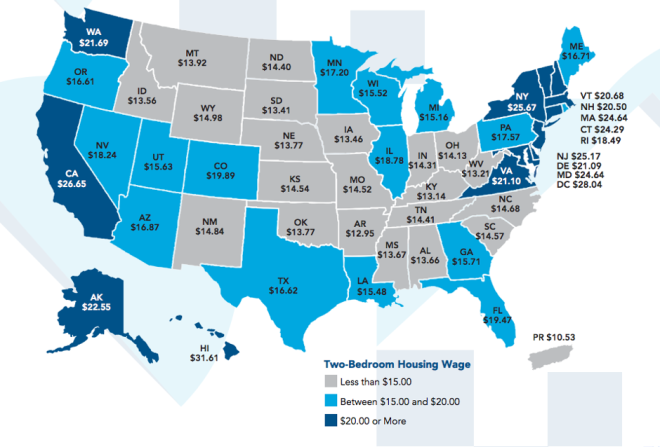 The study also broke down how many hours you’d have to work at a minimum wage rate in order to afford a one-bedroom: 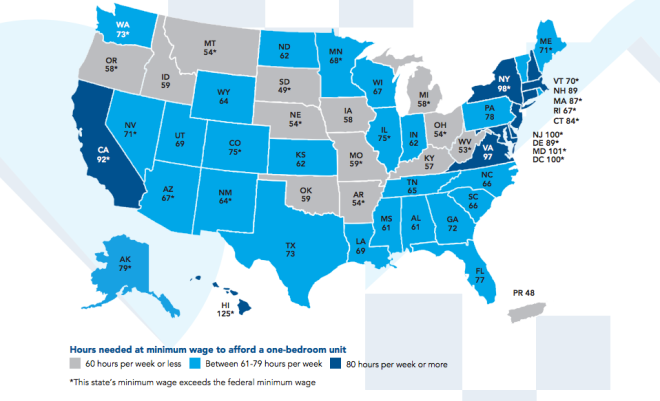 This post was brought to you by Prozac. (I kid, I kid.) But seriously though, anyone want to move to Arkansas with me? I’m going to need some roommates, unless I can rake in almost $13 an hour, that is.