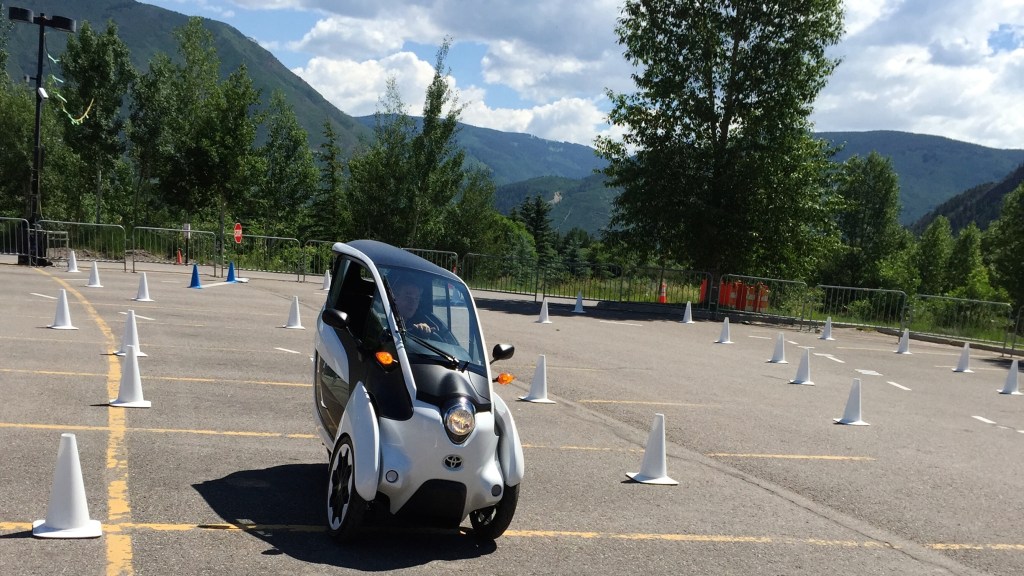 I hate cars for a multitude of reasons, both logical (I’m afraid of getting hit by one) and illogical (cars are just so boring).

But it’s a complicated way to be, hating things. Whenever I decide to just go ahead and full-on loathe, I find myself making exceptions. For example, I am actually pretty excited to be getting into a car right now. My excuse: It’s electric, and it looks like a jellybean on three wheels. Toyota has set up a little practice track in a high school parking lot not far from the Aspen Ideas Festival, where attendees have been disappearing for test drives. For the last few days I’ve been overhearing a lot of excited chatter about the test drives, in between all the fraught panel discussions about “What is America?” (Short answer: complicated) and “Is America a jerk?” (Short answer: probably).

The car is called the iRoad, because Toyota has been putting a lowercase “i” in front of its weirder projects for a while now, and Apple never did win those trademark infringement lawsuits. The iRoad is being billed as marrying the safety and ease of a car with the fun of a motorcycle. I am not sure about the safety part — to the eyes of someone who grew up in SUV country, the iRoad looks alarmingly small, like the clown car of the future.

But once I climb inside the clown car, the feeling changes. It has one very narrow seat in the front, which resembles the pilot seat of a Star Wars X-wing. “The steering is in the back,” says the driving instructor, Steve. “So it’s going to handle counter-intuitively. It’s a good idea to turn earlier than you usually would. There’s a gyroscope inside that will keep you from tipping over. See if you can get around the track and not knock down any of these cones.”

What I want to say is, suavely, “It’s not impossible. I used to bullseye womp rats in my T-16 back home.” But since I drive so infrequently, it takes a while for the muscle memory of the whole process to return. I stare down at my feet. Which pedal is the brake? Which pedal is the accelerator? I push my foot down on each, very slowly, while trying to look supremely confident, and like a person who under no circumstances should be forbidden to drive the prototype car.

Steve looks worried. I think Steve is on to me.

But it is too late, Steve, because I now know which pedal is the accelerator. I take off with a jolt, and round the first corner, sharply. The entire car tilts to one side with the force of the turn, in a way that feels eerily non-vehicular. (I later hear that the main engineer on the project, Yanaka Akihiro, is an ardent skier, and is obsessed with the idea of mechanically replicating the experience of skiing.) Cones topple all around me.

Steve wasn’t kidding about the turns, but each lap around the track feels like I’m getting more of the hang of it, though I’m still taking out the occasional cone. My time is up long before I’m ready to stop driving. I reluctantly step out, wondering, how would this work in the real world? Why don’t we have something like this already?

Well, we have. Many times. When I first saw the iRoad, it looked familiar, though it took a while to realize why. It’s a pint-sized ringer for the Dymaxion Car, the three-wheeled car designed by Buckminister Fuller (with design input from Norman Bel Geddes and Isamo Noguchi). The car was the toast of the 1933 Century of Progress Exposition in Chicago.

The Dymaxion car was much larger than the iRoad. The ideals were futuristic, but in practice it was, like many of Fuller’s later projects, heavily influenced by boat design — Fuller was an avid sailor. Even then, in a time that I (perhaps naively) imagine being rich with parking spaces, since there were so few cars in the U.S. relative to today, its parallel parking skills attracted attention.

Fuller had grand ambitions, which involved altering future models so that they could fly as well as drive. Then, one of the three demo models was involved in a car crash, and its driver was killed. Would-be investors evaporated. Only three cars were ever completed.

Buckminister Fuller insisted that the Dymaxion car had been cleared of fault for the accident, which was true — as the story goes, the crash was caused by an automobile driver who was trying to get close enough to the Dymaxion car to get a better look. But earlier this summer, Dan Neil, a writer for the Wall Street Journal, got a rare chance to take a replica of the original Dymaxion car out for a spin.

The headline — “A test drive of the death trap car designed by Buckminister Fuller” — gives you a good sense of Neil’s conclusion. The three wheels made it more likely to tip over than a regular, four-wheeled car, and the single back wheel began to oscillate dangerously from side to side when the speed got above 50 (which explains why the iRoad doesn’t go faster than 35 mph).

So far, there are only a few hundred iRoads out in the world, and none of them are for sale. A hundred of them are part of a test group in Tokyo, whose drivers are using them as personal cars. Another 70 are part of a car-sharing program in Grenoble, France. It’s been in the works for nearly a decade now; a predecessor, a three-wheeled wheelchair called the iReal, never made it past the concept stage.

What would be a good American location to introduce this vehicle? I am prejudiced, since I live there, but a place like San Francisco — with its moody weather, bad parking, not-so-great transit, and obsession with things that are shiny and new — would seem like a good fit. People in San Francisco will drive almost anything. Before the great pocket bike crackdowns of the early 2000s, the sight of huge men perched on tiny, insanely loud motorcycles was a regular part of the fabric of street life in the Mission. And San Francisco City Hall has four charging stations, which could be an ideal setup for a demo electric car fleet.

But there are issues with the California DMV. By California DMV rules, the iRoad’s weight (light) and number of wheels (less than four) means that it’s in the same class as a motorcycle — so drivers would have to wear helmets. The DMV has been “very accommodating,” according to Jason Schultz, who has been working on iRoad focus groups for Toyota —  but not so accommodating enough yet to waive the helmet law for the iRoad.

This debate over the future of the iRoad — what is it? how best to use it?  — is symptomatic of larger questions about the future of the urban car. Ten or 20 years from now, will there be enough of a market of solo people looking for a permanent, full-time car that they can squeeze into awkward parking spaces? Or will most city cars — no matter what size — be owned by carshare companies?

The carshare market makes some sense for the iRoad because, as Jana Hartline, environmental communication manager at Toyota Motor Sales, describes it, “Americans buy for the ‘what if.’” Someone who drives alone 95 percent of the time will still buy a car that seats two to four people, just in case. A carshare user could check out an iRoad for solo errands, the same way that a person listening to music alone will put on headphones instead of breaking out the boombox.

But would a carshare program go for an eccentric, three-wheeled car that requires at least 15 minutes of training for everyone who drives it, when it could go for something simple like the COMS, its four-wheeled equivalent? (Forbes described the COMS, brutally, as Toyota’s “attempt to capitalize on the diminished expectations of global slackerdom.”) And would drivers of more conventional vehicles share the road with iRoads?

Right now, there are no firm plans to put the iRoad into production, in the U.S. or anywhere. There’s no theoretical price — not even a potential price range. The iRoad is light years more advanced than the Dymaxion car, technology-wise, but it might wind up being an expensive toy (like many other three-wheeled vehicles). It could be perpetually-on-the-verge-of-happening vaporware, like Elio Motors, which claims to have 38,000 orders for its own three-wheeled car, but has struggled for years to actually get the funding to put it into production. (Elio has also struggled with the helmet issue.)

Or the iRoad could just live out its life as a flashy demo, bringing good PR to Toyota, a company which may believe in harmonious transit, but which also recently moved its U.S. headquarters to the suburban sprawl of Plano, Texas — which is one way to make sure that your employees have a lot more firsthand experience with driving than with public transit.

A vehicle like the iRoad won’t get far in a place like Plano. Its 35 mph limit means it can’t get on the highway. It holds about as much charge as a golf cart –- about 30 miles’ worth. And, quite frankly, when you get down to it, the iRoad is a golf cart — it’s just an awesome one. In the same way that Telsla’s big electric car breakthrough was in making the electric car a status symbol, instead of just something noble, the sexying-up of the golf cart is a plausible future for the metropolitan car.

That is, if you are car people. I may have loved driving the iRoad more than I ever expected, but if I want to haul things around the city, be protected from bad weather, and use renewable energy, I’ve already got my technology picked out. I’ve seen cyclists use these capacious rain ponchos in places like Shanghai. They’re kind of like a pup tent you wear on your body — and when this drought ends, believe me, I’m getting one.

It would be great to live in a future where the iRoad would be puttering through traffic. But as for actually buying one? I’m just not the target market. Call me when you put that gyroscope on a bicycle! Then we’ll talk.