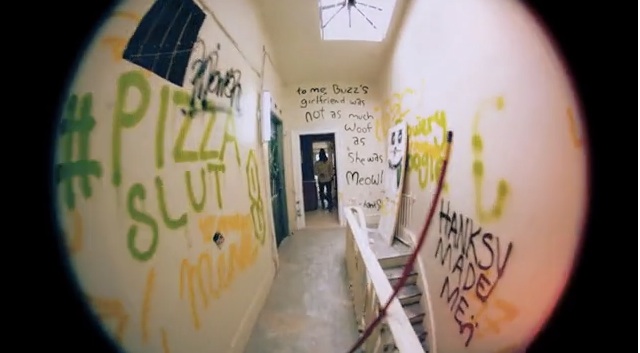 The street artist Hanksy knew you’d be into this project. The New York Times:

After getting keys to a newly abandoned rowhouse on East Fourth Street, he invited several dozen street artists and graffiti writers to paint the vacant apartments. The collaboration, which he called Surplus Candy, was illegal and somewhat secret — exactly the combination that would produce page views. …

“You throw in a couple of keywords — East Village, illegal, street art — people will run with that,” he said.

But, hey, what can we say? We think illegal street art projects in the East Village are cool. At least, this one certainly is:

Note how they borrowed a trick from real estate brokers — using fish eye lens to make an East Village apartment look bigger than it is.

The artists who contributed are:

And they thought it was pretty cool, too. NYT:

The street artist Gilf! was the first to start painting, and she said it was a rare chance to work undisturbed, without having to rush before the police arrived. …

Cosbe, a graffiti writer who created a politically charged work called “Slumlord,” likened the project to the art scene of the ’70s and ’80s, when graffiti writers flocked to the East Village because so many buildings were abandoned. Only now, the surrounding buildings were seven-figure co-ops or condos, he said.

So, it’s a mad, mad world in which graffiti artists have enough PR savvy to get a fancy NYT story, but there’s still plenty to protest with street art in a neighborhood known for its artistic rebellion. You can try to wrap your head around that, or you can just enjoy your brief view into this necessarily temporary gallery.