What's the greenest way to get rid of hornets and yellow jackets? 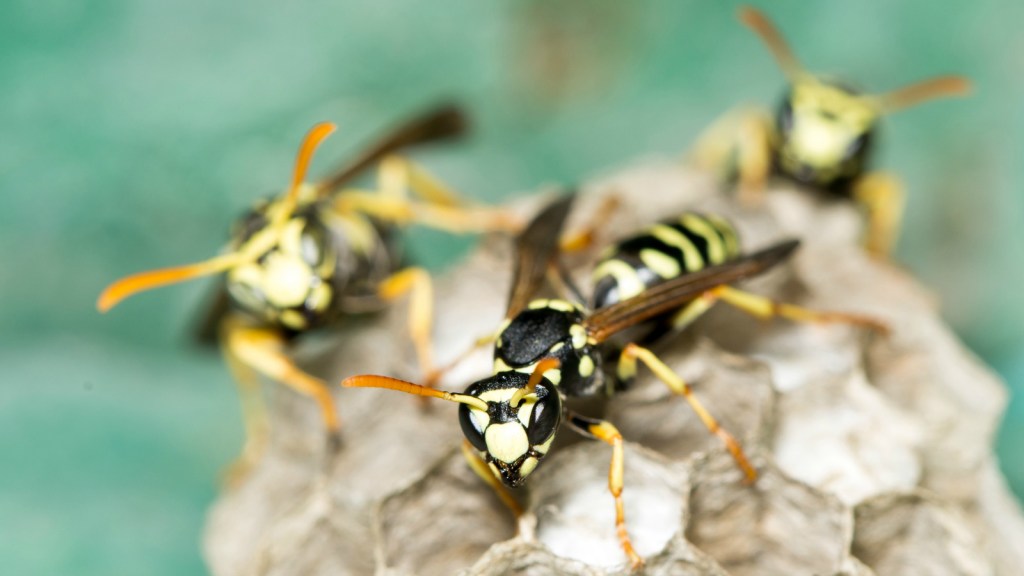 What’s the greenest way to get rid of hornets and yellow jackets?

What’s the most environmentally responsible way to deal with hornets and yellow jackets nesting near people? Sprays seem pretty toxic to everything (not just the stingers) and I wouldn’t want to make things even harder for honeybees and other pollinators. We’ve had several stinging episodes (a hornet sting is extremely painful), and they can be pretty aggressive even when they don’t sting.

If a group of butterflies is called a flutter and a group of ants is an army, what’s a group of hornets called? A grist! I confess, this means I have a warm spot in my heart for these stripy insects, even if they do pack a mean punch on the stinger end. But I’d appreciate hornets and yellow jackets even without their group name — they bring a lot to the table by hunting and devouring critter pests such as flies, caterpillars, and other bugs. That, and they certainly deserve a place on the “Nature’s Biggest Badasses” list. You can’t help but admire that just a bit.

But then again, hornets and their cousins, yellow jackets, can be a giant pain in the butt — or arm, or leg, or anywhere else they happen to stick you. If you or anyone in your family is allergic to stings, this quickly moves from nuisance to life-or-death territory. And ‘tis the season for these winged stingers to become a problem: In late summer and fall, they tend to become more aggressive as booming hive populations drive them out in search of food. (Fun fact: Every year, a hornet’s nest starts with a single queen. But by late summer, she’ll have spawned thousands of new insects.)

Because these insects are an important part of the ecosystem, and because they can be quite dangerous when threatened, the best course of action, if possible, is to just let hornets and yellow jackets do their thing without interference. If you can reasonably avoid them for a season, the problem will resolve itself: Come the first freeze, hornets will abandon their nests and find a new place to start fresh next year.

But it sounds like your household has not been quite so lucky, Stephens, having suffered stings more than once. Tiptoeing around a nest of ornery insects is no way to live. So let’s move on to what you can do about your unfriendliest neighbors. First off, you’re right about conventional bug-killers-in-a-can being no picnic for the rest of the ecosystem. Most of the insecticides for consumer use (permethrin, tetramethrin, and prallethrin are among the most common) are also highly toxic to amphibians, fish, other aquatic creatures, and, yes, bees. The good news is that using them on one hive is unlikely to cause a massive environmental disaster: Because you apply the insecticides directly to the hive, then wait a day or two and remove the whole thing, they probably won’t spread far. All three of these chemicals also break down when exposed to sunlight or soil microbes.

I’ll begin with my favorite: Call in the professionals to carefully slip a bag over the hive, gangland-style, seal it, and whisk the whole shebang away without a single whiff of chemical warfare. For obvious reasons, I don’t recommend trying this yourself. Pro exterminators know how to do it safely, and they have full wasp suits to boot.

However, this only works if the nest is somewhere accessible, like hanging in a tree or tucked in a bush. Hornets and yellow jackets are also known to build hives in abandoned underground burrows, tree hollows, attics, and in between walls, spots that are much harder to reach. In this case, I also recommend summoning the pros. But be choosy about it and look for someone who’ll attack using less-toxic methods, such as the botanical-based insecticide spray EcoSmart.

And if you absolutely must do it yourself (ouch), Stephens, be careful. You can buy the botanical insecticide sprays for personal use, too. I’ve also heard anecdotally that you can kill paper wasps — not hornets or yellow jackets — with a homemade dish soap spray. Which brings me to another important point: If you’re going to try to tackle this problem on your own, make sure you know if you’re dealing with European hornets, baldfaced hornets, yellow jackets, paper wasps, or something else entirely. They all have their own quirks, and you’ll need to know their strengths and weaknesses to be effective in battle. Good luck, and I hope the rest of your summer proves stingless.