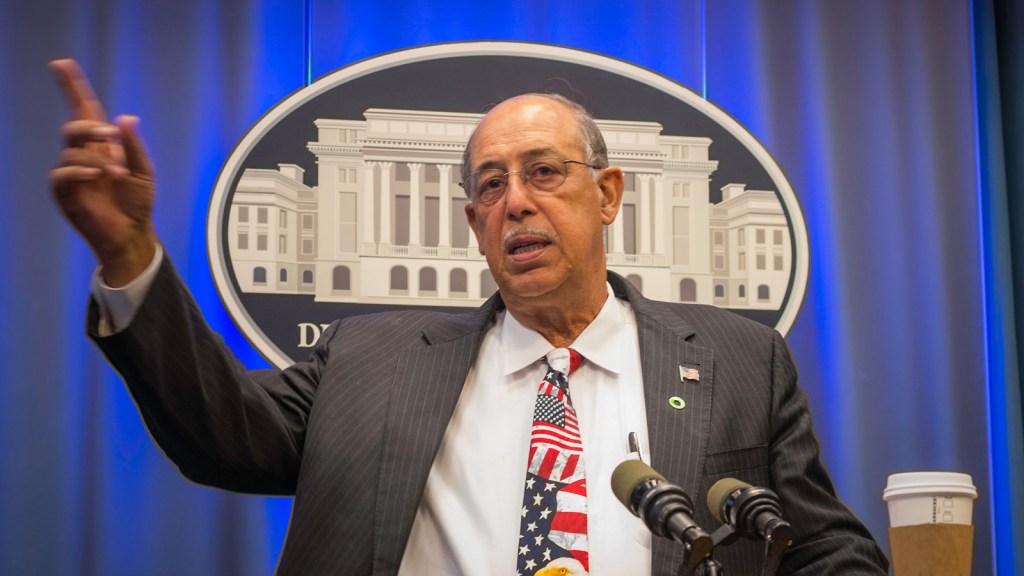 Lt. Gen. Russel L. Honoré first noticed something was deeply wrong in his home state of Louisiana in September 2005, a few weeks after Hurricane Katrina slammed the Gulf Coast. Honoré, commander of the military’s disaster response operation, was choppering back to his floating headquarters aboard the USS Bataan when he saw a ribbon of rainbow on the water beneath him. “What in the heck is that?” he recalls asking the pilot. “He said, ‘Those are old oil wells, general — you see the derricks knocked down.'” Honoré was staring down at one of the storm’s little-noticed consequences — millions of gallons of oil spilled into the state’s fragile coastal wetlands. “And my heart almost stopped.”

As he recounts the story one Saturday morning outside a coffee shop near his home in Baton Rouge, Honoré’s eyes widen incredulously. “Come to find out later, many of those oil wells were actually abandoned,” he explains. “And even today — listen to me — the derricks are still on the ground. They’ve never been picked up.”

In the past couple of years, the 67-year-old Army lifer has undergone an almost religious awakening, throwing himself into one of the largest environmental combat zones in the United States. Louisiana has given oil and gas companies carte blanche to carve up its southern coast. Things aren’t much better on dry land, where some of the state’s poorest residents live in the shadow of some of the country’s largest polluters. In response, Honoré has formed the Green Army, an organization that’s advocated for some of the state’s most threatened communities while clashing with the petrochemical lobby and its champion in Baton Rouge, Republican Gov. Bobby Jindal. Now he might be aiming for something even bigger — the governor’s mansion.

The general was born during a hurricane in 1947, on his family’s subsistence farm in Pointe Coupee Parish. Honoré, who is African American and identifies as Creole, attended colored schools, paid his way through college, and enlisted in the Army in 1971 over his parents’ protests. By 2004, he’d become a three-star general in charge of the First Army and responsible for the deployment of National Guard divisions heading to Iraq. When Katrina hit, his Louisiana roots and local patois made him a natural pick to head Joint Task Force Katrina. Amid the flailing of FEMA and local authorities, Honoré earned respect as a hard-ass — “a black John Wayne dude,” as then-New Orleans Mayor Ray Nagin put it. He eased the fears of New Orleans’ black residents by ordering his soldiers to “put those damn weapons down” and ended his television interviews by shouting, “Over!” Honoré, a Times-Picayune reporter wrote, was a “salty-mouthed, cigar-chompin’ guardian angel in camouflage.”

After he hung up his fatigues in 2008, Honoré had expected to spend his retirement writing books and giving speeches about disaster preparedness, a subject he has obsessed over since Katrina. Then, in 2013, he got a call from an acquaintance in Bayou Corne, where an underground salt mine had collapsed a year earlier, creating a 30-acre sinkhole that forced 300 people from their homes. Honoré began showing up at the residents’ weekly support group, coaching them on how to take their case to the public. “If this had happened in Boston, the world would have stopped,” he says. “But the fact is that it’s happening in a Southern bayou, in a place that people in the rest of America are just willing to write off.” With Honoré’s signal boost, the sinkhole became a nationally known eyesore, and state legislators pushed through new regulations on salt caverns. The residents have since settled with the company that had mined the cavern for $48.1 million.

After that, other communities worried about pollution in their backyards started pleading with Honoré for help. Before crisscrossing Louisiana to assist them, “I had no idea what was going on,” Honoré says. Since then, he’s had an awakening: “Our state’s been raped.”

In late 2013, Honoré teamed up with environmental groups, including the Sierra Club and the Louisiana Environmental Action Network, to form the Green Army, an umbrella group that seeks to act as a force multiplier for activists. The martial rhetoric is pervasive: Volunteers “enlist,” Honoré refers to local chapters as “battalions,” and he describes his research as “military assessments.”

The group has had some quick victories. It got clean water for Mossville, an African American community whose supply had been contaminated for years. Under pressure from Green Army demonstrators, Jindal signed a law requiring oil and gas companies to pay more when they buy out homes that have become unlivable due to pollution. The Green Army has big plans for Baton Rouge’s 2015 legislative session, including a bill that would require property owners to inform their neighbors when they inject industrial waste underground.

The general may win hearts and minds in the bayous, but he has yet to be greeted as a liberator in the state capital. In June 2013, a regional flood protection authority in southeastern Louisiana filed a lawsuit against nearly 100 oil and gas companies for damages due to coastal erosion. (Louisiana loses 24 football fields worth of land daily, in part because of the network of pipelines and canals carved across its wetlands.) In Baton Rouge, oil industry lawyers helped write a bill that retroactively quashed the suit and prohibited local authorities from filing similar cases. Jindal signed the bill last June.

“Can you believe that?” Honoré says. “Gonna reach back in time! What law are they gonna change next? Are they gonna tell me I have to go in the back door of buildings again, and use a separate water fountain?” In November, a state judge found the law unconstitutional; the Jindal administration is expected to appeal.

Honoré is critical of Jindal and the Republican most likely to replace him, Sen. David Vitter, also a staunch friend of the petrochemical lobby. Asked if he’d consider challenging Vitter in the 2015 gubernatorial election, Honoré, a pro-choice, pro-gun, African American veteran, answers, “Oh yeah, I think about it — I think about it a lot.” (Louisiana has a nonpartisan “jungle primary” system; candidates who win 50 percent or more of the vote win their election outright.) The biggest obstacle, he acknowledges, would be the discipline of the campaign trail. “They want you to not even slip, understand?” he says. For instance, he’s got no problem with guns but doesn’t think they should be political props. “You have to take a picture with the guns and all that,” he explains. “The politics here is you’ve got to not just own a gun, you’ve got to say it. This legislature almost passed a law so that you could bring guns into the legislature. I mean, how stupid would that have been?”

Despite his impeccable credentials, Honoré would clearly have an uphill battle. If a “good governor” were in charge, he freely states, “everybody’s gonna suffer.” For instance, he’d hike tuition at state colleges, where state residents currently get a scholarship equivalent to the cost of tuition, and divert funds from higher education to schools in poor areas. “The way you keep the middle class in line is you let their kids go to college for free,” he says. “So kids show up at LSU with a brand new BMW and don’t pay to go to college. What a concept!”

Even if he could sell his tough-love vision, he’d still have to outmaneuver the state’s biggest political force, the oil, gas, and chemical companies. “Katrina was about logistics,” he reflects. “I just had to get helicopters, buses, and ships and hospitals to take care of people.” Elections are an entirely different kind of operation.