A pipeline leak discovered Thursday morning spilled as many as 700 barrels, or nearly 30,000 gallons, of crude oil in California’s Prince Barranca valley.

Emergency crews scrambled to halt the oil’s progress before it reached the Pacific Ocean and, fortunately, it looks like they were successful. According to Ventura County firefighter Marisol Rodriguez, the workers are now in “cleanup mode.”

“The pump has been shut down.” Rodriguez told the Los Angeles Times. “There’s no way it can get to the ocean.” 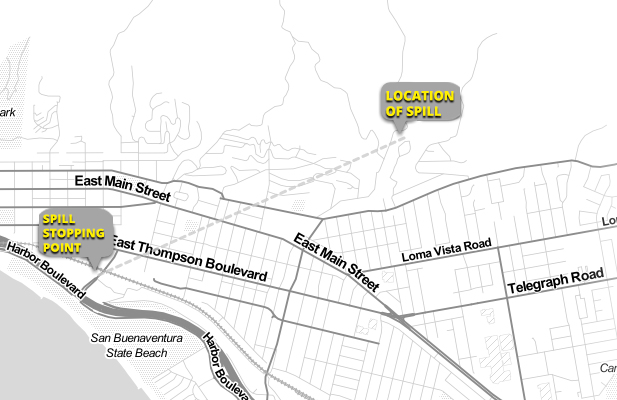 Next time there’s a larger spill, we might not be so lucky.

Last year, more than 100,000 gallons of crude oil spilled onto Santa Barbara’s Refugio State Beach, closing the beach for two months and fouling the area with thick black crude. Tarballs from that spill appeared as far as 100 miles south.

The oil company responsible, Plains All American Pipeline, was indicted on 46 criminal counts and charged with $3 million in fines. The company expected the total price tag for cleanup to be far greater than the fine, at $257 million.

Crimson, which owns the ruptured pipeline from the recent spill, controls over 1,000 miles of pipeline in the state.