You’ve got to hand it to him for creativity.

Rep. Richard Hudson (R-N.C.) has proposed an amendment that would ban employees of the Environmental Protection Agency (EPA) from using taxpayer money to fly … because environmental regulators in coach is really the battle we need to be fighting right now. You can think of it as a sort of no-fly list for greens, as Politico reports.

Not content merely to force EPA employees to ride Greyhound, Rep. Hudson also proposed an amendment that would prohibit EPA funds from being used to buy firearms. While it’s hardly common for water quality inspectors to pack heat, a small number of EPA officers do carry weapons for enforcement purposes. In 2009, for instance, armed EPA agents helped apprehend fugitive Larkin Baggett, the owner of a Utah chemical company who had been sentenced to 20 years in prison for illegal dumping and other environmental crimes.

As for pretty much anyone else carrying AR-15s, well, Hudson sees no problem there.

Here’s the text of the amendment: 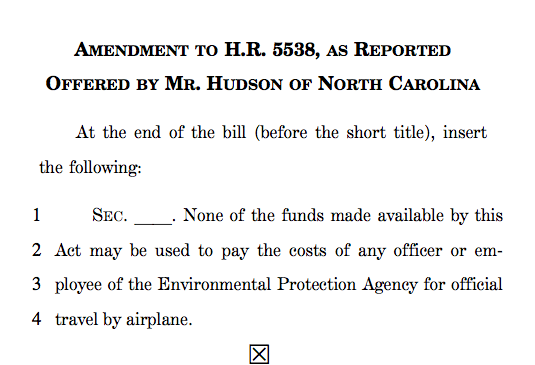