Earthquake risk is on the rise, and we mostly have ourselves to blame — or, more specifically, the oil and gas industry.

In a new report, the U.S. Geological Survey maps out earthquake hazards for the coming year, and for the first time, its assessment includes the risk of human-induced earthquakes. There’s now so much earthquake activity caused by the oil industry injecting wastewater underground that 7 million Americans in the central and eastern U.S. are at risk of experiencing a damaging tremor this year.

In parts of north-central Oklahoma and southern Kansas, the risk of dangerous shaking is now about 5–12 percent per year — a riskiness on par with traditionally earthquake-prone California. The difference, of course, is that the Californian quakes as we currently understand them mostly stem from natural processes.

Fracking itself is not to blame for the increased earthquake risk, USGS says. Rather, it’s the oil and gas industry’s disposal of wastewater that can cause problems. Sometimes that wastewater is the result of fracking, and sometimes it’s the result of traditional drilling processes. After water is pumped into the earth to help extract oil and gas, it comes back up polluted, salty, and altogether undrinkable. To keep it away from people and other critters, it’s often injected back into the earth into deeper formations (below the aquifers we tap for drinking water). This kind of injection can lead to increased pressure at fault zones, which can cause the kind of slippage associated with earthquakes.

The following map shows the new distribution of risk for damaging earthquakes across the United States. Note that the portion on the right — the area updated in the USGS report — includes both natural and human-induced earthquakes, while the portion on the left includes only natural quakes (due to methodological differences). 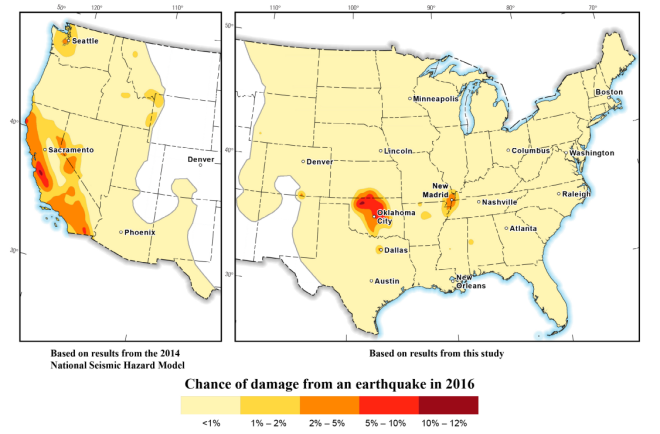 Assessing the risk of human-induced earthquakes is tricky because these quakes can potentially be influenced by policy decisions. For example, in Oklahoma — which has already experienced several large quakes this year, including a 5.1-magnitude event in February — regulators are taking steps to curb wastewater injection. It’s the kind of directive that could lead to a lower risk assessment in the future.

Half of U.S. oil is now fracked — but it might not stay that way