A Canadian advocate for oil sands recently learned just how fickle the internet can be.

In Canada lesbians are considered hot! In Saudi Arabia if you’re a lesbian you die! Why are we getting our oil from countries that don’t think lesbians are hot?! Choose equality! Choose Canadian oil! 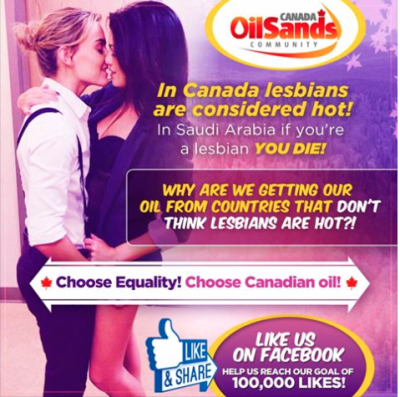 The backlash was swift. People from within the group and beyond did not hold back their anger, although the source of that anger varied. Some objected to the treatment of women as sex objects, others to lesbianism itself, and still others to the idea that Canadian tar sands oil is any better for the planet than importing oil from Saudi Arabia. (For the record, they’re both bad.)

Then, naturally, the backlash to the backlash started: “People who legitimately complained about it being offensive should be banned from Universities,” Charles Garand weighed in on the Facebook page. “I urge you to reupload the picture back to your page because I really do love it.”

The point of the meme, according to Picard, was to raise awareness about how imports from Saudi Arabia are hurting the local economy. This is not the first time Picard, who lost his home in the recent wildfires in Fort McMurray, has said something controversial about oil exaction.

In 2015, he claimed that “[t]he oil sands are the best thing that ever happened for aboriginal people.” The aboriginal people of Alberta, however, may disagree. In fact, Canada’s First Nations people have been on the front lines of working against tar sands oil extraction for years. But Picard certainly has a creative way of thinking.

“When I say lesbians are hot, I don’t think there is anything wrong about saying that,” he told the National Post. “I think all lesbians are hot and I’m not opposed to putting a picture of two guys up there. It was just to strike up a conversation. I find anybody is hot. I think two women kissing is hot. I think that something that is part of the fabric of our city — that we can do whatever we want in our country — that is hot.”

It certainly is, Mr. Picard.