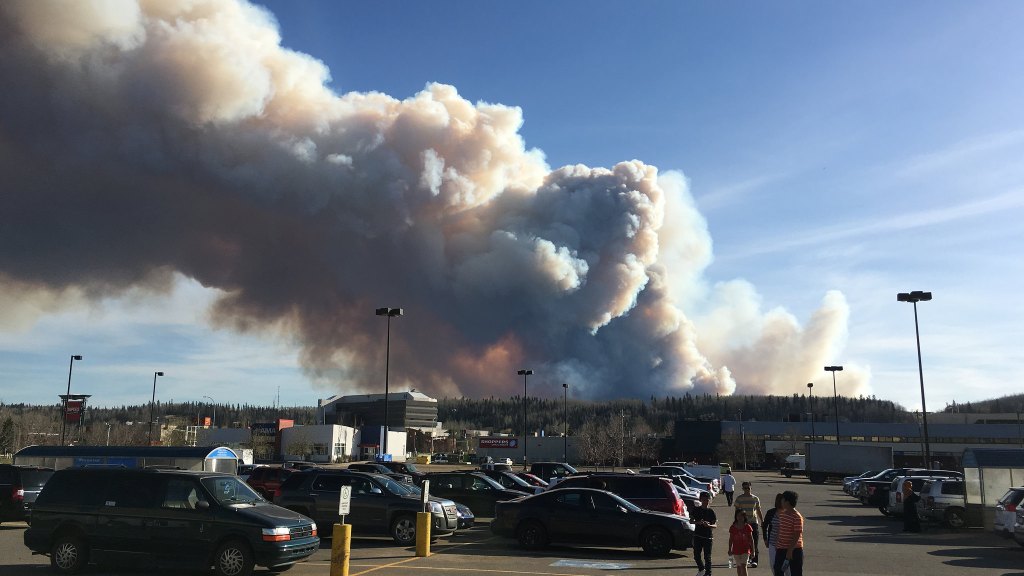 A massive wildfire is destroying everything in its path in a remote town located in the region of Canada that holds the third-largest oil reserves in the world. Nearly 90,000 residents of Fort McMurray have fled the flames, which have already consumed entire neighborhoods.

As 19-year-old resident Cassie White fled, she saw the gas station explode. “It almost looks like a zombie apocalypse,” she told The Globe and Mail. “At the time, I didn’t know if I was going to make it out … I felt like I was in a vacuum bag and all the air was being sucked out.”

While homes burn, the fire has left the nearby Athabasca oil sands unscathed. That could change; Fort McMurray Fire Chief Darby Allen called the fire a “moving animal.”

The massive fire in Fort McMurray comes unusually early in the year. It’s an increasingly common occurrence thanks to climate change, which is lengthening the wildfire season and increasing fires’ intensity. Last year’s wildfires were among the most damaging in history. If this early May fire is any indication, that is sure to continue this year. Perhaps it is fitting that Shell, a company directly responsible for a great degree of climate change, has been forced to shut down operations in the area. More oil companies are expected to follow.

See scenes from the conflagration below.

Absolutely devastating what is happening in Fort McMurray right now. So thankful we have an incredibly hard working crew fighting this relentless fire. Hoping everyone made it to safety, relieved to report that my friends and family are safe. My heart goes out to all. Taken at 2pm, on the way back from site, by helicopter. #ymmfire #aerialphotography #fortmcmurray #ymm #heartbreak #wildfire #rmwb #alberta #forestfire