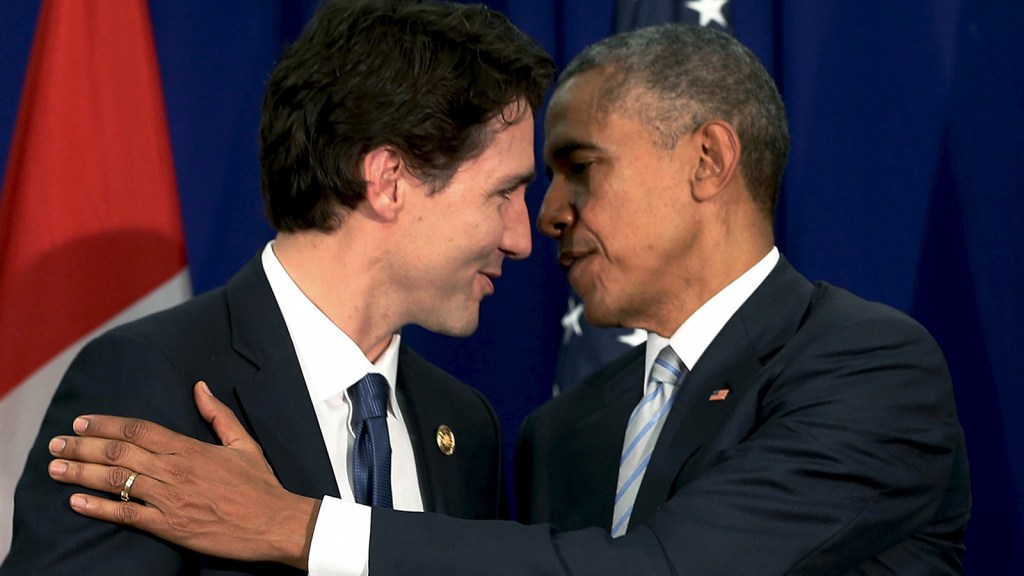 At long last, two countries that share a border will also share a comprehensive plan for climate action.

Serious climate conversations between the U.S. and Canada have been few and far between over the years. This week, the two countries are expected to present a unified front with a climate change agreement, a rare event, given that they have long been on opposite ends of the climate action spectrum.

The two nations’ leaders, U.S. President Barack Obama and Canadian Prime Minister Justin Trudeau, will announce a series of joint measures this week during a meeting at the White House. According to The Guardian, the agreement is expected to include pledge to cut up to 45 percent of methane emissions — a greenhouse gas that is roughly 80 times more potent than carbon dioxide — from oil and gas industries. During a White House press call on Tuesday, Todd Stern, U.S. special envoy for climate change, said that the meeting would focus on short-lived pollutants like methane, hydrofluorocarbons (potent greenhouse gases used in refrigerators, aerosols, and air conditioners), and black carbon (a particulate component of soot). Officials also expect the agreement to call for a decrease in diesel fuel and more funding for Arctic climate research.

One major focus for the two Arctic neighbors is addressing warming at the pole, a region which is warming twice as fast as the rest of the world.

“There’s a kind of canary-in-the-coalmine quality to the Arctic, and it’s important to let people around the world know what’s going on there and the impacts there, which will, in turn, have impacts around the world,” Stern told reporters.

It’s a rare breakthrough for the two leaders — one at the end of his tenure and the other just four months in. For much of the past decade, the two countries have been at odds on climate policy. Before Trudeau’s election last October, Canada was led by conservative Stephen Harper, who steered Canada into a pit of dirty oil. Harper kept the oil sands industry afloat throughout his tenure, beginning in 2006. Harper turned Canada into a booming petrostate, muzzling climate scientists who spoke out and  pushing hard for companies to be able to suck up the dirty substance lying under massive tracts of forest in Alberta. At the very same time, Canada’s neighbor to the south elected a Democrat in 2008, Obama, who promised to cut greenhouse gas emissions, amp up investments in clean energy, and was rumored to veto the Keystone pipeline (an action that he did in fact take in February 2015).

Before Harper’s administration, Canada had more of an appetite to fight global warming. Former Prime Minister Paul Martin, a liberal who served in office from 2003 to 2006, ratified the Kyoto Protocol, a global treaty to cut emissions. But the U.S. was under the eight-year reign of President George W. Bush, who opposed Kyoto, allegedly tried to block public scientific data on climate change, and broke campaign promises to limit carbon dioxide emissions from coal plants. “To the reticent nations, including the United States, I say this: There is such a thing as a global conscience,” Martin said about his southern neighbors in a 2005 conference in Montreal.

It’s not yet know exactly how far-reaching the terms will be in the expected climate agreement announced this week. But in a town hall hosted by The Huffington Post this week, Trudeau said that the moment was a “nice alignment between a Canadian prime minister who wants to get all sorts of things done right off the bat and an American president who is thinking about the legacy he is going to leave in his last year in office.” If all goes well, that legacy will finally include climate policy that crosses both country borders and longstanding ideological divides.