Las Vegas casinos want to go renewable, and that means a fight with the state's utility 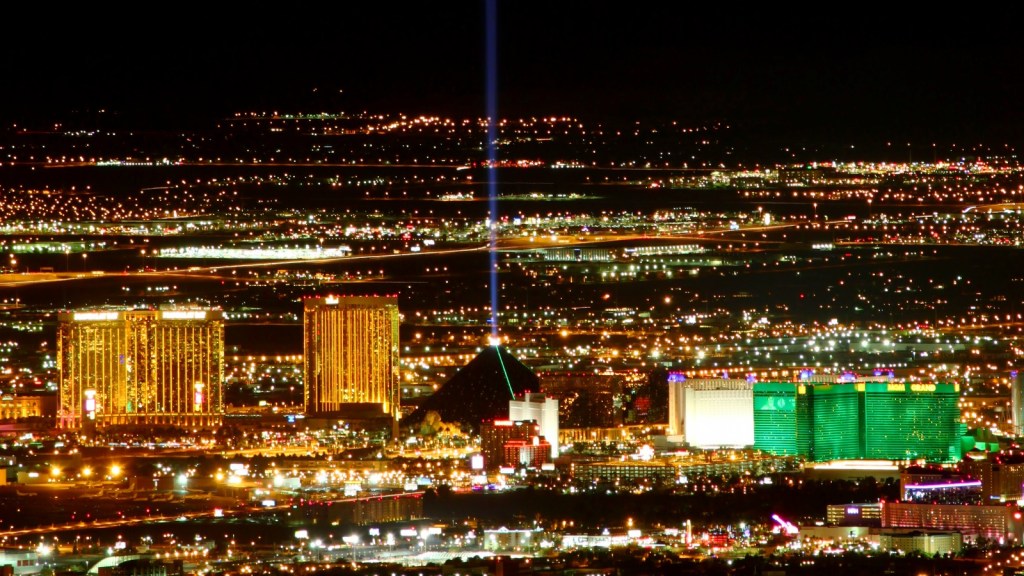 Las Vegas casinos want to go renewable, and that means a fight with the state’s utility

The glittering Las Vegas strip is not an obvious model for energy conservation.

Yet hidden above the glowing Eiffel Tower, neon resort awnings, and a black pyramid that shines a beam of light into space is one of the largest rooftop solar arrays in the country.

Twenty acres of sun-catching glass sit atop the Mandalay Bay convention center, and when new installations are complete, it will become the biggest rooftop solar array in the U.S.

In recent months, three of Nevada’s largest casino companies  — MGM Resorts, Wynn, and Las Vegas Sands — have announced plans to buy and produce more renewable energy for their hotels, a move driven both by increasing demand for responsible energy use from the companies that rent their conference halls, and a surplus of cheap power from solar farms in Nevada and California.

“It’s no accident that we put the array on top of a conference center. This is good business for us,” said Cindy Ortega, chief sustainability officer at MGM Resorts. “We are looking at leaving the power system, and one of the reasons for that is we can procure more renewable energy on the open market.”

But there is a big shadow lurking over a rapid greening of the Las Vegas strip. Regulators will not let casinos simply walk away from the state’s monopoly utility provider, NV Energy.

Together, the casinos’ 15 properties account for 7 percent of NV Energy’s electricity sales, and if that income were lost, the utility says, its remaining customers would have to endure significant rate hikes. As a result, the public utility commission (PUC) of Nevada is demanding resorts pay tens of millions of dollars to leave NV Energy’s services, a December 2015 decision which one casino has appealed.

Las Vegas’s power drama captures an ongoing dilemma in the new energy economy. While corporations have been encouraged to go green, their efforts pass the burden of subsidizing old utility regimes on to retail consumers, which regulators cannot allow.

“They need to maintain the grid. You cannot let these utilities go bankrupt or else every business in the city dies,” said Bill Ellard, an energy economist for the American Solar Energy Society. “What will happen if they don’t maintain the grid properly and the transformers blow?”

In December, Nevada’s three-member PUC effectively destroyed a thriving rooftop solar industry by approving NV Energy’s request to drastically lower the rate at which solar users are compensated for excess energy they provide to the grid.

“This is what I call a death spiral for utilities,” said Ellard. “They make it hard to go solar because once you defect from them, that affects revenue. Then they increase rates on everybody else, forcing them to defect.”

MGM Resorts has already hurt utility profits though an ambitious energy conservation effort. In addition to building a solar array strong enough to power 1,000 homes for one year, the corporation is replacing 1.3 million lightbulbs in its properties with LEDs.

But to power multi-thousand-room resorts which house nightclubs, pools, theaters, and slot machine-packed casinos would require more solar panels than the companies have rooftop space. They are consequently joining a trend in big energy consumers requesting to buy electricity outside the utility system.

“They are all very concerned with their bottom lines,” said Rebecca Wagner, a former member of Nevada’s PUC. “The energy market in the west is great right now, so they are seeking to curb costs by getting in that market.”

Cheap natural gas is probably driving the initiative more than anything else, Wagner says. But according to Ellard, the antipathy casinos have for NV Energy’s monopoly also previews the next phase in an energy economy where renewables are competitive with fossil fuel prices.

“It’s complex because it’s not just electricity,” he said. “It’s natural gas, wind, coal, smart grid, big data, oil — it’s all connected. We’re at this next change point where wind and solar [battery] storage and smart software are going to start to replace all those energy sources.”

If the resorts do decide to separate from NV Energy, it will still cost them a combined $126.5 million, a price set by the PUC which they say is necessary to prevent broad consumer rate hikes and to compensate the utility provider for losses incurred on power plants and other assets purchased with casino demand in mind.

The resorts have complained that this “exit fee” is too high — and perhaps even illegal. “The PUC has simply made up rules as it goes along so as to discourage any applicants from exiting [NV Energy’s] service,” Wynn lawyers stated in a January judicial appeal. (MGM and the Las Vegas Sands are considering their options.)

Wynn’s president, Matthew Maddox, also noted in PUC testimony that NV Energy is owned by Warren Buffett’s company, Berkshire Hathaway (based in Omaha, Neb.), and is therefore, in his estimation, more concerned with maximizing profits than with maintaining Nevada’s grid. Maddox pointed out that their money doesn’t even stay in Nevada, saying: “It goes to Omaha.”

Data storage company Switch faced a similar situation last year when it announced plans to use 100 percent renewable energy to power its giant computer servers. NV Energy was not able to meet those energy demands, and the PUC said the company would have to pay $27 million to break up with the utility provider since its large data centers amounted to nearly 3 percent of NV Energy’s electricity sales. As a compromise, Switch is paying the utility company to build a new solar array in North Las Vegas to meet their sustainability goals.

The city of Las Vegas, too, is planning to use 100 percent renewable energy to power its municipal buildings, fire stations, city parks, and streetlights by 2017. That would make Las Vegas the largest U.S. city to achieve such a goal. But to get PUC approval, it also had to promise to buy most of the power from an NV Energy solar plant in nearby Boulder City. Nevadans are thus subsidizing NV Energy’s green investments while it lobbies against private rooftop solar installations by their customers.

MGM Resorts’s sustainability chief, Ortega, would not comment on her company’s wrangling with NV Energy and the PUC. But she did endorse the broad push toward sustainability as a way to combat notions that Sin City lacks a conscience. “The more we can dispel the myths around Las Vegas the better destination it is,” Ortega said.

“We have the ability to educate a wide variety of stakeholders on how we can exponentially reduce environmental impacts,” she added. “Las Vegas is the perfect place to do that because we have 40 million people come here every single year, and so what better place to start telling that story.”