Residents of five Northeastern states are voting Tuesday in crucial presidential primary contests. On the Democratic side, Hillary Clinton has a chance to all but clinch the nomination with a strong showing. On the Republican side, Donald Trump is looking for massive victories that could put him one step closer to securing a majority of the delegates at the GOP convention in Cleveland.

The presidential election will, of course, have enormous implications for a range of issues — but some of the biggest consequences will relate to the fight against global warming. Clinton essentially wants to continue President Barack Obama’s climate policies. Her opponent, Bernie Sanders, wants to go even further by enacting a carbon tax. Trump and his closest rival, Ted Cruz, are both outspoken climate change deniers. John Kasich is somewhat less extreme on the issue but has still made contradictory statements about the science, and he refuses to commit to any meaningful action.

But what do the voters think?

Back on March 1 — as a dozen or so states around the country voted on Super Tuesday — we pointed out that the electorate that day contained an awful lot of deniers. Less than half of adults in those states — 48 percent — agreed with the scientific consensus that humans are mostly responsible for recent warming, according to data from the Yale Program on Climate Change Communication. Drawing from more than 13,000 interviews, the Yale researchers used a complicated statistical model to estimate the 2014 views of residents of every state, county, and congressional district on key climate science and policy questions.

This Tuesday, the voters look a bit different than they did on March 1. Residents of the Northeast hold some of the country’s most progressive (and accurate) views on climate change, according to the Yale study. Small majorities in most of Tuesday’s states — as well as in nearby New York, which voted last week — embrace the scientific consensus.

Here’s another way to crunch the same data. The researchers combined people who said global warming is caused mostly by humans with those who attribute it to both humans and nature. They also combined two kinds of climate science deniers: people who think the warming is natural and those who don’t think the planet is getting warmer at all. 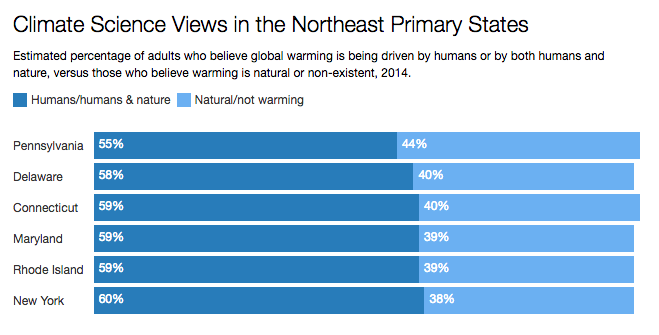 Those numbers look pretty good for science, especially when you compare them with those from some of the Southern states that voted on Super Tuesday. 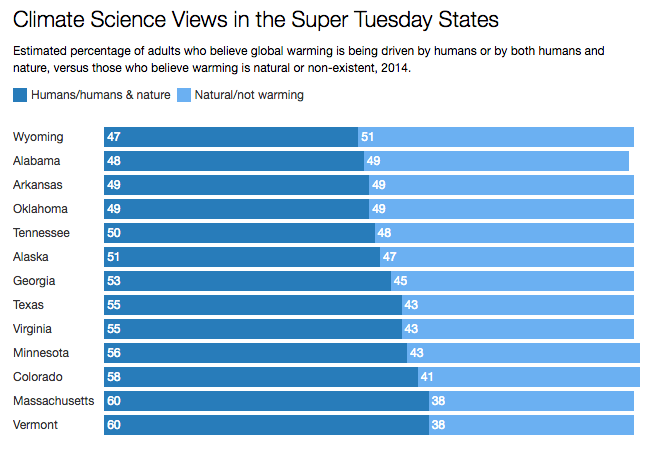 But here’s the thing: Trump may insist global warming is a “hoax,” but that isn’t stopping him from winning in states where most people understand he’s wrong. He won Massachusetts and Vermont on Super Tuesday. He won overwhelmingly in New York last week. And he’s leading in the polls in every state voting Tuesday.

That’s probably because voters in Republican primaries don’t have the same views on science as the average resident of their states. In New Hampshire, for instance, large majorities of Democrats and independents say humans are the main cause of global warming. But only a small minority of Republicans agree. Trump won New Hampshire by 20 percentage points.