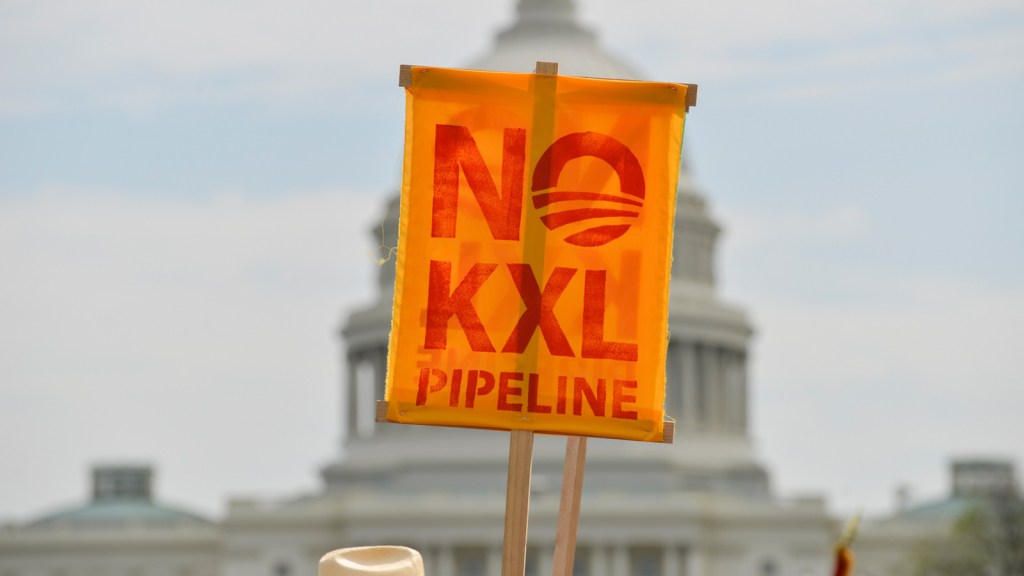 “Another Pipeline Rejected” is now the go-to headline for updates on new fossil fuel infrastructure in the United States. Does the growing file of scrapped pipeline plans forecast the “Keystone-ization” of our energy future? Yes — proposals for pipelines to transport oil and natural gas are being brought down by public protest so frequently, we now have a term for it.

A quick review: On Friday, the New York Department of Environmental Conservation announced that it would not grant a necessary permit for the 124-mile Constitution Pipeline proposed to run through the northeastern United States. The Earth Day announcement came after backlash regarding potential safety issues from residents, as well as from Democratic presidential candidate Sen. Bernie Sanders (I-Vt.), who said that the plan would be “catastrophic to our air and our climate.” The DEC ultimately refused to grant the permit after concluding that the pipeline would interfere with water resources in its path.

This latest decision follows the rejection, just days prior, of a $3.1 billion natural gas plan proposed by Kinder Morgan. Before that, the 550-mile Atlantic Coast Pipeline, which would have run through Virginia and West Virginia, was delayed earlier this year. Georgia’s 360-mile Palmetto Pipeline and Oregon’s 232-mile Pacific Connector Pipeline were both thwarted in March. All that went down in 2016 alone.

The mother of all these killed projects is, of course, the Keystone XL pipeline, a $7 billion undertaking that would have ferried 800,000 barrels of crude oil a day from Canada to the Gulf Coast — had President Barack Obama not vetoed it last November. Since that decision, the phrase “Keystone-ization” has come to connote the death of a proposed oil and gas pipeline — often due to public backlash.

“Fifty years ago, people in the U.S. were much more accepting of new pipelines and new infrastructure,” Rob Jackson, a professor at the Stanford University’s Woods Institute for the Environment who studies energy use and climate change, told Grist. “Today, people don’t want new pipelines and nuclear power plants near their homes and schools. The failure of Keystone emboldened people to fight the next project.”

“Keystone-ization” has become a rallying cry for writer and climate activist Bill McKibben, who uses it to encourage activists to protest new fossil fuel infrastructure. (Editor’s note: Bill McKibben is a member of Grist’s board). McKibben, however, repurposed it — how green of him — from Marty Durbin, President and CEO of America’s Natural Gas Alliance. Durbin said last year that the pipeline had become a model for climate activists, noting that it has changed the way fossil fuel companies operate:

“These aren’t new issues. These are things that pipeline developers have had to deal with for a long time. But we’ve seen a change in the debate. I hesitate to put it this way, but call it the Keystone-ization of every pipeline project that’s out there, that if you can stop one permit, you can stop the development of fossil fuels. That’s changing the way we have to manage these projects.”

Killing a pipeline plan, Jackson explained, could prevent fossil fuel extraction on the condition that there is no other way for the resources to reach the market. But in the case of oil, it also could backfire. If no pipeline is available, oil may travel by train. According to Jackson, pipelines look like a safer option when considering the terrible track record of oil train derailments — and therefore, the “Keystone-ization” of proposed pipelines may not be such a good thing after all.

At the same time, if oil prices remain low (as they are now), the cost of rail transport can be prohibitive — and when a pipeline is rejected, extracting the oil it was meant to transport may no longer be a profitable decision. If this is the case, Jackson explains, nixing a pipeline may help keep fossil fuels in the ground.

“Some people fight pipelines because they oppose any fossil fuel use. Viewed through that lens, blocking oil and gas pipelines makes sense,” said Jackson. “You will see a fight for every new pipeline from now on, I guarantee it.”