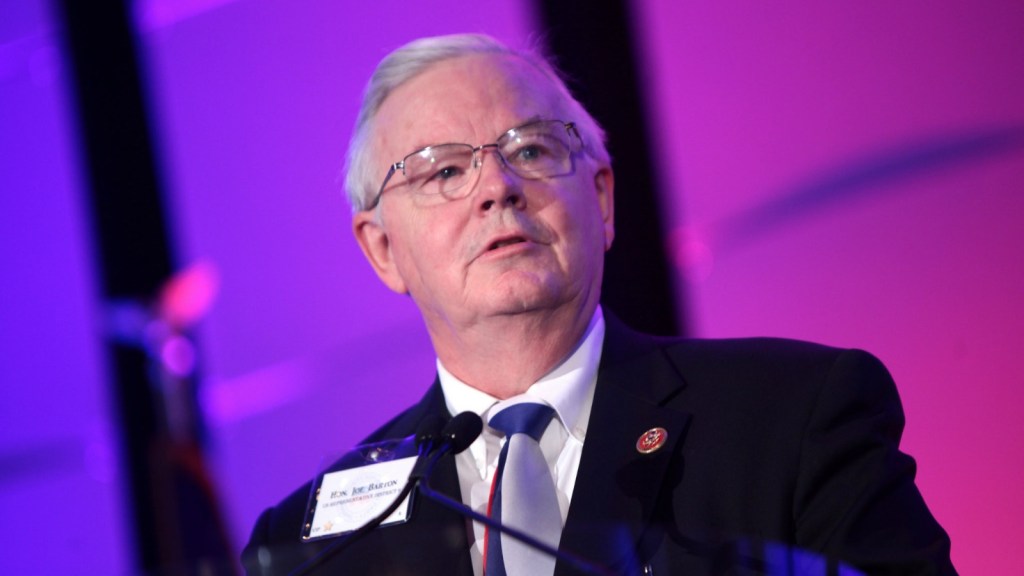 Joe Barton (R-Tex), who sought to subpoena after a climate scientists published a study supporting the concept of climate change. Flickr/Gage Skidmore
Politics

It’s become a go-to strategy for climate change deniers to demand subpoenas and documents from scientists whenever they get a whiff of a potential controversy. But they like it less when the same tactic is used on them.

Attorney general of the U.S. Virgin Islands Claude Walker served the conservative think tank Competitive Enterprise Institute (CEI) with a subpoena last Thursday, demanding several decades’ worth of communications, emails, and other documents pertaining to CEI’s work on climate change policy and donor information. By subpoenaing CEI, Walker is broadening “a multifaceted legal inquiry into whether fossil fuel companies broke any laws as they sought for decades to undermine the scientific consensus and head off forceful action to address the climate crisis,” reports InsideClimateNews.

Libertarian and conservative writers at at The Blaze, American Thinker, The Washington Times, Bloomberg View, and Cato Institute have criticized the subpoena, calling it the product of “hysterics,” part of an “absurd climate inquisition,” and a chapter in “Al Gore’s climate witch hunt.” CEI itself called the move “an affront” to its First Amendment rights, adding that if Walker succeeds, “the real victims will be all Americans, whose access to affordable energy will be hit by one costly regulation after another.”

Where was this outrage when right-wing politicians were doing the same, but to scientists? Republicans in Congress have given CEI and its allies plenty of opportunities to call out their own antics. For example:

1. House Science Committee Chairman Lamar Smith (R-Tex.) issued subpoenas to administrators and scientists at the National Oceanic and Atmospheric Administration (NOAA) in late 2015. Smith wanted their communications after the journal Science published a NOAA’s report debunking the deniers’ favorite excuse that global warming is on “pause.”

2. Smith has been on a tear lately. Last fall, he delivered a notice to Jagdish Shukla, a climate scientist at George Mason University in Virginia, which requested that Shukla “preserve all e-mail, electronic documents, and data (‘electronic records’) created since January 1, 2009,” pending an investigation. Shukla had signed a letter urging federal investigation of whether fossil fuel companies knowingly deceived the public on climate.

3. Joe Barton (R-Tex), a former chairman of the House Energy and Commerce Committee from 2004 to 2007, sought the personal emails of climate scientist Michael E. Mann in 2005, director of the Earth System Science Center at Pennsylvania State University, after Mann’s study showed a rapid increase in global temperatures.

4. In perhaps the most famous incident of its kind, a hacker got a hold of more than 1,000 emails and 3,000 other documents from climate scientists who were authoring a United Nations report on climate change consensus — deniers likened it to a major scandal, calling it “climategate.” They tried to find a smoking gun in climate science that didn’t exist. Ex-Virginia Attorney General Ken Cuccinelli demanded Michael Mann’s files from his former university as a result.

CEI is caught in the crossfire aimed at ExxonMobil of late, given CEI’s long history promoting inaccurate science and policies to discredit climate change action. Nineteen state attorneys general are already investigating ExxonMobil to determine whether the company broke the law in reportedly misleading its investors and the public about climate change. And it just so happens that Exxon happens to have contributed at least $1.6 million to CEI since 1985.

No matter what comes of CEI’s subpoena, it won’t stop the think tank’s allies from doing the same to target climate scientists.