Laws are only as good as their enforcement. During his four years in office, former President Donald Trump’s appointees to the Environmental Protection Agency, or EPA, decimated the agency’s ability to catch and penalize polluters breaking environmental rules. As a result of this and longer-term trends, facility inspections and civil cases filed against polluting operations like chemical plants and wastewater treatment centers dropped to their lowest levels in a decade last year.

The Biden administration is now attempting to reverse course. While the new president’s flurry of executive orders promoting a unified national and international strategy to tackle climate change have made headlines, his nascent efforts to restore the EPA’s ability to use its full range of enforcement powers have received less attention. After Biden signed an executive order instructing federal agencies to “hold polluters accountable,” the Department of Justice, or DOJ, retracted nine Trump policy documents last month.

In part, those Trump-era policies restricted the EPA’s ability to permit polluters to make significant investments in community remediation projects in exchange for resolving law enforcement actions against them. The DOJ noted that this restriction was a departure from longstanding policy and a possible impediment to the “full exercise of enforcement discretion.” The idea is that flexible enforcement agreements allow the EPA to ensure that polluters mitigate the harm they cause by funding cleanup, air and water quality monitoring, and other restorative efforts.

“It is reassuring to see a quick return to the rule of law at DOJ,” said Cynthia Giles, who was in charge of enforcement at the EPA during the Obama administration. “Getting these barriers out of the way lets EPA and DOJ do their job: making sure environmental standards are protecting people.”

As a new administration begins to confront the Trump EPA’s legacy, it now faces the herculean task of restoring the agency’s ability to adequately enforce environmental laws. Giles, other former enforcement officials, and environmental advocates who spoke to Grist said that the Biden EPA has a long road ahead of it. Not only must the agency restore staffing — which under Trump plummeted to levels not seen since the Reagan years — but it also needs to increase the number of inspections it conducts, create frameworks for innovative new settlement agreements that hold polluters accountable and benefit communities, and support citizen suits against polluters. Many of these changes will roll back Trump-era policies, but some — such as making data available to support citizen suits and ramping up inspections — are new initiatives that advocates say are required to tackle a long-term slump in enforcement.

“It won’t be easy,” said Tim Whitehouse, who was a senior EPA attorney under former President Bill Clinton and is now executive director of the nonprofit Public Employees for Environmental Responsibility. In the wake of the Trump administration, according to Whitehouse, the EPA has “become more and more timid” about pursuing inspections without the permission of state governments. In 2019, the Trump administration adopted a “no surprises” policy that meant EPA inspectors would no longer show up at facilities without first notifying state environmental agencies. Environmental advocates feared that the policy would result in facilities getting unprecedented advance notice of inspections, particularly in states where industrial polluters and regulating agencies have close relationships. Whitehouse told Grist that such practices severely limit the EPA’s ability to collect the evidence necessary to build cases against polluting companies.

In a series of memos, the Trump EPA also gave states more authority to implement their own enforcement programs. The deference to individual states is a shift away from vigorous enforcement at the EPA, according to Whitehouse. Sometimes that’s not apparent at first glance; after all, environmental agencies are on the front lines of enforcing many of the nation’s most important clean air and water rules. The EPA functions as a backstop, ensuring that the states are enforcing laws appropriately and stepping in to take on bigger cases.

In a 2019 memo promoting “effective partnerships” between states and the EPA, however, the federal agency shifted that balance of power in favor of the states. “The EPA will generally defer to a state as the primary implementer of inspections and enforcement,” the memo states, excepting a handful of cases in which it will retain authority, such as when the states request assistance or don’t have adequate resources.

Giles, the former EPA enforcement chief, described the policy as essentially giving states a veto option. “There was a lot of language and words around this, but essentially it said states can can veto EPA enforcement action,” she told Grist. “It doesn’t use the word ‘veto.’ But everyone that works in enforcement knows what it means. Nobody was confused; they understood.”

Other policy changes also contributed to what Giles called the Trump administration’s “sand-in-the-gears” approach to environmental enforcement. In another memo, the EPA made it more difficult for regional enforcement personnel to investigate environmental violations. The guidance document instructed staff to minimize transaction costs for companies and to “consider whether each piece of information requested (or each question) is truly necessary.” The memo also instructed staffers to watch their tone when collecting information about a potential violation: “The tone of information requests should be polite, and should thank the recipient in advance for its cooperation.”

In 2017, the Trump EPA announced that it wouldn’t inspect some of the largest power plants and industrial facilities to verify emissions estimates and would only take enforcement action if a facility had been in operation for at least five years. Separately, it also rescinded Obama-era policies that encouraged EPA staff to require polluters to set up sophisticated air quality monitoring systems as part of settlement agreements and use qualified third parties to verify compliance.

While none of these policies alone significantly undermined enforcement, their combined effects gummed up the agency’s ability to pursue polluters, according to Giles. The result was a “precipitous cliff-like fall off in cases,” she said. “[The Trump administration] made no secret of the fact that they were opponents of enforcement.”

From October 2015 through September 2017 — the fiscal years that overlap most closely with the final two years of the Obama administration — the EPA collected almost $8 billion in penalties. But in the following two years, that number fell to just $432 million. Analyses by nonprofit groups also show that the Trump administration’s enforcement slowdown led to significantly fewer investments in cleanup efforts by polluters. 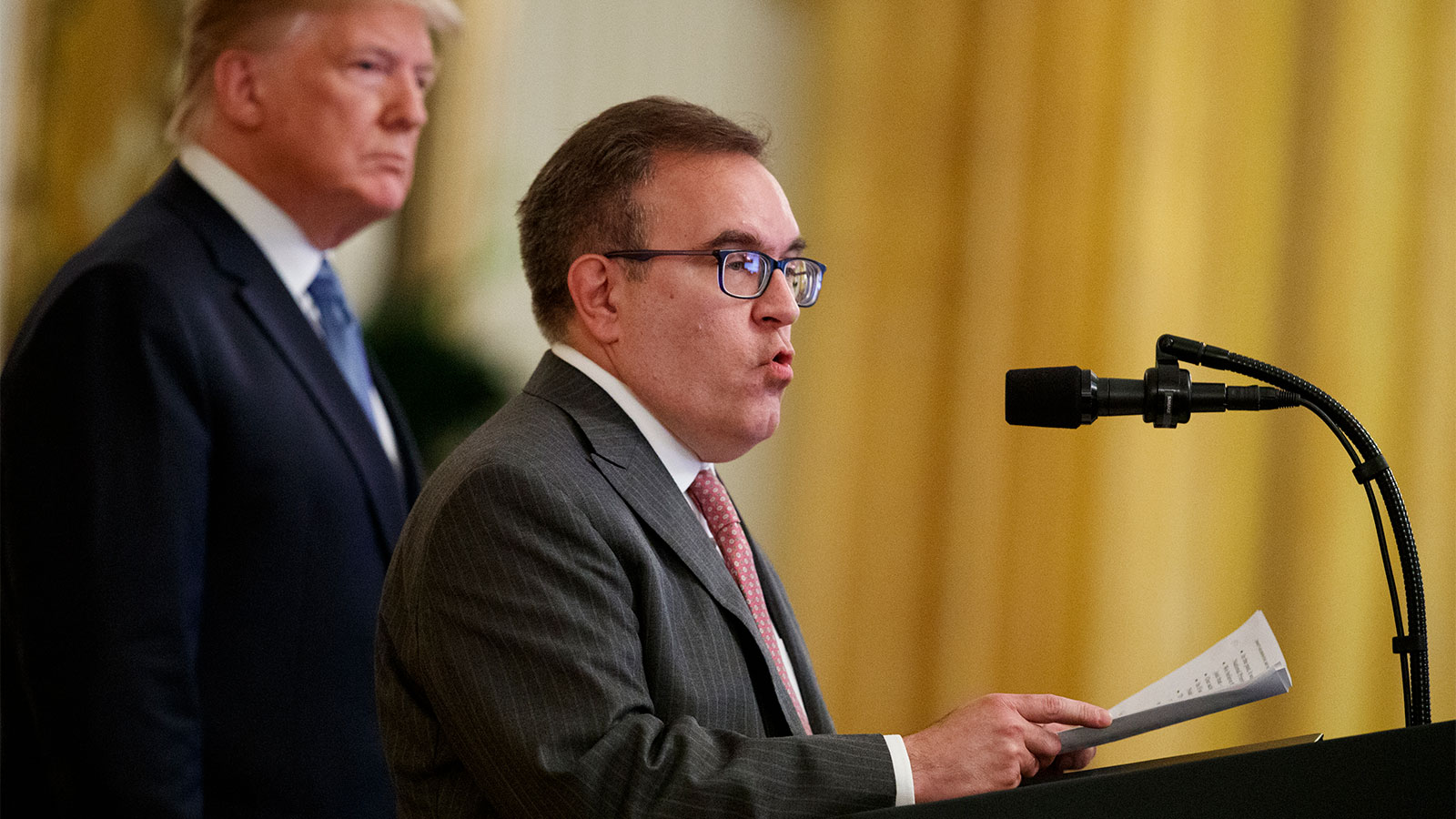 Under former administrators Andrew Wheeler (pictured above) and Scott Pruitt, the Trump EPA scaled back its enforcement of environmental laws, deferring to states and industries. AP Photo / Evan Vucci

The diminishment of enforcement under Trump is part of a longer-term trend. Since the 1990s, the number of cases initiated and penalties collected by the EPA have been steadily declining. That downward trend has been true under both Republican and Democratic administrations. According to a report by the Environmental Data and Governance Initiative, a nonprofit tracking the EPA’s enforcement work, the number of new civil cases opened by the agency in 2018 was the lowest it’s been since 1982. Civil fines that year were at their lowest total since 1994. Those declines may be tied to reduced funding: Between 2008 and 2018, Congress cut the EPA’s budget by 16 percent.

Whitehouse said that the deprioritization of enforcement can largely be attributed to powerful industries increasingly controlling the levers of power in government. Even prior to the Trump administration, researchers were finding evidence of regulatory capture at the EPA, meaning that the agency was often staffed with former industry executives. This revolving door between industry and government could mean that polluting businesses get a more prominent seat at the regulatory table than others. One 2010 study, for instance, found that the EPA communicated with industry representatives an average of 84 times before proposing any given new air quality rule. By comparison, the agency communicated with public interest groups less than one time per rule, on average.

“We’ve seen more and more regulatory capture of our different environmental agencies,” said Whitehouse. “I attribute that to the gradual erosion of EPA enforcement programs, which accelerated greatly under President Trump but has been at least 20 years in the making.”

In order to restore enforcement, the Biden administration needs to appoint EPA and DOJ leaders who clearly signal that they will enforce laws that protect public health and the environment, Whitehouse said. President Biden has nominated Michael Regan, former head of the North Carolina Department of Environmental Quality, to lead the EPA. Regan’s tenure in North Carolina was marked by an increase in the state agency’s inspection capacity and the establishment of new environmental justice measures — but also, according to critics, by Regan’s deference to many of the wishes of the state’s major polluters. Biden has not yet nominated an assistant administrator to head the EPA’s enforcement division. That position will require Senate confirmation.

Kelsey Breseman, an Environmental Governance and Data Initiative researcher, said that the Biden administration “needs to go pretty far beyond restoration to back before Trump.”

“Our country is more populous than it was in the Obama era, and the climate crisis is more urgent,” she said. “We need this new administration to give us a reason to believe in our future.”