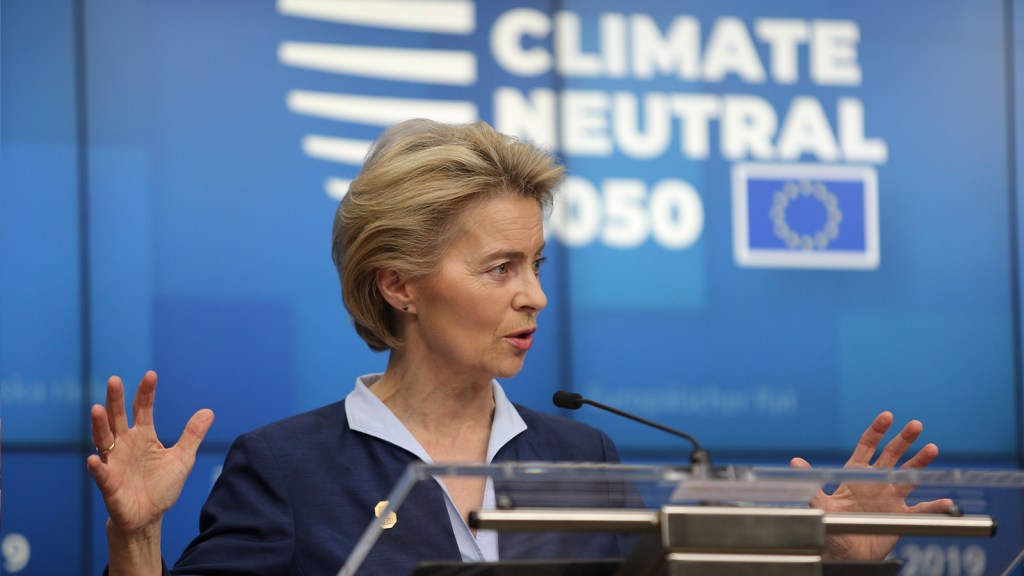 The European Union is the world’s third-largest polluter after China and the United States. On Wednesday the European Commission, the E.U.’s executive branch, introduced its proposal for a “Green Deal”— a major plan to make the body carbon neutral by 2050.

In a statement, European Commission President Ursula von der Leyen called the plan Europe’s “‘man on the moon’ moment.” The proposal includes a roadmap of more than 50 actions Europe would take over the next few years to pull off its emissions goal, the first of which is to create a European “climate law” by March of next year that expressly commits member nations to the 2050 net-zero target.

At a glance, the plan seems to include all the key ingredients that “Green” and “Deal” have come to signify for lefties. There’s an initial target of reducing emissions by at least 50 percent by 2030, a fund to assist communities that will be left behind as fossil fuel jobs are phased out, and promises of building renovations and transportation overhauls.

But critics say the Commission’s use of the “Green Deal” label is a misleading act of greenwashing.

Pawel Wargan, a coordinator for the group Green New Deal for Europe, which has put out its own roadmap, criticized the Commission’s plan on Twitter of failing on seven counts: size, scope, structure, scale, strategy, substance, and speed. He said the plan should include greater investment and faster decarbonization and decried the way it pits Europe against other global superpowers. The plan includes a border-adjustment carbon tax — basically a tax on imports of goods from countries with weaker climate goals intended to stimulate local economies. (It’s an idea that has been suggested by at least one progressive U.S. presidential candidate: Elizabeth Warren.)

Wargan and other left-leaning critics are disappointed by the plan’s commitment to the “dogma of endless growth.” Von der Leyen, whose politics are center-right by European standards, has called the Green Deal Europe’s new “growth strategy” and asserted that the plan will allow Europe’s GDP to continue to grow while sparing the environment from further harm. The plan’s opponents also take issue with what they see as its commitment to fiscal austerity. “What happens when you excise the ‘New Deal’ part of the Green New Deal?” David Adler, a colleague of Wargan’s, asked on the podcast TRASHFUTURE on Wednesday. “You take out the Rooseveltian premise of actually investing in Europe, investing in communities.”

Adler and Wargan have criticized von der Leyen’s plan to use the European Investment Bank to “unlock” more than $1 trillion in private financing for climate investments, rather than making public investments to create public jobs. “It runs so counter to the premise of the Green New Deal as all of us understand it,” Adler said on TRASHFUTURE. “All the good shit we associate with AOC or the Labour Party or the Green Party. They’ve taken that idea and inverted it, and delivered this plan that does not stand to benefit European citizens at all.”

At this point Europe’s climate plan, whatever color or shape it is, is just a proposal, and neither the policy ideas it contains nor the financing are fully fleshed out. On Thursday, 27 out of 28 E.U. leaders agreed to pursue the net-zero goal. Poland, which burns a lot of coal, opted out for now. That means the commission will start rolling out more concrete proposals next year.

But the initial backlash to the plan offers a sneak peek at the inevitable tug-of-war between enacting climate policy that the left will get behind and enacting any climate policy at all.