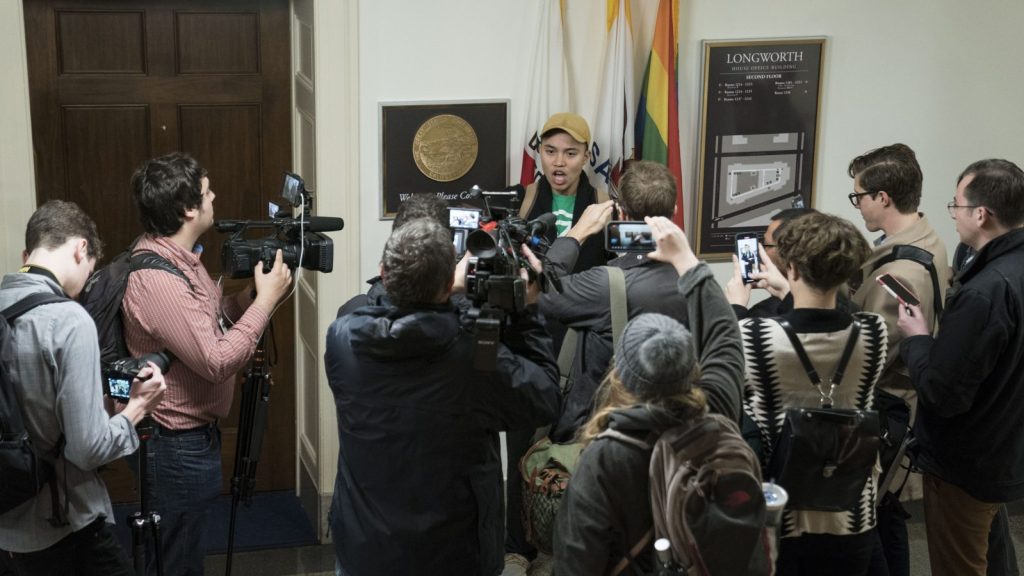 Young activists frustrated and frightened by Democrats’ inaction on the climate crisis occupied the office of the top Democrat in Congress on Monday to mark the beginning of a hunger strike.

Roughly a dozen strikers with Extinction Rebellion are taking part in a global climate hunger strike that nearly 300 people have pledged to join.

They say the House speaker, Nancy Pelosi, is holding back progress, so they are targeting her instead of top Republicans. They are demanding that she meet with them for an hour on camera before they call off their hunger strike.

“Every day the evidence piles up at your desk, but you have yet to pass even symbolic legislation recognizing the climate crisis as a national emergency. With all due respect, you have failed,” the group said in a letter to Pelosi.

Pelosi’s office contested allegations of inaction but did not say whether Pelosi or her staffers would meet with the protesters. In a press statement, Pelosi cited a bill the House passed to keep the U.S. in the Paris climate agreement, which Donald Trump is exiting. The international pact is voluntary, and experts say it is not strong enough and also not being upheld by many countries.

Extinction Rebellion calls for governments to declare a climate and ecological emergency, cut heat-trapping pollution to net-zero by 2025, and create a citizen’s assembly to direct a way forward. Their demands are far more aggressive than most environment organizations.

They want radical change to keep world temperatures from climbing 3 degrees C or beyond the normal of just a century ago and disrupting human civilization. Thousands of scientists warn of a future that threatens “untold suffering.”

On Monday, the strikers were given vitamins and supplements and weighed before beginning their protest. Not all of the hunger strikers were present. Some will participate in the sit-in later this week, when they are able to miss work. Pelosi’s office issued a press statement but did not respond directly to Extinction Rebellion.

Seventeen-year-old Sophia Kianni, in a speech she planned for the hunger strike said “it is deeply saddening and shameful that we must resort to a hunger strike just to get our leaders to care about their children’s futures. Our nation’s leaders would rather watch climate activists starve than give us the time of day.” She accused Pelosi of employing “cowardly politics,” and “worrying about alienating big businesses.”

Nick Brana, a spokesperson for Extinction Rebellion in Washington, accused Pelosi of holding back a resolution to declare a climate emergency and a Green New Deal and “neutering” a special House climate committee that does not have the power to subpoena fossil fuel companies or the ability to write legislation.

Twenty-year-old Giovanni Tamacas, whose Washington hunger strike the Guardian reported on in August, said he joined Extinction Rebellion because he felt other climate activism groups were not disruptive enough. He came to the organization after some of its protesters stripped off their clothes to draw attention to the crisis in the British parliament.

Young people around the world have been striking from school on Fridays in solidarity with Greta Thunberg. Celebrity activist Jane Fonda, 81, is also protesting at the U.S. Capitol every Friday too and has been arrested multiple times.

“The way that this movement is going is we’re going to need more and more extreme actions in order to bring the climate crisis to the forefront of the debate, and you know it’s going to take mass participation in civil disobedience and direct action,” Tamacas said.