It's time to get rid of old, racist Confederate statues - Grist 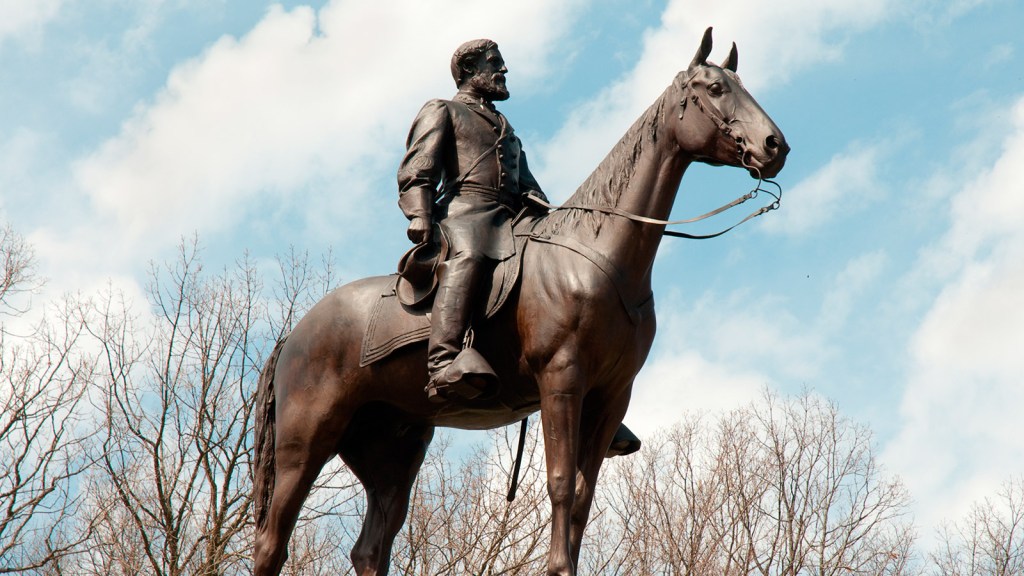 It’s time to get rid of old, racist Confederate statues

Vandalism is bad for parks, right? But here’s an exception: when the object being vandalized celebrates racism, violent exploitation of African-Americans, and treasonous military assault on the United States. In that case, the vandals are standing up for their community — and the thing that must go isn’t the graffiti they painted but the monument they painted it on.

On Monday, someone spray-painted “Black Lives Matter” on a statue erected by the Maryland Daughters of the Confederacy in 1903 on the grassy median strip of an avenue in Baltimore. The statue’s inscription reads, “To The Soldiers and Sailors of Maryland In The Service Of The Confederate States of America, 1861-1865.” It might as well read, “To black Marylanders: Fuck you.” Perhaps it should add, “Oh, and fuck you to all the Marylanders who fought for the Union in the Civil War, to their descendants, and to every other patriotic American and advocate for civil rights.” (While Maryland stayed in the Union and most Marylanders who fought in the Civil War were in the U.S. military, Maryland was a slave state, and a substantial minority of Marylanders joined the Confederate Army.)

Parks and public spaces exist to bring a city’s residents together, to provide them physical and psychological relief and elevation from the hassle of urban life, and to honor the community. Great urban parks like New York’s Central Park are the very heart of their surrounding communities, the place where people from all walks of life come together in peace and harmony. The community in Baltimore is majority black. Most white Baltimoreans are neither racist nor treasonous (at least, so one hopes). A Confederate statue on public grounds is a middle finger to them all. For decades, Confederate sentimentalists have argued that the symbols of Southern secession represent regional pride and the case for states’ rights. But the truth has always been uglier. The symbols of the Confederacy are statements of white supremacy, and thus at odds with the principle of environmental equity, which dictates that nature and public spaces should be equally accessible and welcoming to everyone, regardless of race.

A debate is raging right now around the Confederate flag and other Confederate symbols. After Dylann Roof, a virulent racist who sported a Confederate flag license plate on his car, killed nine black people at a historic Charleston church last Wednesday, liberals like The Atlantic’s Ta-Nehisi Coates called for removing the Confederate flag from in front of the South Carolina State Capitol. Republican presidential candidates such as Ted Cruz, Mike Huckabee, Rick Perry, Marco Rubio, and Rick Santorum, with the bravery and integrity you would expect from people who claim not to accept climate science, refused to support the flag’s removal, saying it is up to South Carolinians. Democrats Hillary Clinton, Martin O’Malley, and Bernie Sanders all said the flag should be pulled from the state capitol grounds.

But the public outcry has swelled, and on Monday South Carolina’s Republican governor, Nikki Haley, called on the state legislature to remove the flag. So have both South Carolina’s Republican senators, Tim Scott and Lindsey Graham, although Graham — who is also a presidential candidate — had taken the opposite position just days earlier. The state law that placed the flag in front of the Capitol in 2000 was actually a compromise that bowed to public pressure to get the flag off the top of the Capitol dome, where it had been placed in 1962 as an expression of opposition to the civil rights movement.

It remains to be seen if the heavily conservative and Republican South Carolina legislature will heed Haley’s call. But even if it does, the move should be just the beginning of a campaign to remove all Confederate symbols from parks and public squares across the U.S. As Fusion notes, “The Civil War ended 150 years ago, but physical signs of its presence are seen all over the South: monuments, courthouses, schools, cities, counties. They can even be found in places you wouldn’t expect, as far afield as Ridgefield, Wash., or Helena, Mont.”

Some of the South’s most beautiful, even most liberal, cities are blighted with these monuments to oppression, violence, and treason. Forsyth Park, in the heart of historic Savannah, Ga., features a monument to the Confederacy. A statue of Confederate General Robert E. Lee stands in Lee Park in Charlottesville, Va. These are lovely towns to visit, with downtowns that showcase attractive historic architecture, walkable urbanism, and great public spaces. Until, that is, you look up and see a statue that honors bigotry.

That vandal in Baltimore is not the only one with the right idea. On Tuesday night, on the University of Texas’s campus in Austin, “Black Lives Matter” was sprayed on statues of Lee, Confederate President Jefferson Davis, and Confederate Gen. Albert Sidney Johnston. There are also more democratic calls for their removal: The University of Texas-Austin student government circulated an online petition Sunday asking university president Greg Fenves to remove the Davis statue. Even in smaller towns like Statesboro, Ga., petitions are circulating calling for the removal of statues of Confederate soldiers.

While Fenves hasn’t commented on UT’s Confederate statues, some elected officials are stepping up to do the right thing. But so far the movement to remove these Confederate symbols is too limited. In Tennessee, Democrats U.S. Rep. Jim Cooper and state House Minority Leader Craig Fitzhugh called for a bust of Nathan Bedford Forrest, a Confederate general and an early Ku Klux Klan leader, to be moved out of the State House. Tennessee Republican Party chair Ryan Haynes said that, were he a state legislator, he would vote to get rid of it. That would be a good first step — after which Tennessee should change the name of Nathan Bedford Forrest State Park so that black Tennesseans needn’t be offended every time they visit it. Virginia Gov. Terry McAuliffe (D) ordered that Confederate flags no longer appear on license plates. Richmond, Va., was the capital of the Confederacy, and it is the state capital today. The city has monuments to Davis, Lee, and other Confederate leaders. If McAuliffe is serious about cleansing his state of racism, he’s got a lot left to do. In fact, even in Baltimore, there’s a statue of Lee and a park named for him.

A public park named for a Confederate general, or containing a monument to him, says to an African-American citizen that this space honors not her, nor the sacrifices of her ancestors, but instead those who fought to keep her ancestors in chains. Why would anyone want to relax under the shadow of such an affront? How can a public plaza that sends such a divisive message build social harmony?

If you go to Berlin, Germany, you will find memorials to the victims of the Holocaust and members of the German Resistance, but no statues honoring Adolf Hitler or Nazi generals. That’s because a civilized country salutes not its genocidal white supremacists, but the targets of their crimes, the opponents of their regimes, and the soldiers who vanquished them. It’s time for the U.S. to start acting civilized.