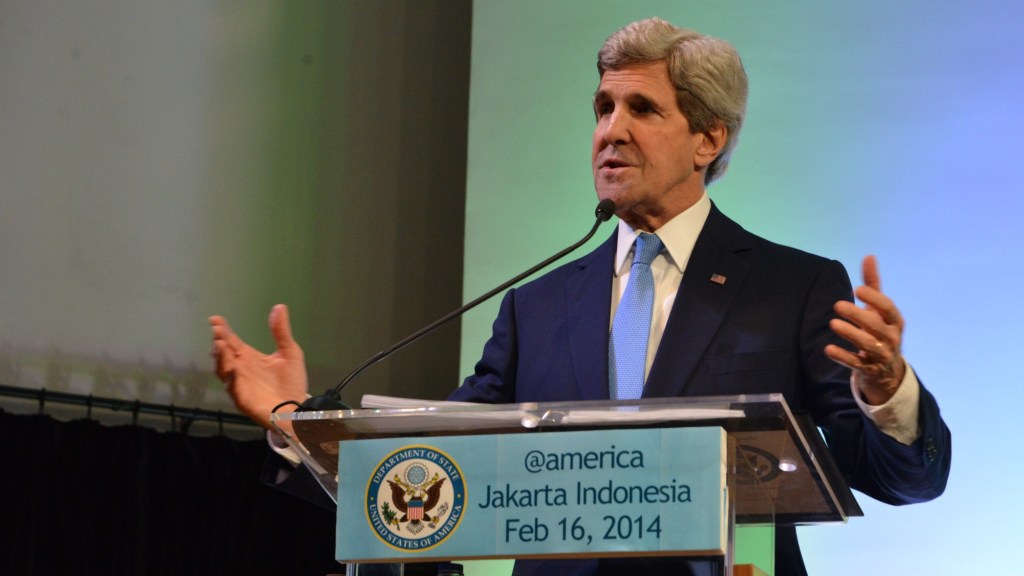 During his time as president, George W. Bush’s foreign policy was driven largely by fear of terrorists and WMDs. Obama’s State Department seems at least equally worried about climate change.

Secretary of State John Kerry gave a speech in climate-vulnerable Indonesia on Sunday during which he mocked climate deniers and compared the threat of global warming to terrorism and poverty. The speech came a day after Kerry visited China, where he worked out details of a U.S.-China climate agreement struck last year.

Here are some highlights from his speech in Jakarta:

Think about this: terrorism, epidemics, poverty, the proliferation of weapons of mass destruction — all challenges that know no borders. The reality is that climate change ranks right up there with every single one of them. …

The science of climate change is leaping out at us like a scene from a 3D movie. It’s warning us; it’s compelling us to act. And let there be no doubt in anybody’s mind that the science is absolutely certain. It’s something that we understand with absolute assurance of the veracity of that science. …

This is not really a complicated equation. I know sometimes I can remember from when I was in high school and college, some aspects of science or physics can be tough — chemistry. But this is not tough. This is simple. Kids at the earliest age can understand this. …

If we truly want to prevent the worst consequences of climate change from happening, we do not have time to have a debate about whose responsibility this is. The answer is pretty simple: It’s everyone’s responsibility. Now certainly some countries — and I will say this very clearly, some countries, including the United States, contribute more to the problem and therefore we have an obligation to contribute more to the solution. …

Think about the proliferation of weapons of mass destruction. It doesn’t keep us safe if the United States secures its nuclear arsenal, while other countries fail to prevent theirs from falling into the hands of terrorists. …

Kerry is clearly pushing the administration’s argument that rich and poor countries alike should be required to cut emissions under a new climate treaty to be hammered out next year.

Perhaps the U.S. could set a good example by ending its coal giveaways and exports, its oil-drilling binge, and its embrace of climate-toasting natural gas.