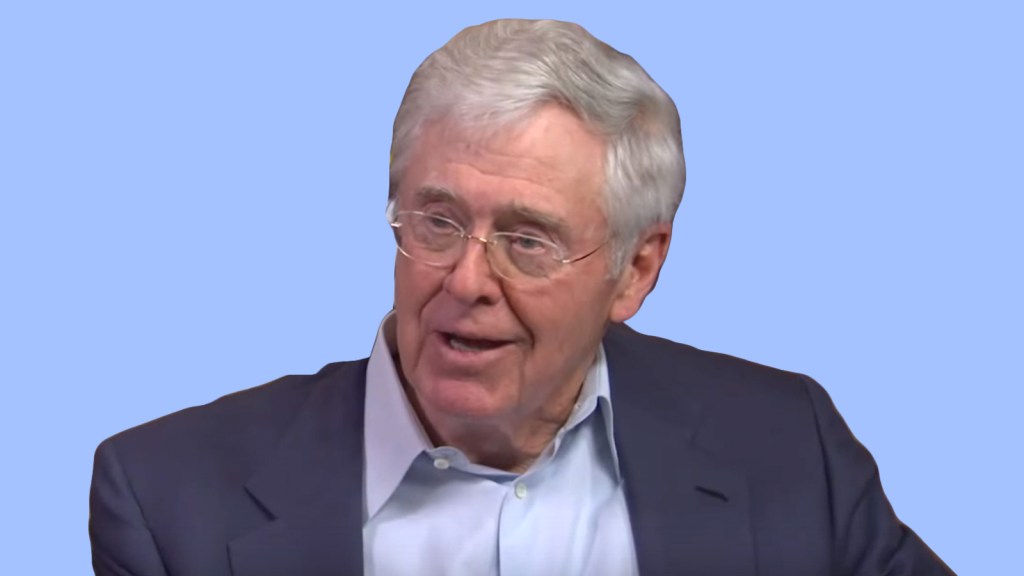 In a new op-ed published in The Washington Post, Charles Koch — the billionaire industrialist who is predicted to raise nearly $750 million to install a Republican in the White House this year — has some gracious words for one of the presidential hopefuls. And who exactly has garnered the praise of one of the most influential conservatives on the planet? Is it Bush? Trump? Cruz? Rubio? Kasich? Carson? Richard Nixon’s false teeth? Ronald Reagan’s hairpiece? George Bush’s AA sponsor? Carli Fiornia’s at-home printer? Rick Santorum’s wet wipes?

The senator is upset with a political and economic system that is often rigged to help the privileged few at the expense of everyone else, particularly the least advantaged. He believes that we have a two-tiered society that increasingly dooms millions of our fellow citizens to lives of poverty and hopelessness. He thinks many corporations seek and benefit from corporate welfare while ordinary citizens are denied opportunities and a level playing field.

I agree with him.

Now, that doesn’t mean Koch is feeling the Bern. In fact, he goes out of his way to make it clear that this is in no way an endorsement of the socialist senator from Vermont. But Koch says he agrees with Sander’s opposition to corporate welfare. Koch also opposes regular welfare, the kind that keeps children fed, but he’s apparently willing to overlook Bernie’s stance on not starving children to death this one time. “I applaud the senator for giving a voice to many Americans struggling to get ahead in a system too often stacked in favor of the haves,” Koch writes, “but I disagree with his desire to expand the federal government’s control over people’s lives.”

That “government control,” one might assume, includes regulation of Koch’s own business. Koch, who is worth over $40 billion and owns the second largest company in the nation, has spent a fortune trying to thwart environmental regulations. The Koch brothers spent over $120 million supporting campaigns to spread disinformation about the causes of climate change, for instance, and are responsible for some of the worst pollution in the world.

As for how Bernie feels about receiving this nod from a man he has accused of attempting to circumvent the democratic process, no comment from the Sanders camp. But in the unlikely event that Charles Koch offers any material support to Sanders, it seems unlikely he would take it. “Our great nation can no longer be hijacked by right-wing billionaires like the Koch brothers,” wrote Senator Sanders. “For the sake of our children and our grandchildren, for the sake of our economy, we have got to let democracy prevail.”