McKibben to Obama: You still have time to be a climate champion -- but not much 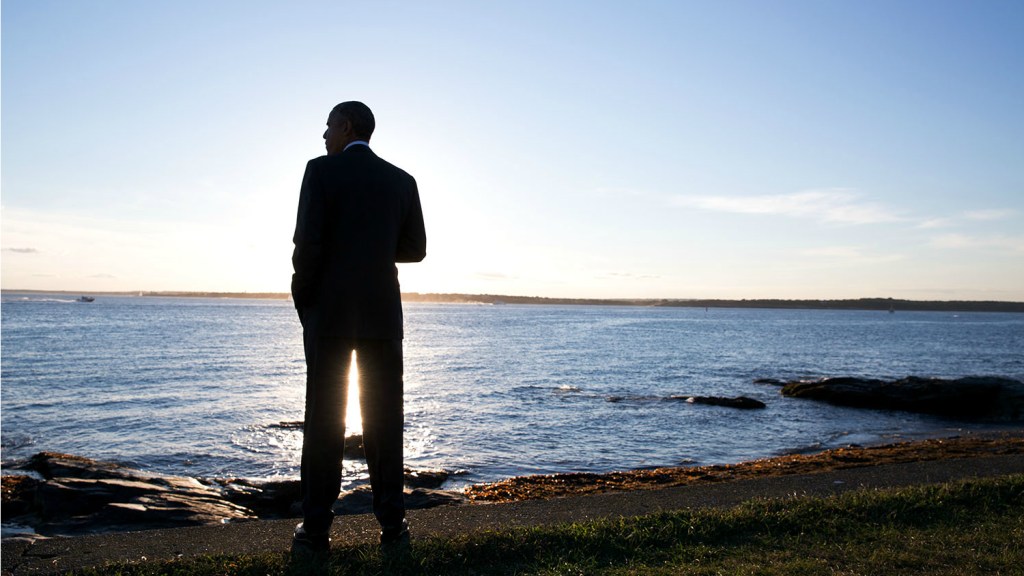 Pete Souza / White House
An open letter to the president

McKibben to Obama: You still have time to be a climate champion — but not much

I feel a little awkward writing a letter to you, perhaps because I helped organize the largest demonstrations outside your house during your residence there: It’s odd to write someone when the closest you’ve ever come to them is being chained to the fence outside their home protesting the Keystone pipeline.

But I’ve had a very long time to think about global warming — since the late 1980s, when I published the first book for a general audience on the topic of what we then called the greenhouse effect. And so I thought I might offer a few thoughts. It’s only in the last three or four years that climate’s political dimensions have come into clearest focus for me, beginning in some ways with those Keystone demonstrations. As I’ve learned more about how Washington works, I’ve understood better some of the paths you took and didn’t. With 18 months left in your administration, the summing-up mood is appropriate — but not entirely, since time remains for a series of fateful decisions that will shape your legacy, but more importantly the planet’s future atmospheric chemistry.

Credit where it’s due

There are moments, I think, when some in your administration have thought the climate movement paid too little heed to the things you have accomplished. And so one begins there, with credit that is in fact due:

In fact, that list beats the combined efforts of all the presidents that came before you in the global warming era. And that you achieved these things in the face of GOP congressional intransigence that made the obvious policy change (a price on carbon) impossible means that no one can accuse you of neglecting the issue. It’s true that our carbon emissions have risen the last two years, but perhaps you’ve put us on a course to meet the moderate reduction targets you and the Chinese agreed on.

But it’s not nearly enough

The problem, of course, is that 20 years ago those changes would have gotten us ahead of the physics. Now, given the hole we’re in and the pace that the world is warming, we’ve lost ground during your tenure despite those efforts. The G7 communique talking about getting the world off fossil fuel by century’s end is way too close to business as usual.

Consider: It was during your time in office that the world came to truly understand climate as an issue of justice above all, as refugees began to flee the damage of drought and flood on every continent. In your years, the Arctic melted in earnest, the ocean rapidly acidified, and America suffered through its hottest year ever. That was 2012, when you were campaigning for re-election, and yet you virtually never mentioned global warming till Hurricane Sandy in the closing days made it impossible not to. Instead you gave a talk at Cushing, in Oklahoma, that I’ve never forgotten, the one where you said:

Now, under my administration, America is producing more oil today than at any time in the last eight years. That’s important to know. Over the last three years, I’ve directed my administration to open up millions of acres for gas and oil exploration across 23 different states. We’re opening up more than 75 percent of our potential oil resources offshore. We’ve quadrupled the number of operating rigs to a record high. We’ve added enough new oil and gas pipeline to encircle the Earth and then some.

And that’s a huge problem. Because cutting demand for dirty energy at the same time that you increase its supply is called running in place. America on your watch has passed Saudi Arabia and Russia to become the biggest oil and gas producer on Earth. That may have been a short-term boost to the economy, but it’s a long-term horror for the atmosphere. If we send those hydrocarbons overseas to burn (coal exports have jumped in your tenure, and you’ve been granting permits left and right for new natural gas shipment facilities), then the secondhand smoke causes just as much global warming as if we’d burned them here; if we substitute them for imported energy, that frees up that much more oil and gas abroad.

In the course of your term, scientists have become unambiguously clear: to deal with climate change, we need to leave 80 percent of global carbon deposits — coal mines, oil fields, and shale gas sites — underground. Instead, you and your agencies have promoted every kind of mining and drilling here; you’ve even set up a special bureau at the State Department to push fracking overseas.

Much of this you could not realistically have prevented. Little of the Bakken Shale in North Dakota lay under federal land, for instance; clearly Congress was not about to help you regulate its development.

Here’s the checklist for your final 18 months

But earlier this year a team of scientists at Nature published a crucial paper explaining exactly which resources had to stay underground to prevent the globe from warming past the 2 degree Celsius limit you set in Copenhagen. Their work reads like a to-do list for the last 18 months of your administration.

None of this is special pleading — it’s just math. Liberate that carbon and the temperature climbs. Given what we know now about climate change, you have every right to draw the line in these places — and more, you have all the power. None of these are places where Congress can force your hand; at least for the course of your presidency, you can keep that carbon stored safely away. And in so doing you’ll help set the kind of precedent that might move the rest of the world. Already other power players are starting to recognize the future: from the Norwegian sovereign wealth fund to France’s largest insurer to Oxford to Georgetown to, yes, the University of Hawaii, responsible institutions are lining up to divest from fossil fuels. If you begin to strand some carbon beneath the earth, the wisdom of investing instead in renewable energy will become even clearer.

And it’s with that renewable energy that you can make your final mark on this debate. Solar power is a very different animal from when you came to office: a panel costs 75 percent less today. It’s gone from being a necessary change to a completely possible change, and though you’ve waited too long to be the politician who really exploits that fact, you can make sure that everyone in America at least knows about the new economics. (That’s why we were so hopeful that you’d put solar panels on the White House roof, so sorry it took you two years longer than promised, and so perplexed that you made so little out of it when it finally happened.)

People in D.C. stay snakebit by things too long: Solyndra is long-forgotten outside the Beltway, and every poll shows Americans of all political stripes love solar panels. Heck, there’s a left-right Green Tea coalition pushing for progress in the Southeast. We need you pounding the bully panel, not on the stump but on the roof, day after day — reminding everyone that far more people work in solar than in mining coal.

Just maybe, you also could take that new vision and use it to make the climate talks in Paris more than they’ll otherwise be. At the moment they look set to ratify a global temperature increase of 3 or 4 degrees C — that is, to lock us into a kind of slow-motion guaranteed catastrophe. They lack a vision beyond the mediocre (and unenforceable) targets that countries are now producing. But given the changed economics of sun and wind, the talks could be the moment when the world commits to electrifying every house on Earth with a solar panel on the roof. That’s now not only possible, it’s a practical and a moral imperative.

The sad part of this battle, for all of us, is that physics doesn’t really care about political realities — about how tough Congress has been, or for that matter how burned out and tired some of the rest us can get. Physics just cares about carbon. Reality reality trumps political reality. You alone know whether you’ve given this greatest of human crises everything you’ve got, but the rest of us hope there’s something left in your arsenal for these last 18 months.