Not up for debate: It's time to ask Trump and Biden some serious questions on climate. 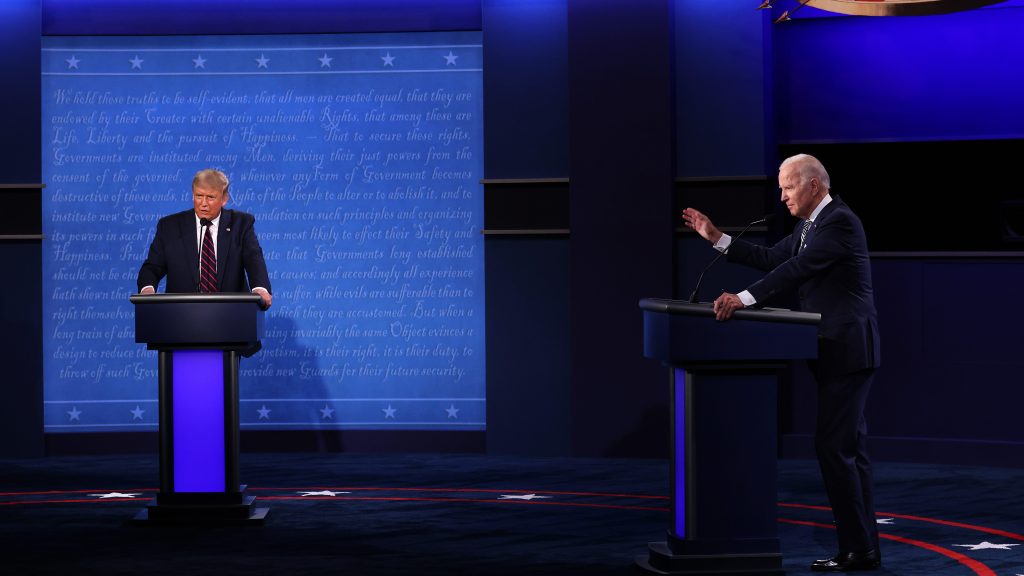 After a total shutout of the topic of climate change throughout the 2016 presidential and vice-presidential debates, moderator Chris Wallace asked President Trump and former Vice President Joe Biden for their positions on the issue in their first tilt last month. A week later, Susan Page followed suit in the vice-presidential matchup between current veep Mike Pence and Senator Kamala Harris.

In 2020, when the only debate worth having is over the fastest way for the United States to get to zero – or at least net-zero — greenhouse gas emissions, the debates were stuck in a time warp. Even though three-decade-old reports by the Intergovernmental Panel on Climate Change concluded that human activities were “substantially increasing” greenhouse gases,” Wallace and Page’s queries actually allowed for candidates to posit that global warming didn’t exist at all.

The question formulations allowed both Trump and Pence to filibuster that fighting climate change means crushing jobs and the American economy. Pence also added, “President Trump has made it clear that we’re going to continue to listen to the science.”

Of course, the record shows otherwise. The Trump administration has spent its entire term driving scientists out of the Environmental Protection Agency. It has packed the agency’s Science Advisory Board with consultants who abetted industries in their attempts to discredit research on the harmfulness of their products. And the administration’s fiscal year 2021 budget calls for the EPA staffing to be slashed to its lowest number in 35 years.

The recent debates stand in contrast to the Democratic primaries, where belief in climate change was a given among the more than two dozen candidates. Instead, there was healthy jousting about green jobs and infrastructure, eliminating fossil fuel subsidies, and how to engage China and India in curbing their emissions. And environmental justice for low-income communities and neighborhoods of color — which are disproportionately exposed to toxic pollution and the effects of climate change — rose from obscure activist jargon to a policy linchpin for the top candidates.

With little of substance coming from Republican counterparts on the fall debate stage, the Democratic challengers played it safe – so safe they risked sidestepping science themselves to shy away from policy positions they fear will sour swing-state voters.

Biden, for instance, threw the Green New Deal proposed by party progressives under the bus — despite the former vice president’s website plainly saying: “Biden believes the Green New Deal is a crucial framework for meeting the climate challenges we face.” The bold idea was conceived in response to scientists sounding the alarm in 2018 that the world had only 12 years to start meaningfully getting its emissions under control to keep warming under 2 degrees C (3.6 degrees F). With global efforts still stalled, and President Trump pulling the U.S. out of the Paris climate accords, projections of disaster have only increased. A prior prediction that sea-level rise could affect as many as 80 million people was increased last year to 300 million. A third of the world’s population is already living with the risk of deadly heatwaves. Half to three-quarters of people will contend with deadly heat at some point of the year by 2100 depending on what we do today.

Playing it safe also meant Biden and Harris were relatively bullish on natural gas. Maybe a little too bullish. Cleaner burning than coal or oil, gas was once was viewed by environmental groups as a tolerable transitional fossil fuel to a future powered by renewable energies. But as fracking gets at more and more previously inaccessible reserves, methane emissions are now on track to push the Earth’s atmosphere to warm between 3 and 4 degrees C (5.4 and 7.2 degrees F) by the end of this century. In a July commentary in Scientific American several authors of the latest studies regarding methane’s contribution to warming wrote, “In many ways we’re even further from reducing methane emissions than we are for carbon dioxide.”

Perhaps a bit cowed by the enduring currency of the conservative mantra that curbing climate change crushes jobs — and hypersensitive to the 32,000 fracking jobs in the critical swing state of Pennsylvania — the Biden/Harris ticket has said little about the emerging data. When Pence went after Harris by pointing out that in the primaries. she had supported a fracking ban, the California senator responded: “Joe Biden will not ban fracking. That is a fact. That is a fact.”

In fact, Biden can’t ban fracking; 90 percent of it is done on private and state land. So the exchange served as just another example of the debates doing the public a disservice on climate issues.

There is, however, one last chance to properly serve an audience of tens of millions before Election Day: the final presidential debate on Thursday. Moderator Kristen Welker of NBC News listed climate change as one of the key topics of discussion. Rather than asking the candidates what they believe, a fresh way she could connect voters directly to the topic is to ask questions connecting climate change to environmental injustice. After all, the topic touches on virtually all the other debate issues: “American families,” “Fighting COVID-19.” “Race in America,” “National Security,” and “Leadership.”

“Mr. President, you have denied that systemic racism exists. It is established fact, however, that because of historical and ongoing patterns of housing discrimination, Black and Latino communities are more likely to live next to fossil fuel facilities and suffer higher rates of asthma. Your own EPA says that rolling back the Obama Clean Power Plan might cost 1,400 lives a year. The previous administration estimated its rules would have saved 3,600 lives. Over 10 years, that adds up to 50,000 lives, enough to fill most baseball stadiums. How does your rollback not exacerbate those inequities, which are also tied to lost days attending school or work and higher COVID-19 death rates?”

A follow-up could be:

“President Trump, from inadequate housing or access to air conditioning amid extreme heat to experiencing difficulty when recovering from hurricanes and floods, low-income people and people of color living in U.S. cities suffer disproportionately from the worst weather effects of climate change. If you believe that taking action on climate change is not economically feasible, how are you going to protect these populations?”

To Biden, Welker could ask:

“Mr. Vice President, you and running mate Kamala Harris say you’re not going to ban fracking. But as the practice unlocks unprecedented levels of natural gas, scientists are now sounding the alarm that the U.S. is way over its methane budget, which will keep us from doing our part to keep the average temperatures under levels that avoid the most catastrophic effects to our planet and people. Further, a study by the NAACP found that over one million Black people live in counties with elevated cancer risk because of natural gas infrastructure. Why shouldn’t we be trying to eliminate fracking as fast as we can?”

She could follow-up with:

“You said in the first debate that you are not in favor of the Green New Deal. Yet your campaign literature calls it a ‘crucial framework’ for your climate agenda. Your running mate and chairs of the Congressional Black Caucus, Hispanic Congressional Caucus, and the Native American Caucus are all signatories to the resolution. Why are they wrong, and why are you right?”

On the topic of “national security,” Welker could ask both men:

“Mr. President and Mr. Vice President, every candidate for the White House promises a strong national defense to keep Americans secure from enemies abroad. But in many cases, our military harms its own soldiers and their families on bases, particularly pregnant mothers — as well as fellow citizens in nearby communities — with carcinogenic drinking water pollution from cleaning solvents, fire retardants, and munitions. More than 100 Superfund sites are military-related. What are your plans to ensure a strong military that is environmentally safe and just at home?

And again to both men, she could close with:

“Mr. President and Mr. Vice President. The late South African president and freedom fighter Nelson Mandela once told Oprah Winfrey, ‘If you want the cooperation of humans around you, you must make them feel they are important—and you do that by being genuine and humble.’ Imagine that you are talking to residents of majority-Black Flint, Michigan, who are still drinking bottled water six years after the beginning of their lead-contamination crisis. Imagine that you are speaking to parents in Philadelphia who send their children to schools with crumbling asbestos-laden pipes. How would you, as the leader of the so-called free world, make them feel important?”

Such a question would end the shutout on meaningful climate change-related discussion. And the answer might reveal — through the lens of climate and environmental justice — how genuine and humble the next president of the United States will be.