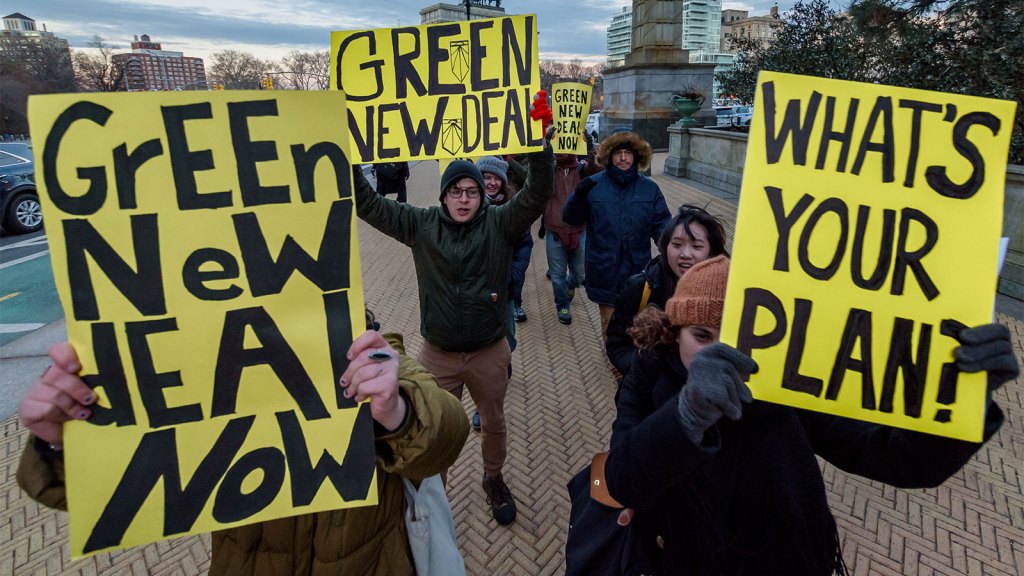 Three months ago, Democratic presidential nominee Joe Biden stood before cameras in Wilmington, Delaware, and promised to take the biggest, most sweeping measures to fight climate change ever seen in the United States. He would spend $2 trillion on boosting renewables and energy efficiency. He would completely eliminate carbon dioxide emissions from the electricity sector. It was, according to one writer, a promise to implement the Green New Deal — “minus the crazy.”

But now, even though Biden won the seemingly never-ending presidential election, those hopes have been dashed. After losing tight, high-profile Senate races in Montana, Maine, and Iowa, the Democratic party currently holds 48 seats. And they may not get any more. The only remaining seats up for grabs are in North Carolina — where the Democratic candidate, Cal Cunningham, is lagging behind after a sexting scandal — Alaska, and Georgia. (The Georgia Senate seats will likely go to a runoff in January, but Democrats would have to win both seats if, as expected, they lose in Alaska and North Carolina.)

“It’s hard to overstate how important the Senate is to Biden’s plans,” said David Konisky, a political scientist at Indiana University. “So many of his big ideas and large initiatives simply have no future if there’s no legislation.”

Biden’s biggest idea, which has been praised in policy circles, is a federal requirement for utilities to get all of their energy from zero-emissions sources — think wind, solar, and nuclear power — by 2035. If passed, such a law would cut 32 percent of U.S. greenhouse gas emissions in 15 years and put the country on a path to fulfilling its obligations under the Paris Agreement. (The U.S. exited the agreement on Wednesday, but Biden has promised to immediately rejoin.)

With Republicans in control of the Senate, however, that ambitious law would be virtually impossible to pass. If Congress managed to pass any kind of clean energy standard, “it would have to be pretty weak,” said Parrish Bergquist, professor of public policy at Georgetown University. It might even include carve-outs for fossil-fuel industries.

Biden’s plan to spend a whopping $2 trillion on clean energy and other climate-friendly initiatives may be dead on arrival. Konisky says that some of those projects — funding for research on wind and solar power, for example, or sealing up drafty homes to save energy — could be shoehorned into a future COVID-19 stimulus package. But it would all happen on a much, much smaller scale.

“We’re certainly in the hundreds of billions of dollars as a ceiling, as opposed to thinking about 2 or 3 trillion dollars,” Konisky said. “That’s my ‘guesstimate’ at this stage.” President Obama, it should be remembered, had a Democratic House and Senate when he took office — and only managed to get $90 billion of clean energy spending into the 2009 Recovery Act.

With Biden in the White House, Senate Republicans may also revert to their old “deficit dove” stances, refusing to pass any big spending that adds to the national debt. (This year, the U.S. budget deficit is expected to reach $3.1 trillion, due in large part to an explosion of spending during the coronavirus pandemic.)

Still, Biden can do a lot without the Senate’s help. He will almost certainly rejoin the Paris Agreement, set stricter standards for gas mileage on vehicles, and begin reinstating the dozens of environmental rules President Trump dismantled. But the really big stuff — the measures that would help the U.S. cut emissions to zero — may be off the table.

“It puts me in this really existential place,” Bergquist said. “It seems that we cannot solve the climate crisis in the American political system as it stands.”

Four years ago, when President Trump won the presidency, climate activists went through a similar reckoning. Leaving behind hopes to influence federal policy, environmental groups turned to states, cities, and corporations. They created the #WeAreStillIn movement, a big coalition that’s trying to reach the goals of the Paris Agreement even without presidential support. Those initiatives are still ongoing, although there are limits to what they can accomplish. According to a recent study from the Brookings Institute, only 15 of the 100 biggest U.S. cities are actually on track to meet their climate targets. Half of them haven’t even made a plan to begin with.

Bergquist says that she is beginning to rethink some of the old understandings of how the country should address climate change. “For a long time, there’s been this assumption that we have to have federal climate policy to solve the climate crisis,” she said. “I’m so convinced that’s true — but I’m also wondering if we need to question it.”

Over the next few months, many climate activists may do the same thing — and they’ll have to deal with some of the divisions that may emerge as plans to address the overheating planet get toned down. “The environmental community has worked really hard to unite around climate change, and to create a united platform,” Konisky said. “I wonder if that is going to fray.”