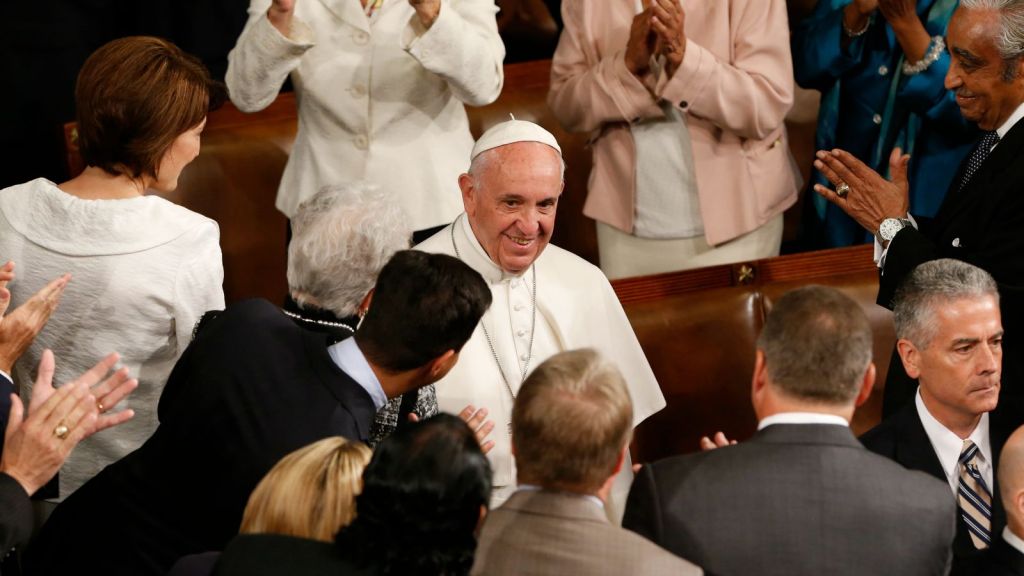 In the run-up to Pope Francis’ address to Congress today, there was a lot of speculation about how his climate change message would play in a chamber where action on climate often goes to die. Most of the pontiff’s positions on global warming are not popular with Republican members of Congress — especially the fact that it exists, and that humans are causing it.

We got a bit of a preview during the pope’s speech yesterday at the White House, where he laid out his typically forceful message on the need to fight global warming. He even favorably mentioned President Barack Obama’s new restrictions on power plant emissions:

Mr. President, I find it encouraging that you are proposing an initiative for reducing air pollution. (Applause.) Accepting the urgency, it seems clear to me also that climate change is a problem which can no longer be left to our future generation. (Applause.) When it comes to the care of our common home, we are living at a critical moment of history. We still have time to make the change needed to bring about a sustainable and integral development, for we know that things can change. (Applause.)

But the pope’s speech to Congress this morning laid out a considerably softer message on climate. He cited his landmark encyclical on climate, “Laudato Si,” but he didn’t use the phrase “climate change” at all.

It goes without saying that part of this great effort is the creation and distribution of wealth. The right use of natural resources, the proper application of technology, and the harnessing of the spirit of enterprise are essential elements of an economy which seeks to be modern, inclusive, and sustainable. “Business is a noble vocation, directed to producing wealth and improving the world. It can be a fruitful source of prosperity for the area in which it operates, especially if it sees the creation of jobs as an essential part of its service to the common good” (“Laudato Si,” 129). This common good also includes the earth, a central theme of the encyclical which I recently wrote in order to “enter into dialogue with all people about our common home” (ibid., 3). “We need a conversation which includes everyone, since the environmental challenge we are undergoing, and its human roots, concern and affect us all” (ibid., 14).

In “Laudato Si,” I call for a courageous and responsible effort to “redirect our steps” (ibid., 61), and to avert the most serious effects of the environmental deterioration caused by human activity. I am convinced that we can make a difference and I have no doubt that the United States — and this Congress — have an important role to play. Now is the time for courageous actions and strategies, aimed at implementing a “culture of care” (ibid., 231) and “an integrated approach to combating poverty, restoring dignity to the excluded, and at the same time, protecting nature” (ibid., 139). “We have the freedom needed to limit and direct technology” (ibid., 112); “to devise intelligent ways of … developing and limiting our power” (ibid., 78); and to put technology “at the service of another type of progress, one which is healthier, more human, more social, more integral” (ibid., 112). In this regard, I am confident that America’s outstanding academic and research institutions can make a vital contribution in the years ahead.

The message today is much softer, much less direct. Perhaps Pope Francis didn’t want to tread too heavily on the message in a room that wouldn’t be receptive to it.