Republican candidates are obsessed with bacon 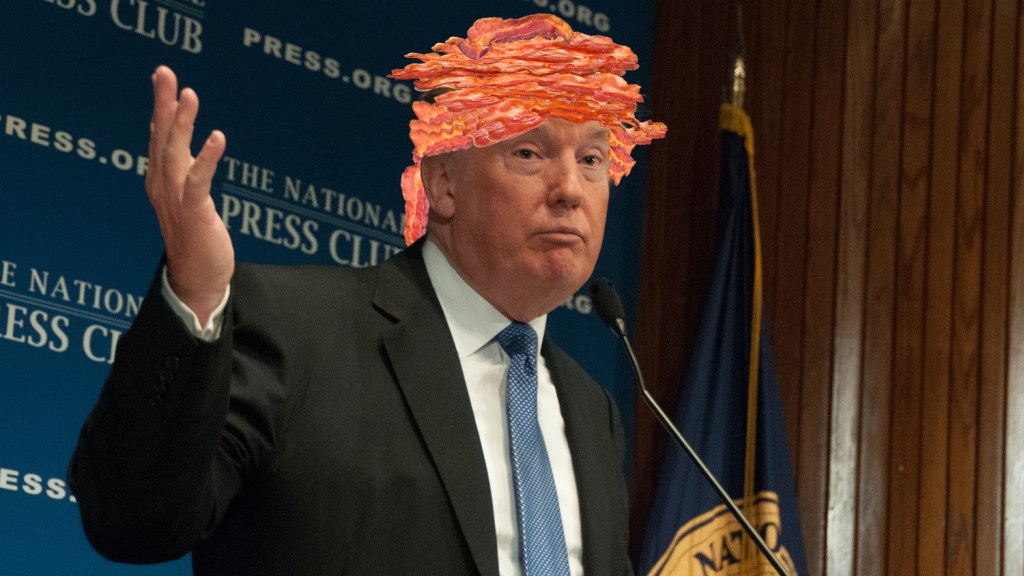 Grist / Shutterstock
From the pork barrel

Republican candidates are obsessed with bacon

The Republican presidential candidates — you know, that off-white gelatinous horde that reminds you of a live-action, meth-addled cast of SpongeBob — has a weird bacon obsession. And not of the Kevin variety.

You might have seen Ted “We Need 100 More Senators Like Jesse Helms” Cruz flash-frying a strip of the stuff on the barrel of an AR-15 last month. No? Well, here you go:

Recall that this is a man who’s running for commander-in-chief. But that rifle stunt was only the beginning.

This week, John Kasich — the same John Kasich who told a black Ohio state senator, “I don’t need your people,” when she offered to help him build a racially diverse gubernatorial cabinet — debuted a Snapchat geofilter that rendered his campaign logo as a flappy bacon flag:

Because, you know, when your logo already looks like a flappy bacon flag, you might as well embrace it.

Then there’s Bobby Jindal, who fired off a greasy tweet last month showing off the bacon drawer at the Louisiana governor’s mansion:

(Rumor has it the drawer below is where he keeps the human skin he applies over his robotic torso each morning.)

Of course, I would be remiss if I didn’t bring you back to July 2013, when Rand Paul referred to Chris Christie as the “king of bacon.”

And then there’s Jeb, who a couple of weeks ago tweeted out a photo of himself manning a bacon grill in Iowa:

“Be inspired. Be bacon,” tweeted the enigmatic caveman.

Discussing the Snapchat filter with TIME, a Kasich campaign spokesperson asked, “Who doesn’t love bacon?” We’ll venture a guess: for starters, many of the United States’ 5.4 million Jews and 2.8 million Muslims, plus the 5 million or so vegetarians and vegans.

So why bacon? Why now? Are the GOP candidates trying to foreground bacon instead of the party’s usual anti-black, anti-woman, anti-poor agenda? Is it an overly clever ploy at sneaking in some inscrutable pork barrel commentary? Is it a diversionary tactic to pull attention from the all-consuming hate tornado that is The Donald?

And where is Trump in all of this, anyway? You’d think the guy that calls women “fat pigs” would hold strong views on actual pork products.