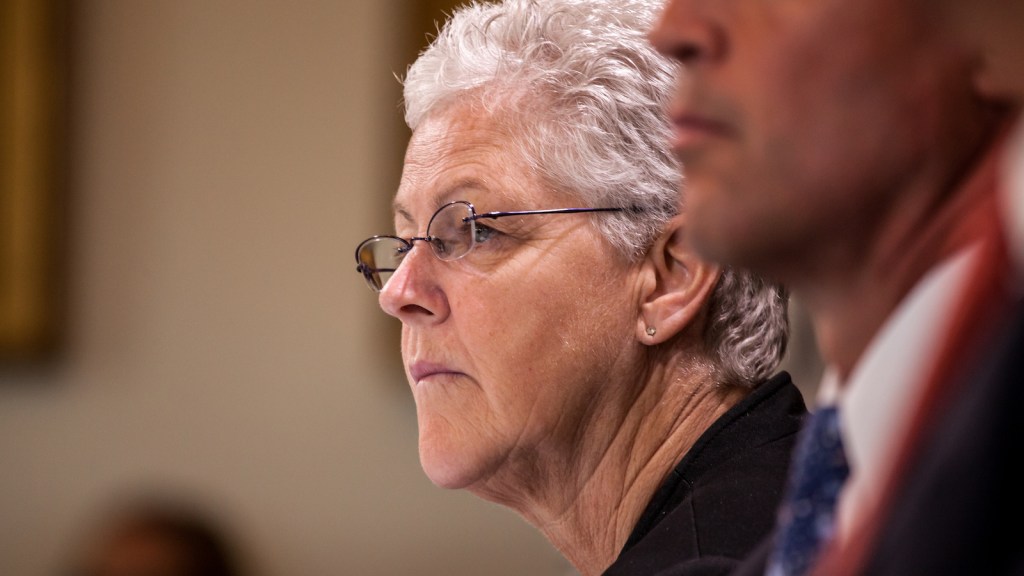 Finger-pointing was the name of the game during a congressional oversight committee hearing on Thursday that, in theory, was meant to hone in on which level of government was at fault in Flint, Michigan’s public health emergency. After hearing from the two star witnesses, Michigan Gov. Rick Snyder (R) and Environmental Protection Agency Administrator Gina McCarthy, the answer appears to be (spoiler alert) all of them are to blame.

Lower-level officials both in the EPA and Snyder administration have already resigned over the mishandling of Flint’s water crisis, including former EPA midwestern regional head Susan Hedman and Michigan Department of Environmental Quality Director Dan Wyant. But politicians’ calls for officials higher up the chain — as high as Snyder and the head of the EPA — to resign reached a fever pitch on Thursday. Democratic lawmakers repeatedly called for his resignation after his administration’s spectacular failures in Flint. Republican lawmakers also ramped up the pressure on McCarthy throughout the long-anticipated, frequently terse House Committee on Oversight and Government Regulation hearing on the Flint water crisis.

“If you want to do the courageous thing, like you said Susan Hedman did, then you, too, should resign,” House Oversight Chair Rep. Jason Chaffetz (R-Utah) told McCarthy, his voice rising during a heated exchange in which he frequently cut off the EPA head’s attempts to explain state-level restrictions to EPA action.

During a particularly tense exchange between Chaffetz and McCarthy, the committee chair grew frustrated with McCarthy, saying that she had the ultimate power to do something about Flint. “So why do we even need an EPA?” Chaffetz asked.

Usually Republicans say that to suggest that the EPA isn’t necessary, and that the EPA only exists to burden businesses and its responsibilities should be handed to the states. Today, Chaffetz made a rare case that the EPA failed Flint because it didn’t do more than the law required of the agency.

But Chaffetz still had a point about the EPA’s failure to act — an irony wasn’t lost on some Democrats. “Republicans have been slamming the EPA for overreaching at every possible turn, then they criticize the EPA for not doing more when Governor Snyder fell down on the job,” Rep. William Lacy Clay (D-Mo.) said.

Flint’s lead problems began in April 2014 when a Snyder-appointed emergency manager switched the city’s water supply from Detroit — sourced from the Great Lakes — to Flint River, historically a highly polluted industrial dumping ground. City and state officials assured residents the water was safe to drink until last fall. Though EPA water expert Miguel Del Toral noted as early as February 2015 that Flint’s water supply was no longer being treated for lead and that the tests showing the water was safe were inaccurate, it wasn’t until November that the EPA shared that information with the public, though the agency privately expressed concerns to Michigan officials in the interim months.

Though Snyder and McCarthy at times found themselves attacked from both sides of the aisle (“I am not on your side,” Democratic Rep. Tammy Duckworth told McCarthy), most lawmakers hewed to party lines. Congressional Republicans chose not to focus on Snyder when he apologized for his administration’s failures but cast primary blame on “career bureaucrats.” McCarthy, for her part, stuck firmly to the line that her agency was blocked, repeatedly, by the state government. “I wish we had gone further, I wish we had gone farther, I wish we had yelled from the treetops,” McCarthy said. “But there is no way that my agency created this problem, or there was ambiguity in the existing law that wouldn’t’ve done the same thing that the governor said, which was let them know, use your common sense, don’t put people at risk.”

According to published emails on the administration’s response to Flint, the EPA and Snyder administration were locked in a debate over state officials’ misreading of the federal lead and copper rule, with the state insisting that the water did not need certain chemical treatments when it switched water supply. It was the state’s responsibility to follow the rule, and the EPA’s to ensure Michigan followed it correctly.