In Sunday night’s presidential debate, both Democratic candidates came out swinging against the controversial technique for extracting oil and natural gas. Sanders was blunt. “No, I do not support fracking,” he said. Clinton was a bit less direct. She said that she would hold fracking operations to such high standards that “by the time we get through all of my conditions, I do not think there will be many places in America where fracking will continue to take place.” (You can watch their responses above.)

While Sanders’ statement basically matched what he has said before, Clinton’s appeared to be something of a shift from her earlier positions. As secretary of state, she backed a push to get fracking operations up and running in foreign countries and called natural gas “the cleanest fossil fuel available for power generation today.”

Now, it appears that either Democrat could try to curtail fracking substantially.

Many environmentalists would celebrate that, but some experts are warning that when it comes to climate change, limiting fracking could backfire. To understand why, you need to know a bit of background about the complex scientific debate surrounding the issue.

Environmental activists have criticized fracking for possibly contaminating subterranean water supplies, polluting air in communities near drilling sites, and contributing to climate change. They point out that methane, the main component of natural gas, is a greenhouse gas that is up to 90 times more powerful than carbon dioxide in the short term if it leaks into the air without being burned (though it lingers in the atmosphere for much less time than CO2).

When natural gas is burned in power plants, it produces far less CO2 than coal does. But methane leaks occur at nearly every step of the natural gas production process — from well to pipeline to storage. Right now, there’s a raging debate among scientists over whether the methane leaks from the natural gas system or the huge carbon dioxide emissions from coal are ultimately worse for global warming.

In Sunday’s debate, Clinton said that fixing the methane leaks would be a precondition for her to support fracking. Clinton and Sanders have both proposed new regulations on methane leaks that build on rules currently being formulated by the Obama administration. But both candidates say they want to go beyond simply fixing methane leaks and are actually promising to eliminate most fracking.

Here’s the problem: There’s a good chance that efforts to restrict fracking could lead to the burning of more coal. About 90 percent of the natural gas used in the United States is produced domestically, according to federal statistics; more than half of that is produced by fracking. The fracking boom has resulted in cheap gas replacing coal as the chief power source in many parts of the country. Gas now accounts for about one-third of U.S. electricity production, up from around 23 percent when Obama took office. That growth has been matched by a decline in coal consumption.

At the same time, the country has seen a steady reduction in greenhouse gas emissions per unit of GDP, an indication that the economy is becoming cleaner. The rapid growth of solar, wind, and other renewables is one important factor behind that trend, as are widespread improvements to energy efficiency. But the swapping of natural gas for coal has been arguably the most vital — note how the falling blue line (coal) mirrors the rising green line (gas): 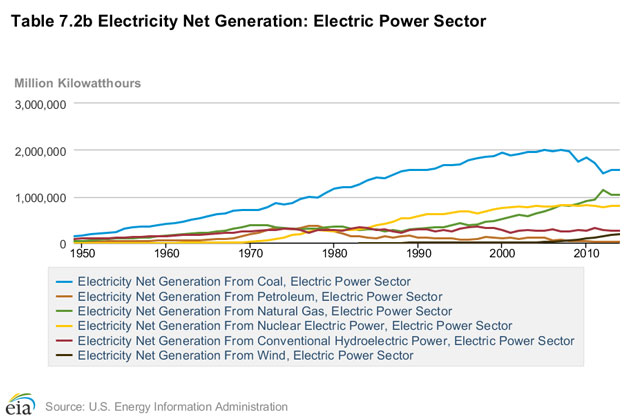 “Without natural gas, it would have been very difficult to achieve the emissions reductions from retiring coal plants that occurred over the last decade,” said Rob Barnett, a senior energy analyst at Bloomberg Intelligence. “Few politicians would want to turn the dial back on natural gas, if it meant we started burning more coal in exchange.”

In other words, some analysts said, if Clinton and Sanders are committed to confronting climate change, choking off the country’s supply of natural gas could be a big step in the wrong direction. That’s especially true if the drawdown of fracking isn’t paired with new policies aimed specifically at preventing a reversion to coal. Sanders has called for a national carbon tax, and both candidates have supported various incentives for renewables. But a carbon tax is unlikely to pass Congress, renewables are under siege in many states, and Obama’s plan to reduce coal consumption was recently put on hold by the Supreme Court.

“In the present legislative and regulatory environment, any severe curtailing of natural gas fracking would just lead to a bounce back of coal, not an expansion of renewables,” said Ray Pierrehumbert, a geophysicist at the University of Chicago. “A strong carbon tax or strong support for renewables and efficiency could possibly allow fracking to be phased out without causing a bounce back in coal, but that’s not the situation we are facing in the U.S.”

Not everyone agrees with that assessment. Coal is ultimately in a death spiral regardless of what happens with fracking, says Mark Brownstein, vice president of climate programs at the Environmental Defense Fund, a group that generally supports replacing coal with gas.

“Any way you slice it, you have old, inefficient, highly polluting coal-fired power plants in the U.S., and there are all sorts of economic and political and environmental factors that bear down on them irrespective of the price of natural gas,” he said. “The simple possibility of gas prices rising doesn’t change the fundamental pressure on coal.”

Fracking faces economic pressures of its own, unrelated to regulation of methane leaks or water contamination. The boom in oil and gas production is starting to come full circle, as the saturated market drives down prices, which in turn drives down production. In 2015, gas production dipped for the first time in years; the same crash happened in oil production in response to record-low global oil prices. In other words, the fracking industry is already contracting without any help from Sanders or Clinton.

And for what it’s worth, the candidates’ threats could be kind of toothless anyway, Barnett said.

“It’s unlikely the president has the authority to impose a national ban on fracking without new legislation from Congress,” he said. “And Congress simply isn’t likely to play along.”