Sen. Landrieu doesn't need your love. Big Oil's got her back. 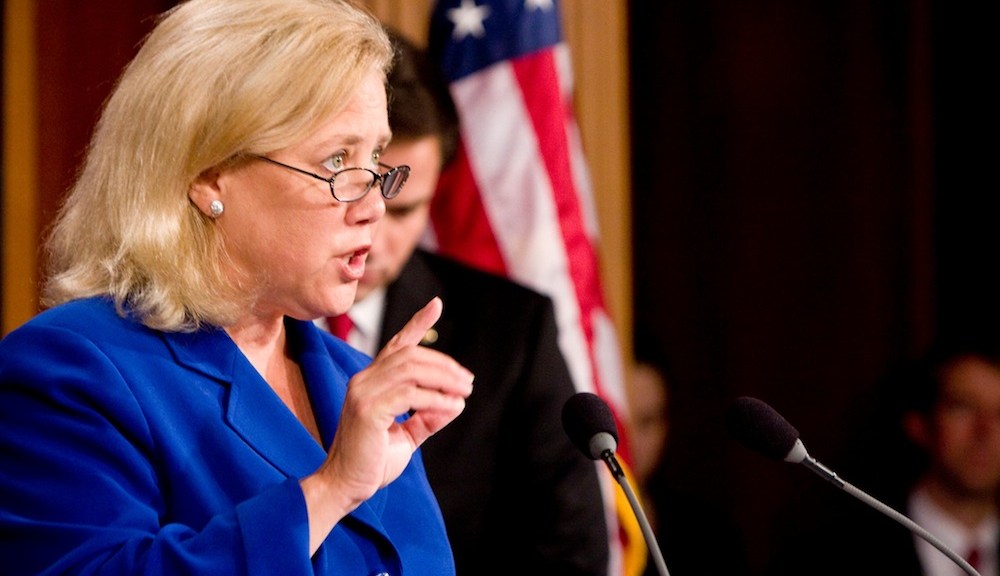 Sen. Landrieu doesn’t need your love. Big Oil’s got her back.

You might expect the Democratic chair of the Senate Energy and Commerce Committee to be an ally of the environmental movement. After all, her committee has jurisdiction over federal policies on energy and nuclear waste, among other things. Facing a tough reelection fight, her friends in the nation’s leading environmental organizations would rush to her defense, right?

Well, not if that chair is Mary Landrieu of Louisiana. As I explained in December — when it became apparent that Sen. Ron Wyden (D-Ore.) would be moving from Energy to chair the Finance Committee, with Landrieu replacing him — Landrieu is no tree-hugger. She’s more into drilling rigs and gas pipelines:

In 2011, she voted in favor of an amendment sponsored by Senate Minority Leader Mitch McConnell (R-Ky.) to reverse the EPA’s decision to label CO2 a pollutant under the Clean Air Act… She voted against the Close Big Oil Tax Loopholes Act, introduced by Sen. Robert Menendez (D-N.J.)… She voted for an amendment to the 2012 transportation bill that would have opened up vast areas of coastline to offshore drilling, potentially damaging coastal industries and interfering with military activity.

When 31 senators took the floor for an all-night talk-a-thon about climate change earlier this month, Landrieu was notably absent. (Republicans criticized her anyway for not being sufficiently subservient to the oil and gas industries.) Landrieu also led the successful recent effort to undo flood insurance reform. Now, your tax dollars will once again be used to subsidize beachfront homes being constantly rebuilt in harm’s way.

The senator’s love for fossil fuels makes sense, in a way: Oil and gas drilling is a big part of Louisiana’s economy.

But now, environmentalists are trying to punish Landrieu, who is up for reelection this November. National Journal reported on Sunday that Landrieu has only gotten $2,500 from the environmental community, from one local group, the Baton Rouge-based Center for Coastal Conservation. The national green groups are shunning her.

But don’t worry about Landrieu. Her friends in the fossil fuel industry are eagerly rewarding her years of loyal service. This from NJ:

According to the Center for Responsive Politics, Landrieu’s campaign has so far raised close to $9.5 million with a cool $564,350 coming from the oil and gas industry. Landrieu is an oil- and gas-industry champion who tiptoes around the global-warming debate and voted to block the Obama administration’s climate rules for power plants. Lining up behind a candidate like that, environmental groups fear, would signal to Democrats that their support is unconditional—and that greens can be taken for granted.

The irony is that holding Landrieu’s seat will probably be essential for Democrats to retain their majority in the Senate. If you think Landrieu is bad, you’ve never seen Rep. Bill Cassidy, the Republican from Louisiana who would replace her, and Lisa Murkowski, the Republican who would become chair of the Energy Committee if Republicans took over the Senate. While Landrieu’s lifetime rating from the League of Conservation Voters (LCV) is an underwhelming 49 percent, Cassidy’s is an anemic 11 percent, and Murkowski’s is 21 percent.

The best outcome for environmentalists would be to hold the Senate while Landrieu loses, so that her chairmanship could be taken over by a more pro-environment Democrat such as Maria Cantwell of Washington. But with Democrats facing possible losses of their seats in other red and purple states such as Arkansas, Alaska, Iowa, and North Carolina, it would be a lot safer for them to just hope Landrieu wins.

Landrieu’s allegiances illustrate that the environment is more of a regionalized issue — less purely partisan and ideological — than many others. While every Senate Democrat is more liberal than the most liberal Senate Republican overall, Landrieu is more conservative than some Republicans are on the environment. Sen. Susan Collins, R-Maine, has a lifetime LCV score of 69 percent. The Environmental Defense Fund is running ads in Maine to support Collins.

No such help will be forthcoming for Landrieu. But with all the help she’s getting from the dirty energy industry, money won’t be her problem this fall.