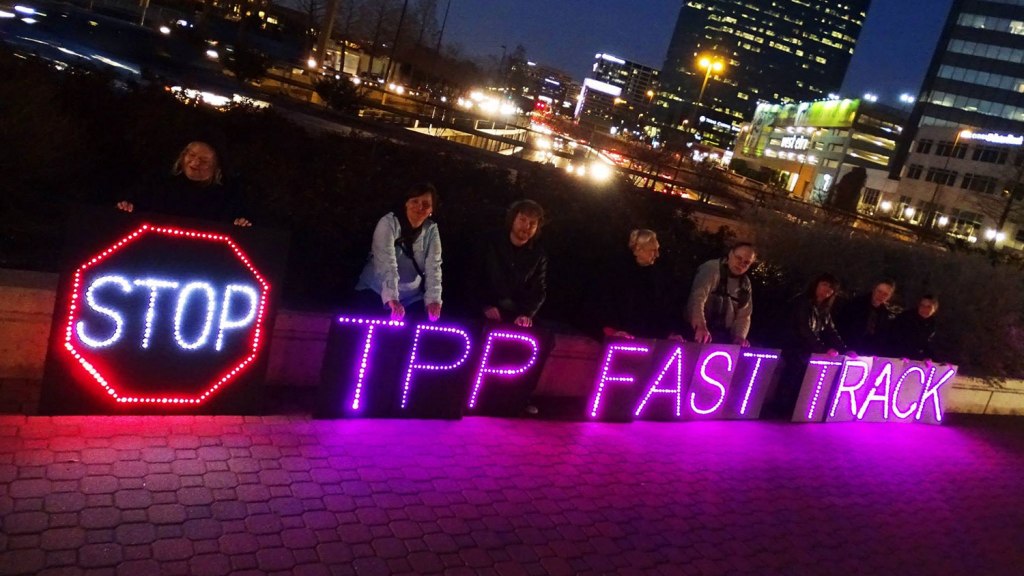 Environmental groups and a host of allies won a major victory on Friday when House Democrats derailed Obama’s “free trade” agenda — at least for now.

Through some congressional maneuvering, House Democrats threw a critical roadblock in front of a plan to give the president trade promotion authority (TPA) that he could use to push through the Trans-Pacific Partnership (TPP), a trade deal that many environmentalists, among others, are deeply skeptical about. (Look out for more acronyms below!) TPA would “fast track” the trade deal, constraining Congress to a “yes” or “no” vote on it and allowing Obama more leeway to negotiate what the deal would contain.

Both TPA and TPP have found favor with most Republicans, but they’ve also brought together a broad coalition in opposition. Tea Partiers who oppose Obama’s authority more or less on principle came together with a whole range of progressives. Many fear the TPP would send domestic jobs overseas — some progressives have called the deal “NAFTA on steroids.” Environmental groups say the agreement would also set back efforts at conservation, tackling climate change, and improving public health. The TPP is currently being negotiated in secret between the U.S. and nearly a dozen other countries along the Pacific Rim.

The Obama administration has been pushing hard for trade promotion authority and the TPP deal. The president himself even turned up to distribute White House–brewed beers and persuade legislators at a congressional baseball game yesterday where Democrats were playing Republicans. Republicans started chanting “TPA! TPA!” when Obama arrived. Yeah, this stuff actually happens. Obama also addressed House Democrats for 45 minutes this morning.

The administration has been saying that the TPP would give the United States the power to write the rules of international trade before China starts doing so. With the reins in America’s hands, the administration argues, globalization might be able to move forward in a manner that TPP’s opponents don’t find quite so odious.

But the opponents are not convinced. In a letter to Congress yesterday, 40 environmental groups urged rejection of the “fast track” TPA bill. “A new model of trade that delivers benefits for most Americans, promotes broadly shared prosperity, and safeguards the environment and public health is possible. To achieve such goals, however, fast track must be replaced with a new system for negotiating and implementing trade agreements,” the letter read. Many of the signatories on yesterday’s letter signed another one, back in April, with 2,000 other groups who opposed fast track authority.

As for the TPP trade deal itself, environmental groups oppose many of the provisions that are rumored to be in it, including ones that would allow foreign corporations to sue governments over their environmental and public health policies. And then there’s the principle of transparency: “After more than five years of negotiation, we still have to rely on WikiLeaks for our information,” Ilana Solomon of the Sierra Club’s Responsible Trade Program told The Guardian.

When it came time for the vote today, Democrats, by a 3-to-1 margin, voted against a provision to provide aid for workers who lose their jobs as a result of trade deals. Though Democrats supported the specific provision, called Trade Adjustment Assistance (TAA — another acronym!), they chose to vote it down in order to scuttle the entire legislative process on fast track authority. At the last minute, House Minority Leader Nancy Pelosi (D-Calif.), who had not previously been clear about her position, told her follow House members that she would vote against TAA, and some undecided Democrats followed her lead.

Rep. Israel tells reporters Obama didn't sway anyone after meeting. It was Pelosi's opposition to TAA that sealed the deal for undecideds.

When the Senate passed its trade bill last month, it included both TPA and TAA. So if the House bill doesn’t also include TAA, then there’s no final version that can be sent to Obama’s desk. Still, even though the failure to pass TAA made a House vote on TPA a moot point, the Republican leadership decided to press ahead with the vote anyway. TPA passed 219 to 211, and Speaker John Boehner (R-Ohio) asked to bring TAA back up for a vote next week. If TAA passes then, today’s TPA vote will stand.

That means the TPA — “fast track authority” — isn’t quite dead yet. Obama has more time to twist arms in an attempt to get Democrats to do an about-face. But the president would have to change quite a lot of minds, so, for now, advocates are celebrating.

“This is a major victory for everyone who thinks trade should be fair and responsible,” the Sierra Club’s Michael Brune said in a statement. “The era of free trade deals that harm workers and the environment is coming to a close.”

Some of those celebrations are more cautious than others.

“Today’s victory, while important, is not decisive,” said Friends of the Earth President Erich Pica. “Friends of the Earth and others will remain vigilant to ensure that future efforts to pass Fast Track and climate-destroying trade agreements are defeated.”