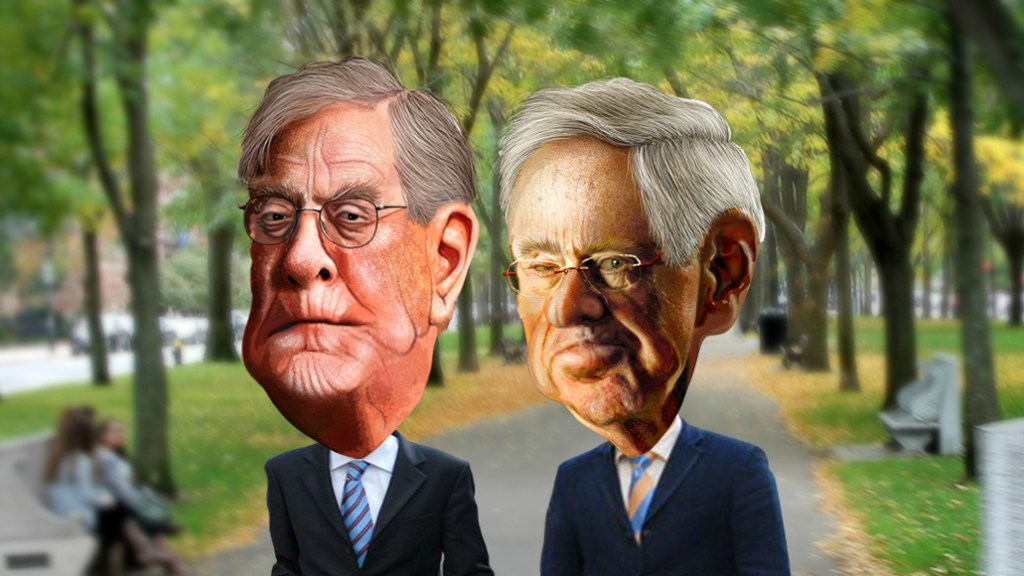 Charles and David Koch, the oil-baron brothers who’ve spent big to prevent climate action in America, are at work overseas as well. Over the last three years, their company has spent about $600,000 lobbying in the European Union.

Koch Industries’ entry in the European Transparency Register, a voluntary log maintained by the EU, was first spotted by DeSmogBlog UK. In the entry, Koch Industries said it has its eyes on “all initiatives in the areas of environmental protection, trade, and internal market, such as the recast of the fertilizer regulation, REACH [EU chemical regulation] and EU’s free trade agreement negotiations.”

Koch Industries operates a number of companies in Europe; they run the the gamut from manufacturing paper products and fertilizer to trading oil and natural gas. And during the same period that Koch Industries was becoming a major political player in the U.S., Koch’s European operations got their own lobbying operations. From DeSmogBlog:

In 2009, Koch Industries launched its European arm under its legal, lobbying and public affairs branch, known as Koch Companies Public Sector, LLC, in order to make discussions with local policymakers easier. Previously, they would send Koch representatives to Europe. Only in 2013 did Koch Companies sign up to the Transparency Register.

So far, the lobbying disclosure filing claims that the company has focused mostly on fertilizer regulations and free trade agreements. The World Wildlife Fund’s Jason Anderson notes that climate denial is far less likely to fly in Brussels than in the U.S. But even if the company isn’t outrightly crusading against climate action, it can exercise influence by seeking to tweak trade deals, Anderson says.

While companies that lobby the U.S. Congress are required to disclose that information (at least in theory), companies operating in the E.U. can decide whether or not to submit information about their lobbying to the the European Transparency Register. That means the register can be incomplete or inconsistent. Goldman Sachs, for instance, declared less than $55,000 in lobbying for 2013, but NGOs allege that the bank spent “significantly more than that paying others to lobby on its behalf during the same period.” DeSmog Blog suggests the same thing could be going on with Koch Industries in the E.U..

“Lobbyists can still choose if they want to be be transparent, and they can still appear in the register with totally misleading data,” said Nina Katzemich of the group LobbyControl, which put out a report earlier this year detailing flaws in the current system. “Without fundamental changes to the quality of the register, lobbyists can give a totally wrong impression of their lobbying activities and still get access to high level decision-makers.”

In the U.S., the Kochs have been innovative in shielding their political spending from scrutiny. Perhaps now that the news of Koch Industries’ European lobbying has come out, the company might decide it’s not so keen to voluntarily disclose its activities in Europe either.