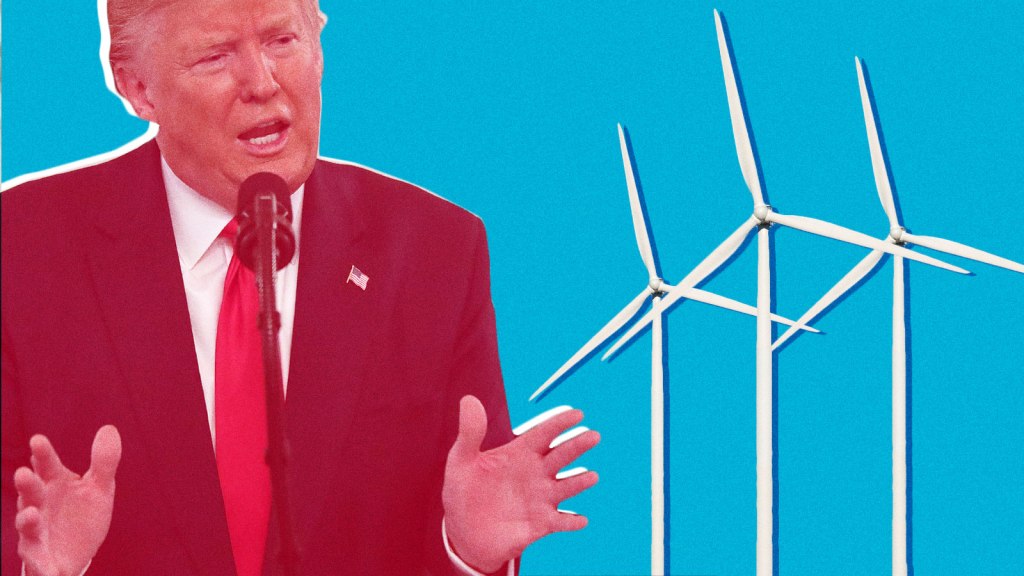 It’s no secret that President Trump hates wind turbines. He’s had it out for them since at least 2012, when he tweeted that they’re an “environmental & aesthetic disaster,” and blamed them for murdering bald eagles. The enmity reportedly stems from an offshore wind farm that Trump feared would mar views from one of his golf courses in Scotland.

At a rally in Colorado Springs, Colorado, on Thursday, Trump made his displeasure known again, saying that the wind turbines he saw recently on a trip to Palm Springs were “closed” and “rotting.” “They look like hell,” he said.

He didn’t stop there. “When they’re making them, more stuff goes up into the air and up into the ozone, the atmosphere,” Trump said. “And they don’t say this, but after a period of time, they get tired, they get old, they get rusty and a lot of guys say hey, their useful life is gone, let’s get the hell out of here.”

The president isn’t entirely wrong about that last bit. As a recent report from Bloomberg Green points out, tens of thousands of aging wind turbine blades — which can stretch longer than the wing of a Boeing 747 — are ending up in landfills. Over the next four years, 32,000 blades will go to the landfill in the United States alone. Recycling the blades, which are built to outlast hurricanes and tornadoes, is nigh impossible.

But the environmental impact of wind turbines is nothing compared to that of oil, gas, and coal — industries that Trump has tried to prop up with every executive lever available to him. If Trump actually cared about the stuff that “goes up into the air,” he’d rail against fossil fuels, not renewables. The carbon footprint of coal is nearly 90 times greater than that of wind energy, according to the Department of Energy’s National Renewable Energy Laboratory, an agency in the executive branch that Trump is the head of. The footprint of natural gas is more than 40 times greater.

Trump’s 2012 claim that wind turbines kill birds is also a half-truth: the Audubon Society estimates that wind turbines kill somewhere between 140,000 and 328,000 birds every year in North America. But the oil and gas industry kills as many as one million birds a year, says the Bureau of Land Management. And coal, the industry Trump has vowed to save, kills nearly 8 million per year.

Come to think of it, “a lot of guys say hey, their useful life is gone, let’s get the hell out of here” would be a much better motto for fossil fuels than for wind turbines.