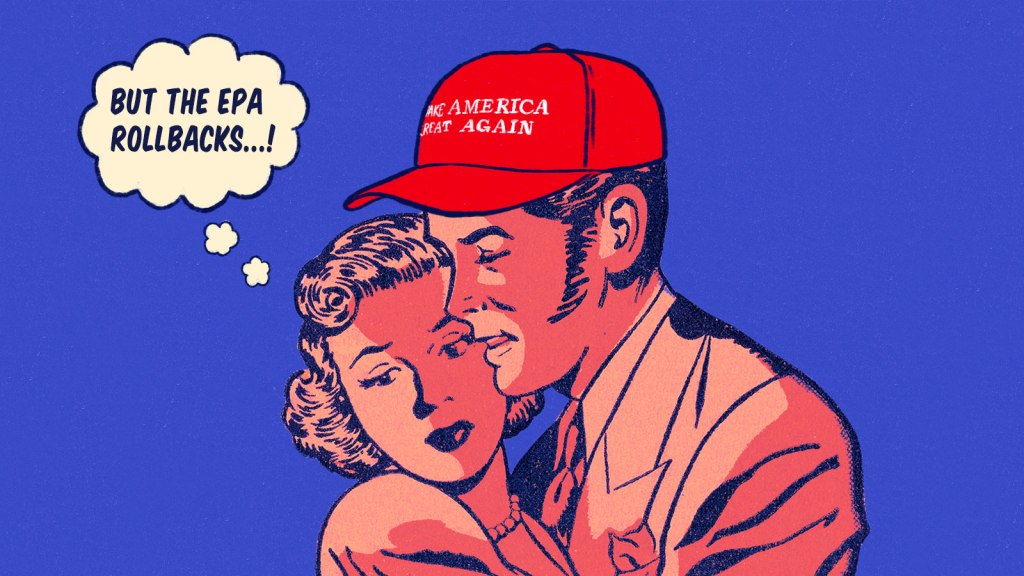 It may be hard to tell, but in between jabs at climate science, federal science agencies, and stalwart environmental regulations, President Trump has been trying to position himself as an environmentalist. The president’s efforts to green his image go back as far as 2017, when he told business leaders, and I quote, “I’m a very big person when it comes to the environment.” Do voters agree? New research shows they most certainly do not.

Swing voters in four key states — Florida, Pennsylvania, Iowa, and Michigan — are squarely opposed to Trump’s environmental rollbacks. That’s the takeaway from a set of focus groups of dozens of swing voters — defined as those who switched their presidential vote from Democratic to Republican, or vice versa, between 2012 and 2016 — run by a non-partisan research groups Engagious and Focus Pointe Global.

Unlike polls, the focus groups don’t reflect the opinions of a representative sample of likely voters. Instead, they give us a glimpse into the minds of voters whose preferences could determine who will sit in the Oval Office come January. The participants were asked to rate their support for Trump’s environmental rollbacks on a scale of 1 to 10 twice: before seeing a list of 17 policies he’s gutted and after. (Those 17 policies were pulled from a comprehensive list of rollbacks compiled by the New York Times.) The groups’ ratings averaged 4.5 before seeing the rollbacks and 3.2 after.

In Florida, a state that’s particularly aware of the consequences of rising temperatures and seas, the average dropped to 2.6 after seeing the rollbacks enumerated. “Before seeing that list of rollbacks, my hand would have been up 100 percent for Trump,” one Florida focus group participant and 2016 Trump supporter said. “After seeing it, my hand was not up. I’m not 100 percent sold on him.” Another participant asked why she supported Trump less after seeing the list of rollbacks, said she didn’t know about half of those rollbacks before seeing them. “To me, it made a difference to actually see them and process it,” she said. Another participant said she didn’t expect or want Trump to roll back those regulations, despite voting for him in 2016. “He’s supposed to be protecting our country and our world,” she said. “He’s supposed to be a world leader.”

Trump’s environmental rollbacks might not be enough to prompt these swing-state voters to choose a Democrat in the voting booth — that first Florida participant who said he’s not 100 percent sold on Trump said he’s still “80 percent sold on Trump just because of a lot of the other things he stands for.” But the focus group results do show that Trump’s rollbacks are supremely unpopular with the people whose presidential votes count the most.

Other research supports the idea that climate change is an important consideration for bipartisan voters. In South Carolina, a state that votes for the Democratic nominee this Saturday, addressing climate change is a top issue. A January poll conducted by Conservation Voters of South Carolina and Audubon Action Fund found that 64 percent of all South Carolinians think climate change is a serious problem. Only 13 percent of folks surveyed for that poll self-identified as liberal, and only 31 percent said they were Democrats. It’s clear that rising temperatures aren’t just an issue for diehard Democrats anymore — other slices of the political spectrum are starting to get in on the climate action.