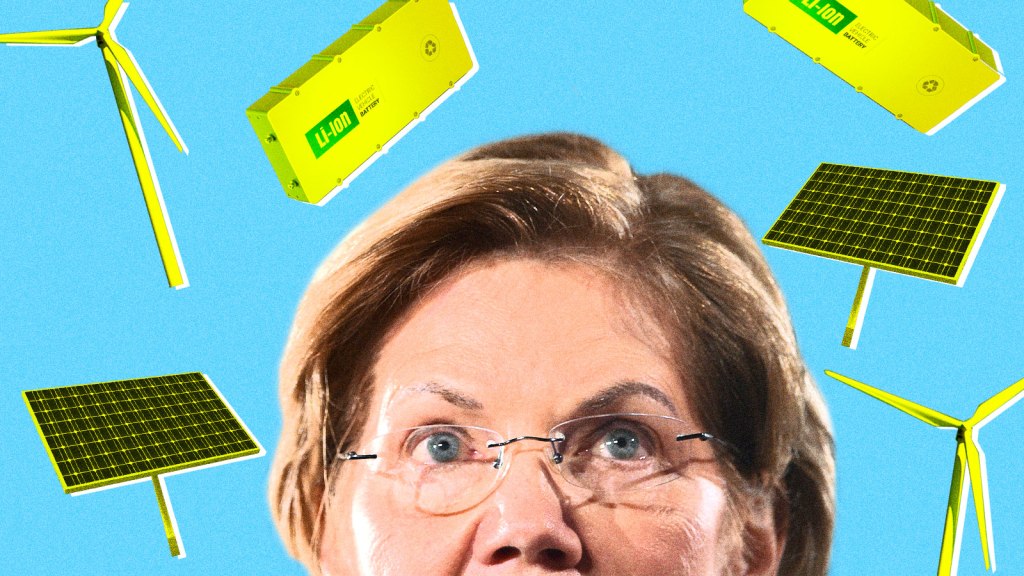 Grist / Petmal / David Becker / Getty Images
Will YOU BE MINE?

Most of the Democratic presidential candidates have made their views toward public lands quite clear: Extractive industries, like drilling and mining, don’t have a future there. But recently, Elizabeth Warren signaled that she might be willing to make an important exception.

At the Democratic presidential debate in Las Vegas last week, the climate policy discussion took an unexpected turn when debate moderator Jon Ralston asked Warren how she reconciled her plan to ban drilling and mining on public lands with the fact that we’ll need more of certain metals, like lithium and copper, for renewable energy. Warren’s response? If a particular resource is mission-critical to our future, then perhaps she’d bend the rules.

“So, look, I think we should stop all new drilling and mining on public lands and all offshore drilling,” Warren said. “If we need to make exceptions because there are specific minerals that we’ve got to have access to, then we locate those and we do it not in a way that just is about the profits of giant industries, but in a way that is sustainable for the environment.”

It was a brief exchange, but a significant one. It’s rare for climate policy conversations to touch on the resources needed to transition away from fossil fuels. For the subject to come up during a presidential debate is even more unusual (it’s happened only the one time in this election cycle’s 10 debates to date). But the topic deserves more than a 10-second response, since it’s central to the world’s ability to stave off catastrophic climate change.

That’s because the technologies humanity is staking the planet’s future on — wind turbines, solar panels, batteries, and fuel cells, to name a few — require dozens of different minerals, all of which are mined from the earth. The batteries inside electric cars are made of lithium, along with a mix of other metals that can include nickel, copper, cobalt, manganese, and graphite. The magnets that drive electric vehicle and wind turbine motors get their strength from the rare earth metal neodymium, and often a dash of its even rarer cousin, dysprosium. Solar panels rely on a cocktail of exotic minerals that can include cadmium, tellurium, germanium, and selenium, to transform sunlight into energy.

As our appetite for clean tech grows, demand for these minerals is expected to skyrocket. A 2018 paper found that in order to limit global warming to less than 2 degrees C, the stock of minerals available for electric car batteries alone will need to increase 87,000 percent. In that same scenario, the wind and solar photovoltaic industries will require 1,000 percent and 3,000 percent more resources, respectively, than they do today.

“The sheer scale of the material needs are fascinating,” said Benjamin Sovacool, a professor of energy policy at the University of Sussex in the UK who authored a recent paper in Science discussing this metallurgical challenge. “I was blown away by how much new stuff we’ll need.”

At least some of America’s future demand for these minerals might need to be met with new domestic supplies if we don’t want access to a critical resource cut off during, say, a trade war with China. Warren’s willingness to alter one of her signature policy proposals when it comes to minerals demonstrates that she understands the messy, extractive politics of the green energy transition.

It’s no accident that Warren got a minerals question in Nevada. The state, which includes some 56 million acres of federally managed public land, accounts for a sizable fraction of the Bureau of Land Management’s active mining claims. It’s already home to the nation’s only operational lithium mine — the Albemarle mine at Silver Peak — and several companies are hoping to ramp up production of the coveted battery metal. These include Lithium Americas, which is currently seeking BLM approval to set up a large lithium clay mining operation on public land.

But if Nevada is a state that would be eager to claim exceptions to Warren’s mining moratorium, it’s also a case study in the risks of a green tech–fueled mining boom. As Politico recently reported, one of the BLM’s Nevada offices has come under fire recently for allegedly disregarding environmental rules to fast-track mining projects, including a proposed lithium mine that could threaten a rare Nevada wildflower. Some environmental groups worry that the Trump administration’s recent push to shore up domestic supplies of “critical minerals” — a list that includes lithium, among other green-tech metals — will leave public lands even more vulnerable, particularly in states that resist federal oversight. Included in the administration’s critical minerals strategy is an explicit directive to “expedite” environmental reviews.

With all this in mind, the second half of Warren’s response — that any new mining projects would have to place sustainability front and center — may be just as significant as the first. While there’s no such thing as impact-free mining, Sovacool said he’s seen mines for the very same minerals that are “10 to 20 times worse than other mines.”

“There’s usually a race to the bottom to comply with the minimal regulations,” he said. “I think this gets to the heart of Warren’s response: There are ways to do this mining that would minimize environmental impacts.”

All of the leading Democratic presidential candidates have promised a moratorium on new fossil fuel leases on federal lands, but few candidates have made explicit statements about other types of extraction. A spokesperson for Mike Bloomberg’s campaign told Grist that he would “make exceptions for mining on a case by case basis,” for instance, where mining is “critical to America’s role as a global leader in producing and manufacturing clean energy technology.” None of the other leading Democratic contenders’ campaigns responded to Grist’s request for comment on the matter.

Opening new mines isn’t the only, or even the primary, way America will meet its rising demand for minerals, though. The reality, said Clare Church, a policy analyst at the International Institute for Sustainable Development, is that it can take years or even decades for new mines to begin producing. In the near term, that means the world is going to be relying more heavily on existing supply chains. Unfortunately, some of these trace back to mines in countries riven with violence, where protections for workers and the environment are weak to nonexistent.

“With that said, we should be focusing our efforts not on avoidance but on responsible sourcing and transparency in the existing supply chains of these key minerals,” Church said.

More recycling will also be key. As recently as 2011, less than 1 percent of rare earth elements were recycled. Today, fewer than 5 percent of lithium-ion batteries are. The processes for getting metals back out of dead devices like batteries are often complex, costly, and inefficient, but with increased investment in recycling technologies, that could change.

“There are better ways to meet our growing mineral demand than new hardrock mining,” said Aaron Mintzes, senior policy counsel at Earthworks, adding that investments around the world have “spurred innovations in recycling and reuse of lithium and other metals.”

The need for better recycling technology and infrastructure has made its way into some candidates’ climate plans. Bernie Sanders’ Green New Deal plan, for instance, calls for building tomorrow’s wind turbines, solar panels, and electric cars with “as many recycled materials as possible,” and establishing a national recycling program to get the job done.

However, as Saleem Ali, an environmental researcher at the University of Delaware noted, there isn’t a large enough stock of recycled metals on the market today to meet the projected growth in demand. Ultimately, he said, “some metal mining will still be needed for the foreseeable future to meet demand for a range of technologies needed for a low carbon transition.”

Rising to the challenge of the climate crisis won’t be easy. It’s going to mean making hard choices about what sorts of extractive industries humanity can no longer afford — and which it can’t afford to lose. Hopefully, America’s next leader will be up to the task.