I wrote yesterday about PR maestro Richard Berman, aka Dr. Evil, the Mozart of shilling for malign corporations. The post discussed his strategies at a fairly abstract level.

Let’s take it down a notch and look at a specific issue: EPA power-plant rules for carbon emissions. What I think this will help demonstrate is that, while Berman is an important cog, he is only a cog; part of a machine built for exercising power on behalf of concentrated wealth. Within the machine, the boundaries between analysis and advocacy, academics and lobbyists, persuasion and money are blurred to the point of vanishing.

As you know, dirty-energy industry groups and conservatives (insofar as there’s any meaningful distinction) are attacking EPA’s carbon rules with every weapon they can conjure. One of the leading groups involved is the American Legislative Exchange Council (ALEC), which is fairly notorious by now. Another is the lesser known State Policy Network (SPN), a network of right-wing think tanks at the state level. Both the groups are “Koch-funded,” in the current argot, though there are, of course, many other corporate funders as well.

In 2015 so far, the SPN has helped push seven studies on the impact of the EPA carbon rule, studies done by the Beacon Hill Institute (BHI), a right-wing think tank housed in Suffolk University in Boston. The BHI’s executive director, a professor at the university named David Tuerck, used to defend tobacco companies back in the ’70s and ’80s and is now a frequent speaker at the Heartland Institute, the denialist think tank famous for comparing those who acknowledge climate change to the Unabomber.

BHI and its subsidiaries have issued one national report and one each for six states: Iowa, Louisiana, New Mexico, North Carolina, South Carolina, and Wisconsin. According to spokespeople, reports are soon to come for Alaska, Minnesota, Mississippi, Nevada, Ohio, Rhode Island, Tennessee, Utah, Virginia, and Washington.

Here’s a funny story about BHI. A while back, it was looking for funding for studies that would similarly exaggerate the costs of the northeast Regional Greenhouse Gas Initiative. It approached the right-wing Searle Freedom Trust foundation, saying — before having done the research! — that “success will take the form of media recognition, dissemination to stakeholders, and legislative activity that will pare back or repeal RGGI.”

Suffolk University found out about this and shut it down, as The Guardian reported:

In a prepared statement, Suffolk University made clear it had not been consulted about Beacon Hill’s research plans — and would not have authorised the grant proposal if it had been.

“The stated research goals, as written, were inconsistent with Suffolk University’s mission,” Greg Gatlin, the university’s vice-president for marketing and communications, said in an email.

Gatlin went on to write that Beacon Hill had not followed university rules when it submitted its grant proposal, which was presented for consideration to the Searle Freedom Trust, a leading funder of ultra-conservative causes, on Beacon Hill’s behalf by the State Policy Network, a coalition of similar ultra-conservative entities.

You kind of have to wonder why Suffolk allows BHI to remain at the university. Aren’t they embarrassed?

Anyway, BHI did not have any trouble getting funding for its work attacking Obama’s Clean Power Plan. It found a willing funder in a benign-sounding nonprofit called the Employment Policies Institute.

That name ring a bell? It should: It’s one of Berman’s front groups, a way for corporations to funnel money into his PR firm without any fingerprints. Now he’s helping them funnel money into studies explicitly shaped to produce particular policy outcomes.

Take a look at this fact sheet summarizing one of BHI’s reports on Obama’s power plant rules, released by the Palmetto Promise Institute, the South Carolina affiliate of the State Policy Network. At the end it says:

This edition of Fast Facts is a summary of The Economic Effects of the New EPA Rules on the State of South Carolina produced in collaboration with The Beacon Hill Institute at Suffolk University, and the Interstate Policy Alliance.

The Interstate Policy Alliance is a subsidiary of the Employment Policies Institute, Berman’s group.

If you’re having trouble keeping these groups straight in your mind, here’s a valiant attempt by the Center for Media and Democracy to chart the connections: 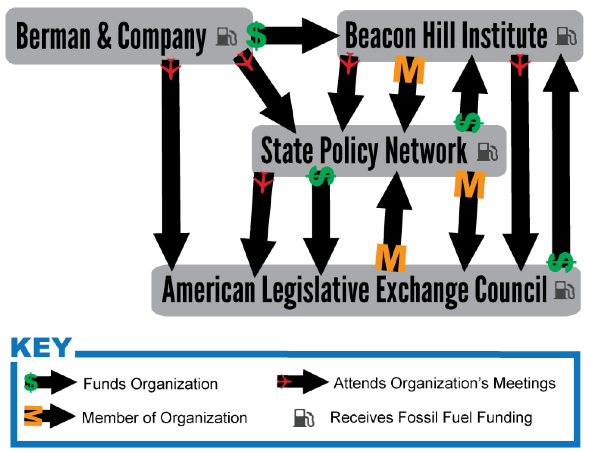 Seems like a totally credible intellectual enterprise to me!

But of course the state politicians and attorneys general who are the target audience of these reports don’t care; most of them, especially in coal states, are fossil-funded too. Nobody involved is this whole stage production is interested in an accurate, unbiased assessment. That’s not the point. The point is to translate concentrated wealth into political outcomes.

It is helpful to politicians to have reports and analyses from legitimate-sounding organizations that seem to bolster their policy positions, so concentrated wealth creates the organizations and the reports. It is helpful to the media to have an “other side” to public-health initiatives, and the naked special pleading of corporations isn’t particularly compelling, so the interests of concentrated wealth are laundered through nonprofits and think tanks to clean them off and give them a sheen of authority.

The machine creates whatever tools are required to exercise power. Whether the end product is called “analysis” or “lobbying” is all but irrelevant.

It’s a mistake to ask whether this is wealthy people defending their financial interests or wealthy people expressing their ideology, or which motivation is really in the driver’s seat. The triumph of modern conservatism is that it has collapsed the distinction. The interests of the wealthy are the ideology. Fossil fuels are the ideology. They’re bubbling in the same ethno-nationalist stew as anti-immigrant sentiment, hawkish foreign policy, hostility toward the social safety net, and fetishism of guns, suburbs, and small towns. It’s all one identity now. The Kochs (and their peers) are convinced that their unfettered freedom is in the best interests of the country. There’s no tension.

Concentrated wealth wants political results congenial to concentrated wealth. It has shaped an entire movement to that end, and the movement has absorbed all ancillary institutions, including supposedly independent, knowledge-producing institutions like academia and think tanks and supposedly public-interest-serving institutions like NGOs. The money flows from the wealthy and their corporations to PACs and foundations, to nonprofits and advocacy groups, to PR firms and activists. It’s like an electric charge going through a field of iron shavings, orienting them all in the same direction.

Policymakers are surrounded by the worldview of the wealthy; it comes at them from think tanks, lobbyists, activists, media, and their own social circles, becoming like water to a fish.

Berman is a significant player in this machine. He’s trying to get the public behind the interests of concentrated wealth, or at least blunt public opposition to those interests, and he’s willing to do a lot of ugly work and take a lot of heat to do it.

But in another sense, he is merely an inevitable result of the cascade of money. If he did not exist, someone else would do what he does. The machine also makes cogs.