There was a story in The New York Times last October that didn’t get the attention it deserved. It was about a speech given last June in Colorado Springs to a bunch of energy executives by “Dr. Evil,” i.e., Richard Berman, the guy who does PR for pretty much every nasty industry you can name.

Berman is notorious. This Boston Globe investigation is probably the best single-serving account of his history and tactics, but you can find similarly damning stories in The New York Times, Mother Jones, 60 Minutes, and many other outlets. And you can peruse Berman Exposed, a project of Citizens for Responsibility and Ethics in Washington.

Berman’s genius lies in exploiting what is legal. If a business or industry wants to fight off a public-interest campaign — against corn syrup, say, or against fracking — it can hire PR firms itself. But that leaves it open to negative public opinion. No business wants to be the face of a controversial campaign.

What Berman does is start nonprofit “educational” groups as a thin front for his business. The Center for Consumer Freedom works to discredit anti-obesity campaigns. The Employment Policies Institute battles campaigns to raise the minimum wage. And so on. (He’s got dozens). These groups often have no address but that of Berman and Company, no employees but Berman, and no one on their boards but industry reps and current and former Berman and Company employees.

The nonprofits then hire Berman and Company to run PR campaigns. The beauty of this arrangement, from industry’s perspective, is that nonprofits don’t have to disclose their donors. So industries can funnel money to Berman without being identified with it. And he can say and do things they would never, ever be publicly associated with. The nonprofit groups serve, effectively, as money laundering/anonymizing operations.

What’s more, the media is very often too lazy to check into legit-sounding nonprofits, so these front groups get op-eds placed, representatives on news shows, and “studies” reported to the public, all without being identified as agents of industry. It’s quite the racket. 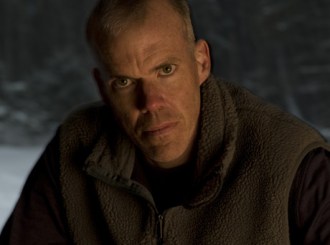 Bill McKibben, pondering how best to strangle your puppies.

Berman’s latest target is greens. He’s got front groups going after EPA power plant rules, the fossil-fuel divestment movement, and anti-fracking activists. For a taste, you can check out his BigGreenRadicals.com, which is worth your time if only to appreciate the hilariously evil-looking picture of Bill McKibben they dug up.

This is all quite lamentable and has been lamented at length, many times. I mean, Berman is so scummy his own son has publicly and vociferously denounced him. But he doesn’t care.

And that’s why it’s worth listening to him, and worth reading the transcript of that speech he gave energy execs. It’s a fascinating discourse on how to shape public opinion by someone who is a) very good at it and b) utterly unburdened by scruples. This is how to win when you don’t care about decency or honesty or the opinion of your peers. This is how to win when you only care about winning.

My impression, when I hear liberals discussing public opinion and communications, is that they often conflate what will work with what is good or righteous or honest. Their goal is to change public opinion, yes, but they are also keenly interested in being viewed a certain way, in being perceived as honest or objective or nonpartisan. They confuse strategies that appeal to them, their own values and worldview, with strategies that produce desired outcomes.

Berman doesn’t have that problem. Everyone sees him as an evil turd and he doesn’t care, at all. He really only cares about moving the needle, defending his corporate clients, and fighting off the “nanny state.” He only cares about winning. It lends a certain clarity to his thinking.

With that in mind, let’s look briefly at what he says in that speech, along with some illustrative videos of his work.

1. Always be on the offensive.

The key is to shape public judgment. “If you want public judgment on your side, you have to start the conversation,” Berman says. “You’re on defense if you’re responding to somebody else.”

You always attack, frame the issue, establish the battlefield. If you are responding to someone else’s accusations, even if your defense is accurate, you are losing.

2. The best offense is ad hominem.

Berman is explicit and unapologetic that going on the offensive means “shooting the messenger,” i.e., discrediting opponents, depriving them of moral authority. “The logic of the offense campaign,” Berman says, “is diminishing the other side’s ability to capture people’s imagination and to become credible.”

He goes after the people and groups running public-interest campaigns and tries to “reposition” them in the public’s mind as unelected, greedy, meddlesome nanny-staters. He’s done it to the Humane Society, unions, and now green activists.

The value of this strategy is that trust undergirds all factual disputes. If you stop trusting, say, the Humane Society, if you start viewing it as a money-making bureaucracy, then it doesn’t matter what the Humane Society says about any specific issue, or the facts it marshals. You’ve made a judgment about them.

3. Being first, establishing common knowledge, is half the game.

“You know the guy that gets to make the first opinion, the first impression, has a huge advantage,” Berman notes, “because people don’t want to admit they were wrong the first time.” Getting out first and broadly helps create what he calls “common knowledge,” i.e., the kinds of things that “everybody knows,” even though most people can’t tell you where they heard it.

His example: Everybody knows that driving is more dangerous than flying. In most cases people can’t tell you exactly where they heard that, or cite any statistics, but they just … know it. It’s out there.

Once something becomes common knowledge, it is extremely difficult to dislodge it. This is part of the brilliance of the right-wing media machine. It surrounds conservatives with dozens of voices, all saying the same thing, which leads to the strong impression that, hey, where there’s smoke, there’s fire. This is how all conservatives “know” Obamacare is failing, even though it is succeeding beyond expectations.

When you are defending the status quo, you don’t necessarily need to convince the public that your side is right. You just need to confuse the issue. If you make people doubt the other side’s messengers and fill the air with a bunch of contradictory statistics and facts, most people won’t have the wherewithal to dig through it all. They will simply tune out:

You get in people’s mind a tie. They don’t know who is right. … People are not prepared to get aggressive in moving one way or another. I’ll take a tie any day if I’m trying to preserve the status quo.

This is one reason why preventing change is easier than generating it.

Berman doesn’t get into this in the energy speech, but he has touched on it elsewhere. Here’s a bit from the Globe story:

Berman gave one of his most revealing talks about his strategy in a locale far from his Washington office. Meeting with a group of Nebraska farmers in 2010, he told them it was more effective to “hit people in their heart rather than their head,” according to a report on the talk by Nebraska Farm Bureau News. “Emotional understanding is very different — it stays with you. Intellectual understanding is a fact and facts trump other facts. When I understand something in my gut, you’ve got me in a very different way.”

Berman then explained why he believes such attacks work. “People remember negative stuff,” Berman said. “They don’t like hearing it, but they remember it … We can use fear and anger — it stays with people longer than love and sympathy.”

I’ll leave you with a series of questions.

A) Could you, or would you, behave like Dr. Evil on behalf of clean energy or climate mitigation?

B) If there were a Dr. Evil of clean energy or climate mitigation, would you hire him?

C) Would you give money to a nonprofit front group that funneled money to him, if you knew the donation would never be disclosed?

D) Would you publicly denounce him if his tactics came to light?

My strong suspicion is that if a Dr. Evil did pop up fighting for progressive causes, liberals would line up to disown him, thus demonstrating their precious independence and moral superiority. My further suspicion is that, of the vast amount of money being spent by left-leaning foundations, green NGOs, and clean energy industry groups to shape public opinion about climate change, approximately zero of it is being deployed with the same ruthless, unscrupulous ferocity that Berman brings to defending the status quo. Is that a good thing?

Next post: What we can learn from Dr. Evil’s attack on Obama’s carbon rules

What foods should I take camping?