Your genes tell you how to vote 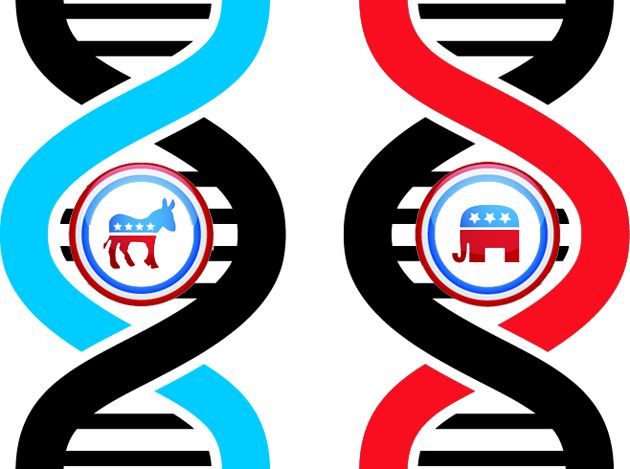 Your genes tell you how to vote

Where did your political and religious opinions come from? How did you come by them? What made you who you are?

If you’re like most people, you’re probably inclined to answer this question by citing two main influences: your upbringing and your life experiences. But according to a growing body of science, such an account leaves out a major factor: your genes.

“The basic idea of a heritable component to political beliefs has been around for at least a quarter of a century,” says University of Nebraska-Lincoln political scientist John Hibbing, coauthor of the new book Predisposed: Liberals, Conservatives, and the Biology of Political Differences. “It’s shown up too many times, in too many different places, with too many samples. So there’s something there.”

The science dates back at least to 1986. In that year, the prestigious Proceedings of the National Academy of Sciences published a paper using a classic “twin study” design to try to determine the heritability of a variety of political attitudes, such as views on the death penalty. The researchers concluded that genes could explain a substantial percentage of the variation in responses to an oft-used political questionnaire called the Wilson-Patterson conservatism scale.

Since then, scientific papers reaching a similar conclusion have proliferated, leading up to yet another one published in this month’s issue of the journal Political Psychology by Hibbing and his colleagues. Most of these studies use the same basic design: The political views of members of monozygotic (“identical”) twins pairs, who share 100 percent of their DNA, are compared with those of dizygotic (“fraternal”) twin pairs (who share only 50 percent of their DNA, on average). Naturally, identical twins are much closer to one another on many traits, and we all acknowledge that the reason for this similarity is genetic. But the big surprise is that political beliefs, again and again, turn out to be one of these traits shared more among identical than among fraternal twins.

Using this “twin study” paradigm — which is widely employed to determine the heritability of a variety of traits, such as eye color and height — researchers can estimate what percentage of a given characteristic is rooted in genetic influences rather than environmental influences. The twin study approach then attributes the remaining variability to either factors in the environment that lead twins to be similar (“shared environment”), or those that cause them to be different (“unique environment”). “Maybe you saw a robbery, and your twin didn’t,” Hibbing explains. For politics, the studies tend to suggest that genes and “unique environment” experiences provide the bulk of the explanation, with “shared environment” seeming to matter relatively little. (Given that “shared environment” is usually taken to include influences on both twins in the home as they grow up, this may be the most surprising finding of all.)

And it isn’t just our political beliefs: It’s a range of complex social traits. Personalities have also been repeatedly shown to have a substantial genetic basis, and so has religiosity. None of this research, to be sure, says that genes determine everything. The “environment” still matters a great deal. Nonetheless, the percentage of total variation in our views attributed to genes is quite substantial. According to Hibbing, the body of published evidence is homing in on a number around 30 to 40 percent for our political views.

The truly interesting question then becomes: Precisely which genes are determining our political views, and how are they operating? That’s where it gets tricky: Scientists don’t really know. Arguably the best study seeking to identify a single political gene examined DRD4, a gene coding for a receptor for the neurotransmitter dopamine in the brain. One variant of DRD4 has been associated with novelty-seeking and exploratory behavior, and sure enough, the study found that it was also associated with liberalism — but only, the paper noted, among those who had a lot of friends growing up. In other words, the scientists didn’t actually find a “political gene”; what they found was a gene that has political implications in a particular life context.

Genes operate, after all, in constant interaction with our life experiences. And when it comes to politics, scientists expect that myriad genes are involved, each one having relatively small, context-dependent effects. The route from genes to pulling the lever in a voting booth is a long and circuitous one indeed.

Nonetheless, the twin studies suggest that the total genetic influence adds up to something pretty substantial. What Hibbing and his colleagues suspect is actually being inherited is a set of core dispositions about how we want society to be structured and run. Thus, the latest study showed a substantial genetic influence not only on people’s self-described political ideology, but also on their responses to questions asking whether “society works best” when “those who break the rules are punished” as opposed to when “those who break the rules are forgiven,” and when “people are rewarded according to merit” as opposed to when “people are rewarded according to need” (to give a few examples).

Dealing with distributing resources, and punishing misbehavior, are problems that our ancestors would have had to solve constantly. So it makes sense to think there are deeply embedded patterns in how we approach them. “We are social creatures at the core,” says Hibbing. “We get together in these groups, and we know how to do it.” Group-oriented behavior comes naturally, and so do views about how groups should operate.

The real problem, of course, is that “naturally” means something different for Democrats and Republicans.