Hungry Arctic mosquitos are coming for you, Rudolph 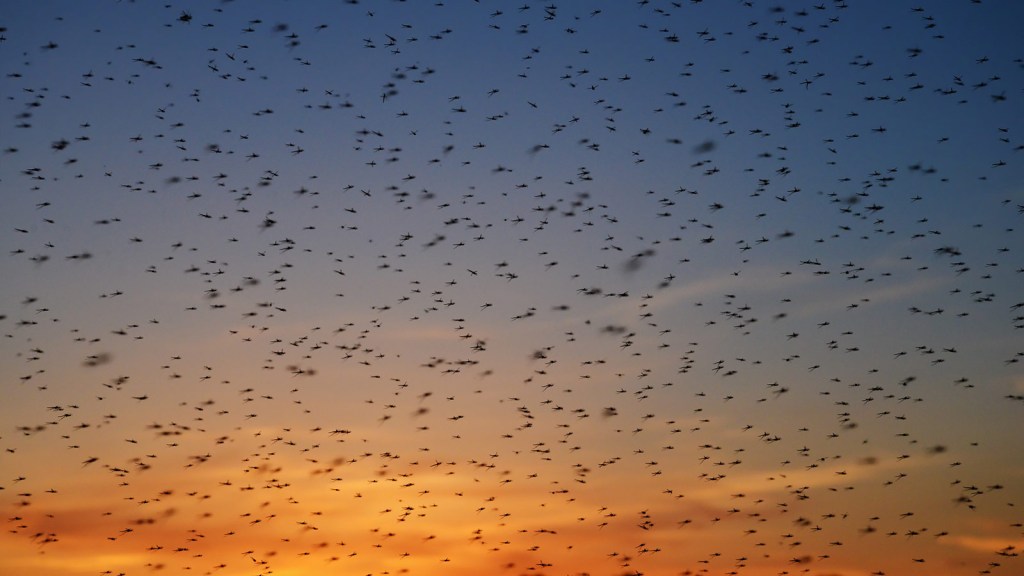 Hungry Arctic mosquitos are coming for you, Rudolph

Hollywood has done a bang-up job turning harmless animals into terrifying killing machines. We’ve seen birds peck out eyes, ants rampage through towns, slugs eat people from the inside out, and bees kill by the thousands. And now, coming to a climate-changed Earth near you, giant mosquitos hungry enough to kill small animals and send 300-pound caribou running for the hills! “They’re aggressive because they’re desperate …”

Unfortunately, that’s not a soundbite from the latest animal-themed horror movie trailer. It’s an actual quote from Lauren Culler, an ecologist at Dartmouth’s Institute of Arctic Studies. Motherboard accompanied Culler on a research trip to a small town in West Greenland, where climate change is giving these little devil bugs a leg up on their caribou prey. Here’s the scoop from Motherboard:

When mosquitoes emerge is dictated by their incredible sensitivity to temperature. In fact, a Greenlandic mosquito egg won’t hatch until it’s been frozen and then warmed. Because mosquito ponds are so shallow, they’re one of the first things on the landscape to thaw, so in years when spring comes early, the mosquitoes come early.

“… when spring comes early, the mosquitoes come early.” Come on — this is kitchy horror flick gold! OK OK, back to the science:

While the biology of a mosquito is driven by temperature, the biology of a caribou is driven by seasonal changes in day length which are unaffected by climate change. Every spring they migrate from the coastal town of Sisimiut, where winters are milder, to Kangerlussuaq to birth their calves. In the past, their cycle was timed so their arrival coincided with when the fields were filled with young, nutritious plants and the mosquitoes were not yet biting. But as the Arctic warms, the plants sprout earlier, leaving the caribou older, tougher, and less nutritious options. …

Meanwhile, the mosquitoes have reached adulthood and are ready to dine. Unlike humans who can swat mosquitoes, wear nets and repellants or retreating indoors, caribou only have one form of defense of mosquitoes: they can run. They’ll run to windy locations, and even on top of glaciers to avoid mosquito harassment.

To be fair, the mosquitos aren’t actually that giant. A picture in the Motherboard article showing a few of them lying next to a mechanical pencil reveals the biggest specimens to be just a few millimeters long. Still, those fleeing caribou aren’t complete wimps — the bloodsuckers have been known to kill caribou calves. And that’s not just bad news for Rudolph, it’s also bad news for all the people who like to eat Rudolph. In 2011, Greenland (population 56,000) hunted more than 12,056 caribou, according to Motherboard.

On the bright side, “… the mosquitoes have reached adulthood and are ready to dine.” Hollywood: Please, do what you do best and turn this shitty situation into the kind of mindless entertainment that people will go pay $10 to see at the mall. Here’s some inspiration: