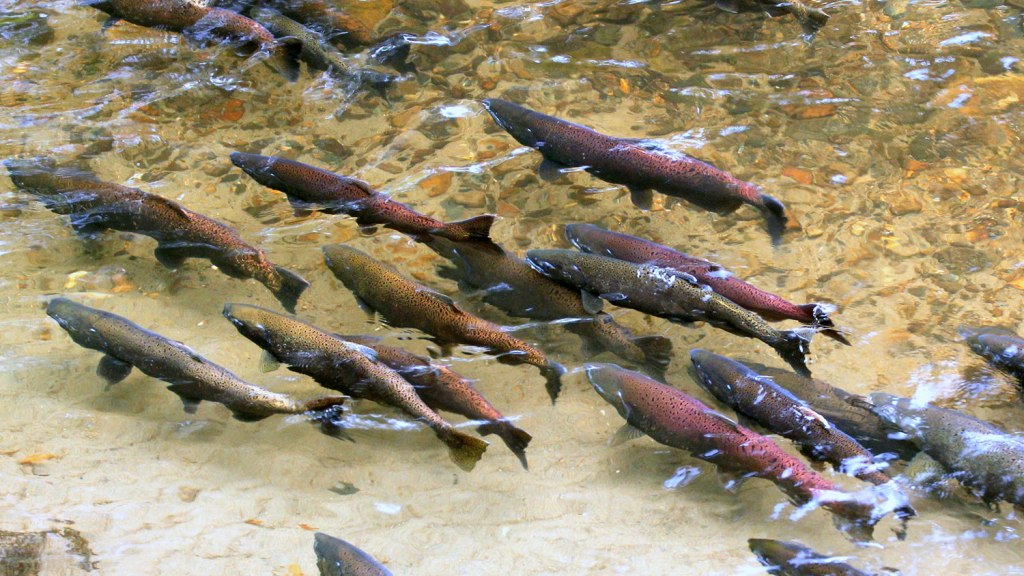 Move over, ocean acidification — or don’t, actually. “Freshwater acidification” doesn’t have quite the same ring to it, though it is happening, thanks to the same carbon emissions currently souring the seas. And apparently fish are feeling the burn already, according to a study in Nature on juvenile pink salmon. From Scientific American:

The study was among the first to look at how different CO2 levels could affect fish larvae in fresh water, according to the lead author, Michelle Ou, a former master’s student at the University of British Columbia in Vancouver.

“We didn’t actually expect to see so many effects,” she said. “We were just poking around to see what we could find.”

Pink salmon seemed like a good species to start with. Not only are the fish abundant and economically important, but they also serve as a keystone species … Although pink salmon spend their adulthood in the open ocean, their first weeks of life are in freshwater streams.

It turns out that, while adult fish do pretty OK with changing water chemistry, larvae exposed to elevated CO2 levels showed some significant changes:

They found that not only were they smaller and lighter, but the fish’s senses were also impaired. The pink salmon larvae were more bold around new objects and did not seem to be afraid of alarm cues in the water that would normally prompt fish to flee.

The fish also had an impaired sense of smell that prevented them from recognizing specific amino acids associated with the streams where they were born. This was significant because recognition of those amino acids is believed to play an important role in the fish’s navigational ability, said Ou.

If you know much about what salmon have to do — namely, navigate from the open ocean back to the exact tributary of the exact stream in which they were spawned — you will recognize that this is potentially A Very Bad Thing. But just how acidic are rivers going to get in the future? Since bodies are freshwater are typically smaller than the ocean (no, duh) pH levels are likely to wobble around more depending on immediate conditions. Still, way, way more research is needed.

So get on it, science. Meanwhile, I’m gonna go ahead and guess we should try to stop this runaway carbon emissions thing, how’s that sound?