The odd behavior was first observed by researchers in 2014 on a small fjord in Svalbard, Norwegian High Arctic, according to a new study published in Polar Research. Since then, six bears have been spotted eating the dolphins in that area. The dolphins were stranded in the Arctic because their migration patterns were disrupted by warmer weather, reports the Independent. Here’s more:

Usually, the dolphins only go up north during the warmer summer — but this year they have arrived in spring.

“We suggest [the dolphins] were trapped in the ice after strong northerly winds the days before, and possibly killed when forced to surface for air at a small opening in the ice,” the authors of the study write. White-beaked dolphins tend to travel north to Svalbard during the warmer summer, but haven’t been reported so far north in the early Spring. 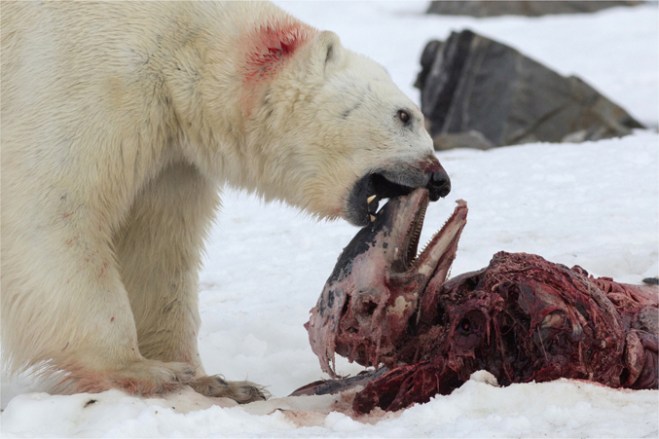 An adult polar bear feeding on the remains of a white-beaked dolphin in Raudfjorden on July 2, 2014. The dolphin is presumed to be a member of the same pod as the dolphins eaten by a bear in April.Polar Research

With food sources scarcer than ever, ice-trapped dolphins are probably a sight for sore polar bear eyes. Another sign that things are totally screwed up in the Arctic ecosystem: The bears are actually saving their leftovers by freezing them under the ice. Here’s the Independent with more:

After eating the dolphin, the bear seemed to cover it with ice so that it could be kept for later. Such behaviour is rare in polar bears, and could be a result of the animals not having enough to eat.

The authors of the study describe the bear as having “clearly visible ribs” and being “very skinny.”

The habitat of polar bears is shrinking drastically as the Arctic warms. As such, scientists expect to be able to observe them much less in the coming years.

Looks like the days of polar bear-dolphin peace, love, and cohabitation are over, folks. You have permission to weep into your old Lisa Frank folders, now.